In 1968, two African Americans  Tommie Smith and John Carlos medalled gold and bronze respectably, in the 200 meter dash at the Olympics.  However this Olympics was not just about sports. Sports have never been free from politics and 1968 was no different. Both Robert Kennedy and Martin Luther King Jr. had just been assassinated for their politics and standing against racial discrimination. Other black athletes were beginning to take a stand against racism including Muhammad Ali who threw his Olympic gold medal into the river when he was refused service from a white-only restaurant. Kareem Abdul Jabar had chosen to sit out the 1968 Olympics in protest of black mistreatment.

Smith and Carlos were no less frustrated with the state of the country. He and Carlos walked to the podium, shoes in hand with only black socks covering their feet to represent black poverty. Smith wore a black scarf to symbolize black pride, Carlos wore his track suit unzipped to demonstrate solidarity with blue-color workers. The beads strung around his neck were for those wrongfully lynched and killed. Everybody has seen this picture, most people know the story, but few know who the white silver medalist standing besides Tommie Smith and John Carlos is.

“As journalist Martin Flanagan wrote: “They asked Norman if he believed in human rights. He said he did. They asked him if he believed in God. Norman, who came from a Salvation Army background, said he believed strongly in God. We knew that what we were going to do was far greater than any athletic feat. He said, ‘I’ll stand with you’. Carlos said he expected to see fear in Norman’s eyes. He didn’t; ‘I saw love.'”

On the way to the podium, Norman saw an Olympic Project for Human Rights badge worn by white American rower Paul Hoffman. The OPHR was an organization dedicated to protest racial discrimination in America and racism in sports. Norman asked Hoffman if he could wear it. All three medalists wore the badge on the podium to demonstrate their support for human rights.

The gravity of Norman’s actions were huge, because at the time Australia was still very much an apartheid society and had discriminatory practices of his own. His resulting life and career suffered due to his alliance with the Black Power movement. At the 1968 Olympics his second place finish was an Australian national record, which still stands even today. Despite that, he was not selected to return to the 1972 Olympics despite running under the qualification times twelve times in the 200 meter dash and five times in the 100 meter dash. There are mixed opinions on this decision. Many believe it was because of his anti-racism stance, but the Australian Olympic Committee maintains that the reason was because to qualify for the Olympics one had to run under specified times and perform well at the Australian Athletics Championships. Norman had finished third at the Australian Athletics Championships behind two other Australian runners.

Norman and his family continued to be ostracized by Australia. He had difficulty finding a job, working as a gym teacher and at a butcher shop to make ends meet. In 1985, he nearly had to have his leg amputated when he contracted gangrene from a tear in his Achilles tendon at a charity race. He subsequently spiraled into depression, alcoholism, and a pain killer addiction.

For years Norman was offered a pardon from Australia if he condemned the actions of the two African Americans he stood with all those years ago. If he agreed he would have a chance at finding a stable job and joining in the 2000 Sydney Olympics. Norman refused and never turned his back on Smith and Carlos. The United States, upon hearing of his omission from the 2000 Sydney Olympics by his own country, invited him to take part. They also invited him to gold medalist Michael Johnson’s birthday celebration because Johnson’s hero was Norman.

In 2006 Norman died from a heart attack at the age of 64. Six years following his death, the Australian parliament offered a posthumous apology for the wrong done to him by Australia and for failing to send him to the 1972 Olympics. The US Track and Field Federation declared the anniversary of his funeral ‘Peter Norman Day’.

Peter Norman was the greatest Australian sprinter, but despite his contributions to Australian athletics he was ostracized for standing with human rights. At Peter Norman’s funeral both John Carlos and Tommie Smith gave eulogies to commemorate the huge sacrifices from their friend in the name of human rights.

John Carlos had said, “If we were getting beat up, Peter was facing an entire country and suffering alone.” 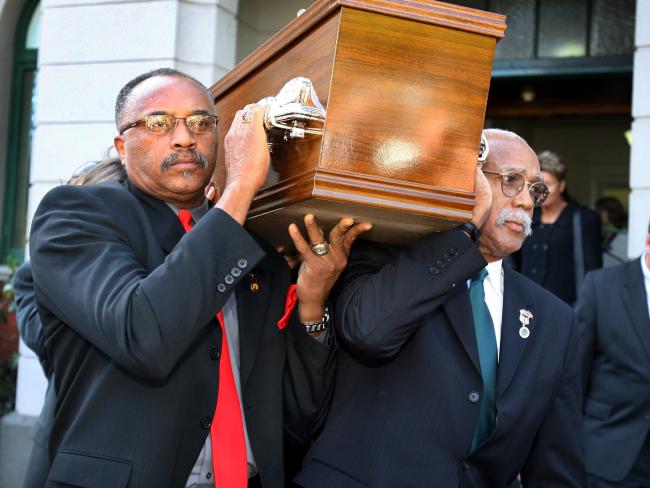 John Carlos and Tommie Smith carry Peter Norman’s casket at his funeral in 2006.

Summer Fashion Just Got Better with Double Icon. Bust Out of Quarantine in Style!

Beautiful, Sustainable Solutions for the Market and More