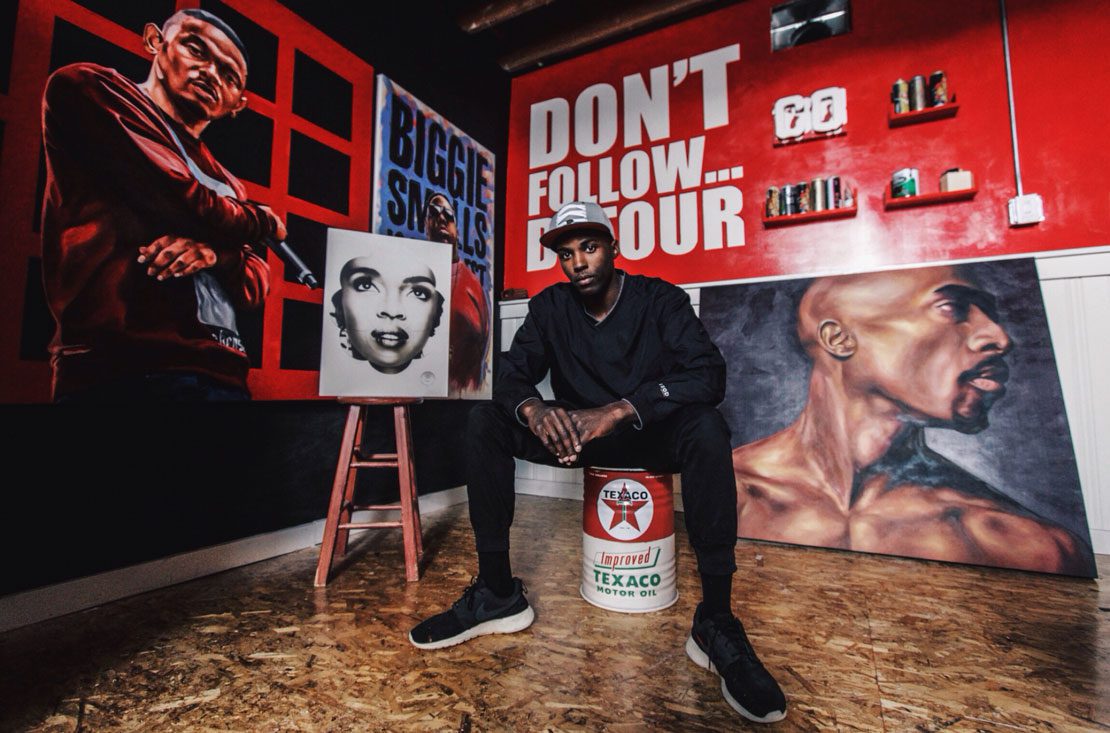 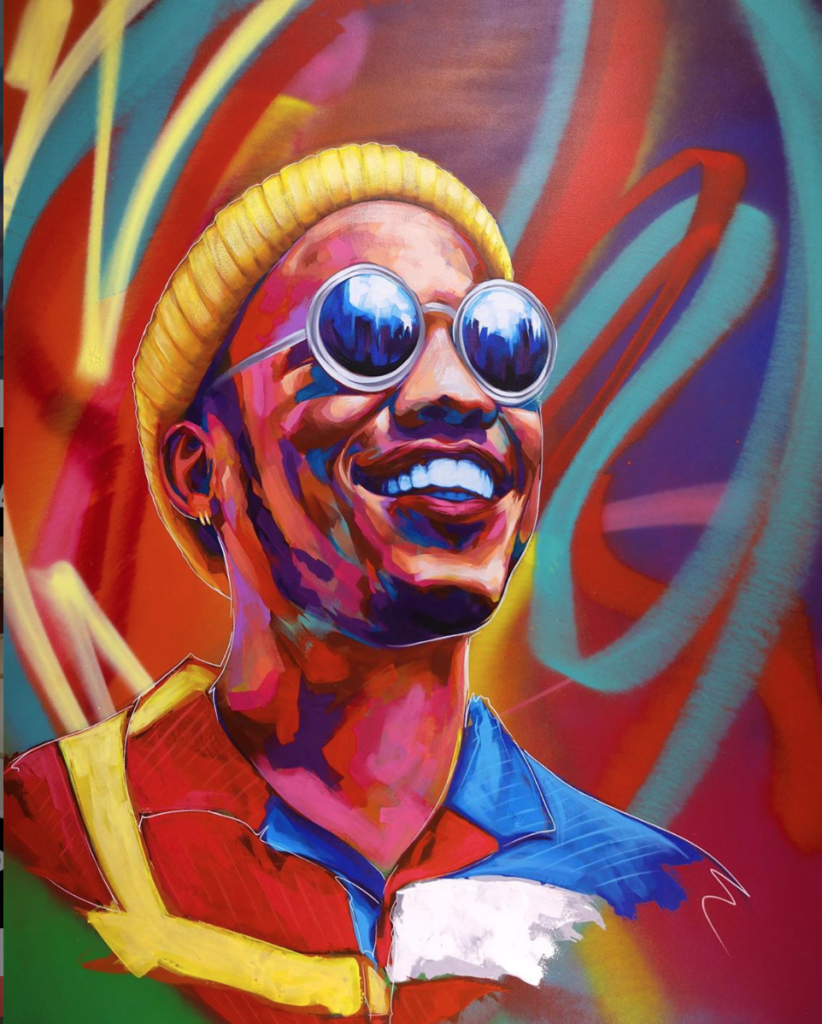 Where are you from?
I am originally from a little bit of everywhere. My dad’s military, so I moved around a lot. Born in Dayton, Ohio. Most of my family are from Georgetown, South Carolina, but moved everywhere. Went to high school in Germany and then got my Associates degree in southern Illinois, and then moved over to Denver about 2006, and been here ever since.

At what age did you notice that you were talented in making artwork?
Because I was moving around a lot, I would use art as a way to make friends. So portraits of my friends and teachers at every place I moved to. So really it was just a natural progression because I kept doing art all the time. And after I’d say, 2003, that’s when I started doing airbrush t-shirts on eBay, and I was making money with that. And so people wanted my artwork on t-shirts and you know, to do their name and everything and then I  eventually moved to canvas. And doing larger works after I’d say 2007 and 2008, but then really started doing full time, 2014. 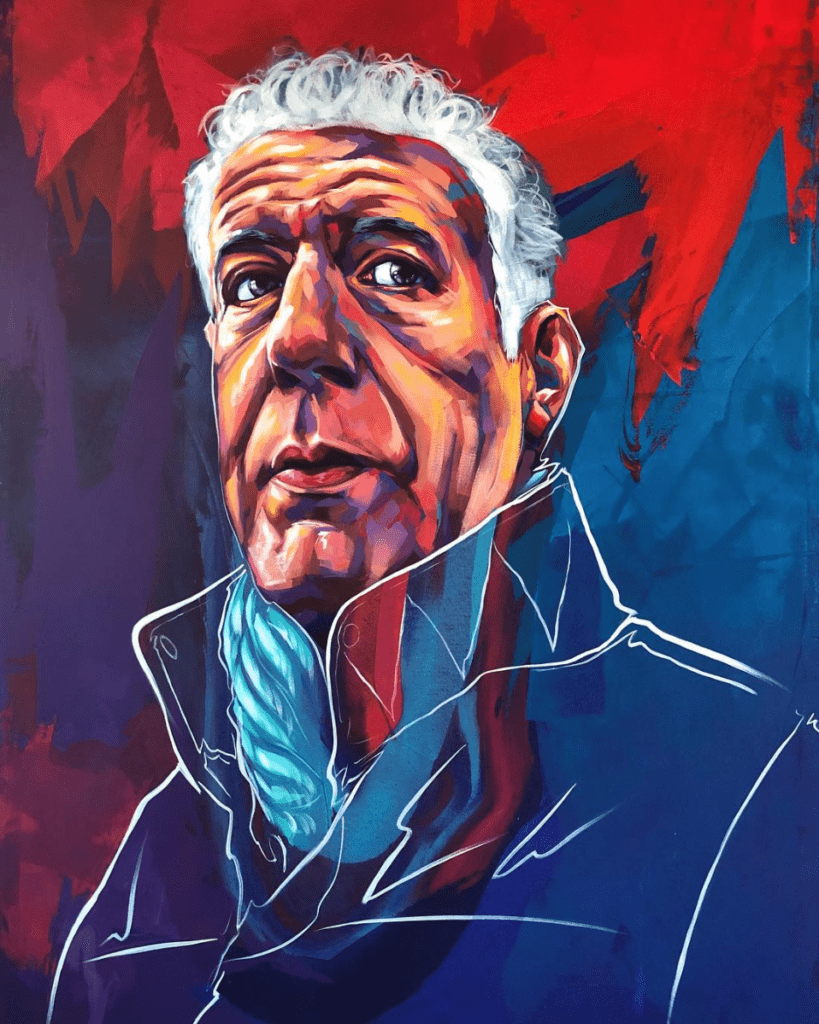 How did you get the name, “Detour”?
Detour came from a breakdance, VHS tape, that I had shipped to Germany, and it was from one of my favorite crews in California. So they created sort of like a compilation tape of their crew in different places and one of the words in the title was detour, and I just really liked it because it sort of exemplified everything I sort of wanted to aspire to be as like someone different and doing my own thing. So that’s where the name Detour came from. I’ve just been using that as I was doing tee shirts and now I’m doing murals and you know, studio art. So basically, I just kept that.

Do you have a formal education in Art & Design?
No, I do not. I don’t have a formal education in Art and Design. I went to school for Business Marketing and then went back to get my MBA in Business Administration. Basically, a lot of the Art and Design stuff just came from just doing. That’s the biggest thing cause I’ve been doing it since a kid. So, you know, I was just drawing as a kid and then everywhere I moved I drew. So it just came sort of naturally later in life when I started going to college. So you know, being sort of a person that likes to dip and dive into different sorts of mediums, and you know, interests of breakdancing, DJ’ing, technology, and animatronics, all that stuff. So I was sort of a curious person. I still am. So basically sort of bringing all that into the different ideas that I do have. 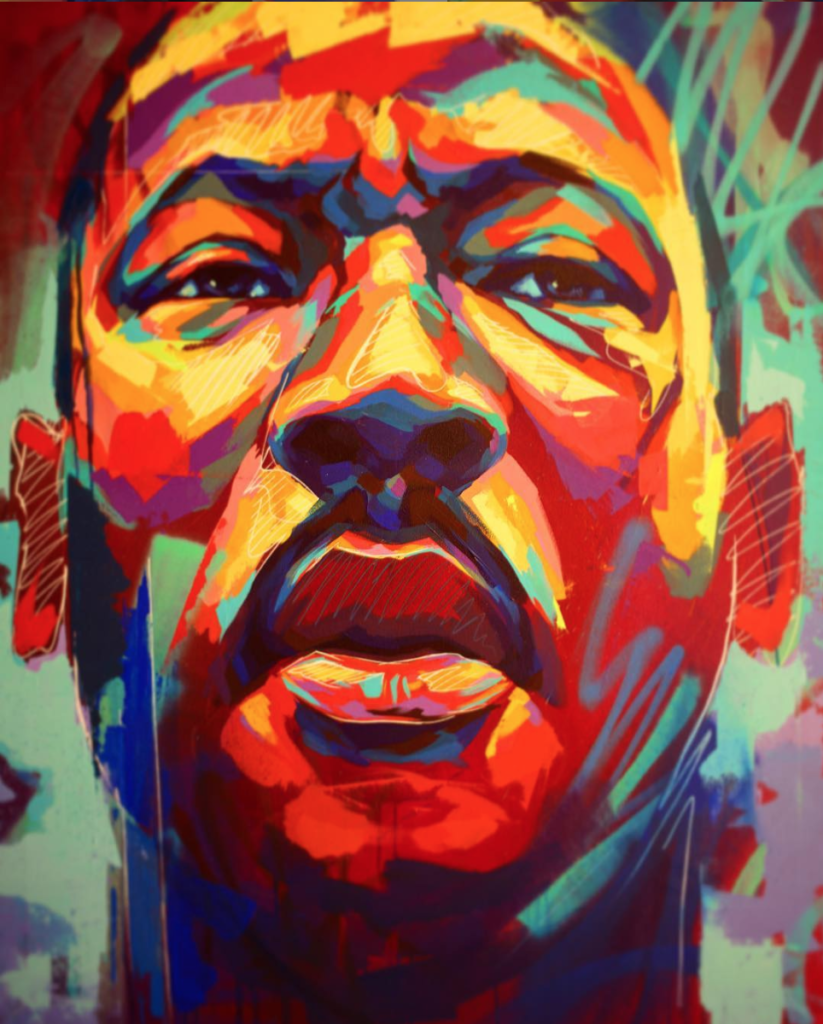 Is painting your full-time gig? If so, when did you decide to make it your career?
Yes, it is. So I started doing full time in 2014 and that was after spending about a little more than half a year in Tanzania, doing work out there. So basically, when I came back from Tanzania to the US, I decided to just try to figure out how to do art full-time, cause that’s really what I wanted to do. I just didn’t know how to do it. But Denver was growing, my friends were opening up a restaurant and my friend had a space that he bought that he turned into studio spaces. So, you know, everything just really aligned for me to sort of do art full time. So 2014 is when I decided to do that.

Out of all of the work you’ve done, which piece or collection is the closest to your heart? Why?
I’d say all of them. I can’t really pick which one because they all have something different. I get that question a lot, like is there like a favorite piece, but there’s not really any favorite one or any sort of one closest to my heart because they’re all different. They’re all sort of different parts of my curiosity that I’m trying to sort of explore. 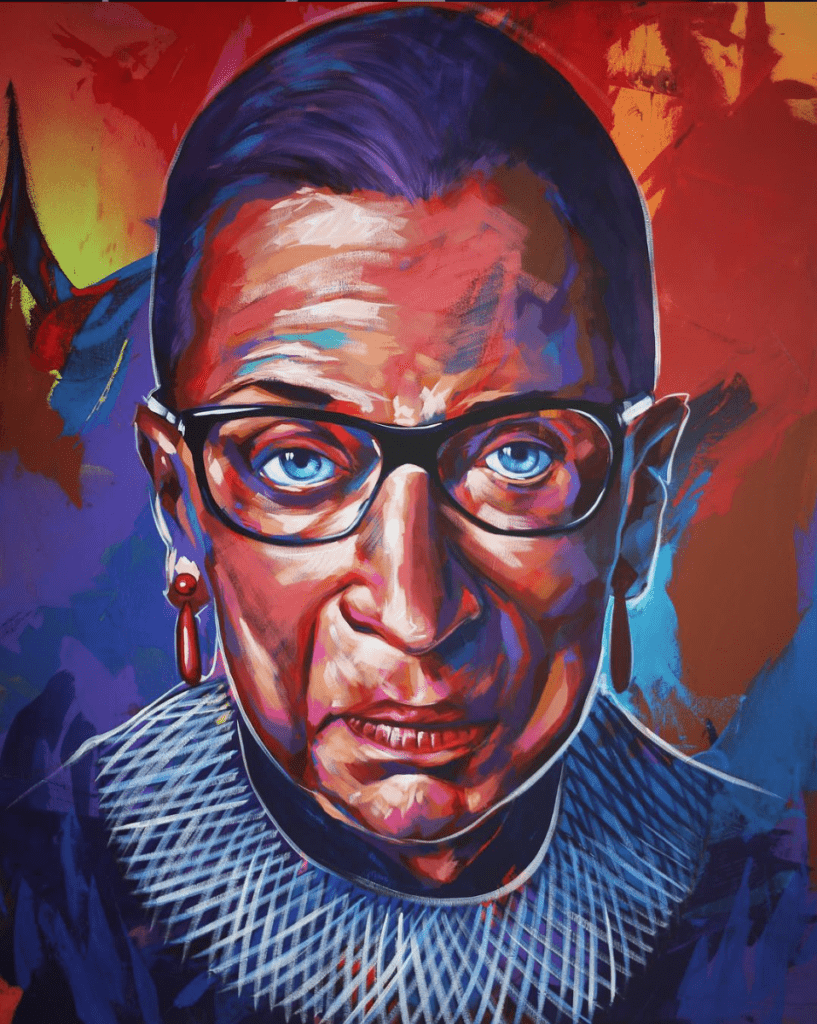 What were your most memorable childhood memories with creating artwork? Do you have any funny stories?
I don’t have any funny stories. I’d say the most memorable thing you know, that I can kind of even remember is really just creating drawings of Teenage Mutant Ninja Turtles. So that was like my favorite show as a kid and you know, get the video game and all that, dressed up as the turtles during Halloween. So I mean, one of my favorite times in my life was just being able to do that. So drawing them in school and actually selling them for like a dollar a drawing was something that I used to do.

What drives you to keep producing artwork?
What drives you to keep producing artwork? So for me it’s sort of I’d say the opportunity to explore some of these different ideas that I have. Mainly because it’s something where I wake up and I have this idea and I just want to sort of get it out of my head somehow. Or I have this new medium that I found out about and I want to try to figure out how I can use it different than anyone else or how does this medium even work? Or how do I sort of bring technology into my studio space and explore what can I do with it. So trying to push the boundaries when it comes to some mediums, materials and process, in color and really just exploring, and not having any boundaries. 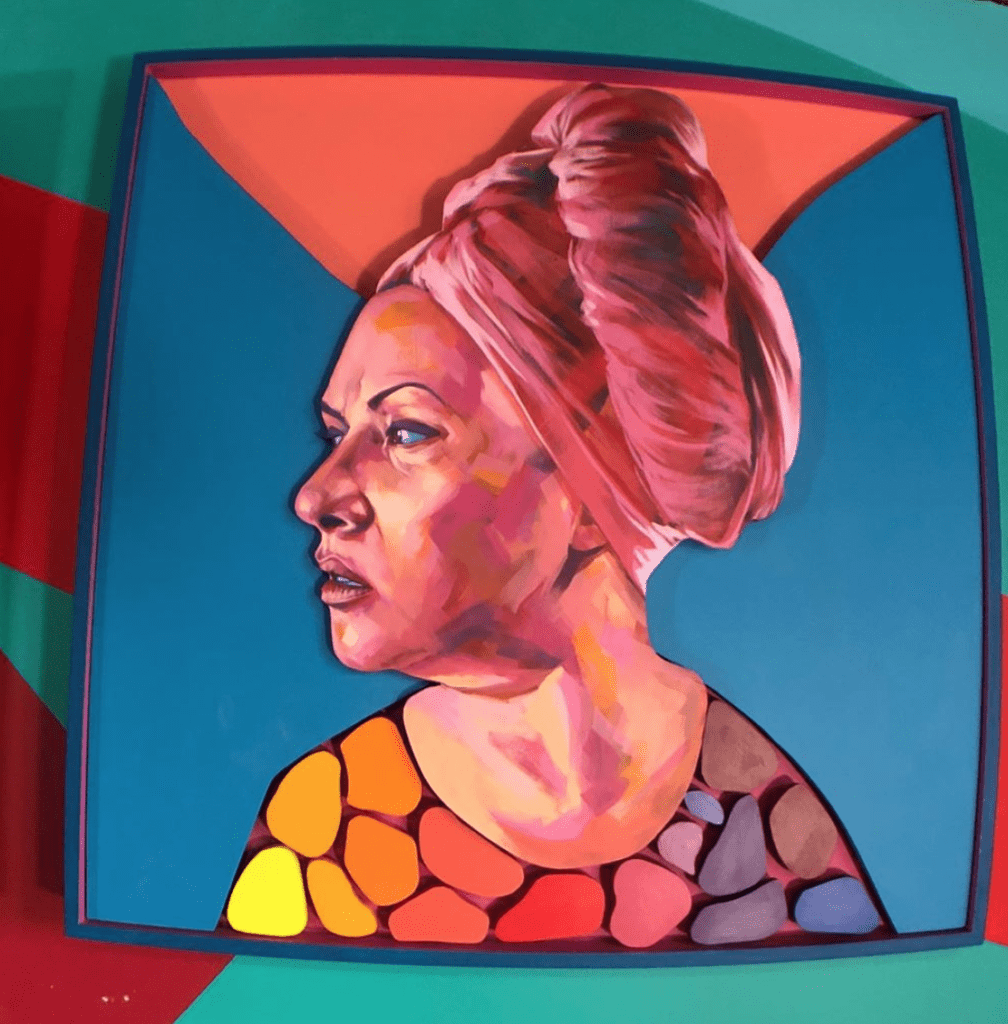 What advice would you give someone who is passionate about making art and getting their name out there?
I’d say there’s a bunch of advice. I would say that, whew, where to start. So first thing is really just try to do work that you love. Do work that isn’t sort of forced or isn’t sort of like you’re trying to follow a trend. So doing work that you love so that you know, when you’re up late at night you feel excited about doing the work that you do. And then as an artist trying to make a career, a lot of artists have to understand that not every artist peaks at the same time. So you know what, it may take years, it may take decades or it may take a couple of months for you to get your work out there. Especially nowadays, its not that there’s no gatekeepers but there’s too many gates to keep. So you can find sort of your niche or your path to however you want to be an artist. It’s just sort of that journey of finding it. So don’t worry about the timeframe when you’re thinking about trying to make it as an artist or trying to make it big because it shouldn’t be about making it big. It should be about “Are you happy creating the work?” Another piece of advice I would give artists is to learn how to get over rejection. A lot of times rejection is really just a numbers game. A lot of this stuff is a numbers game. Whenever you’re applying to a gallery or applying to studio phase or a residency or fellowship or even school, a lot of times it’s a numbers game or it’s all about timing. It’s like when you apply or when you sort of put your name in the hat and try to get an opportunity. So learning how to take rejection and say its not personal is really big. Other areas is sometimes more about the mental health side of stuff when it comes to doubting yourself or comparing yourself or even isolation. It’s like you really want to make sure you take care of yourself because in this creative world, you know, there’s a lot of alone time. And really just trying to focus on getting better. Sometimes you forget to take care of yourself, so really take care of yourself and try to make sure that you’re not only healthy physically but mentally as well. But yeah, I mean those are some of the best advice I would have to give. And you know, when it comes to exposure, really it’s sort of finding your own sort of lane when it comes to the art world. So, you know, you see artists using new platforms to get out there, so don’t limit yourself in terms of where to show your work or, you know, to certain, norms or expectations or what other artists have done. The whole idea of getting your work out there is all about ‘How do you be unique when you do that?’ So think of new ways of getting your work out there because, in reality, there’s no rules, even though, many, they say you don’t want to put your work here, here or here if we’re doing this, this and this. There’s no rules. If it works, it works for you. So try to be as unique as possible when it comes to that.

What’s next for you? Where do you see yourself in the next 3-5 years?
What’s next for me is my next show in November. I’m trying to do bigger shows that have bigger pieces and installations and more conceptual ideas that you can sort of really bite into, have a conversation with ’em. So that’s really where I am at right now.

In three to five years, I’d say doing more work out of state, out of Colorado. I do it now, but trying to do more stuff on a regular basis out of Colorado. So different shows, murals. Um, I’m writing a book that will be out, February of 2020. That’s about helping artists and, you know, once that book comes out, I’m doing more with that in terms of helping other artists. So for me, it’s sometimes you just don’t know exactly where you’re going to be in three to five years. So really it’s all about how, how do I make sure that I’m just always happy wherever I am.