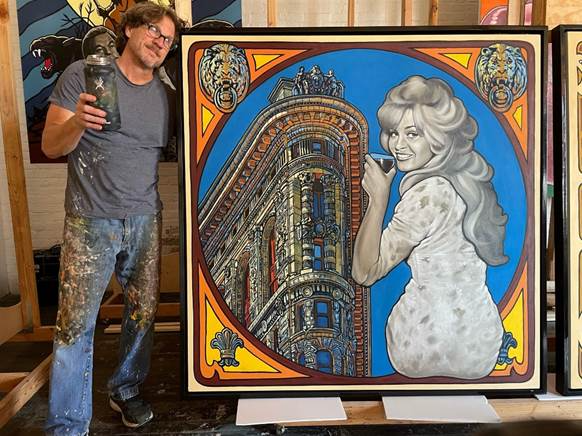 Artist William Nelson is known for his paintings that assemble unlikely pairs, or groups of figures – such as Hollywood film icons and nostalgic comic book environments – that would not normally be considered in the same frame.

Each entity within the painting reveals a partial narrative. The nature of a comic and the personas of the movie stars, presented in the ethos of the Hollywood studio system, act as blank canvases for us to project our personal experience, principles, and standards of behavior. There is a connection and a disconnect between these entities beyond technique; they exist within a single frame and are aware of each other’s existence yet there is an element of obliviousness. Something is happening and they can’t seem to take it in. Their dissociation, the separation of the two entities, compels comment.

In his newest series, Nelson ditches the comic book environments for iconic New York City locations to recreate the synopsis of notable movies. Each painting in the series poses a question; the viewer is invited to enter the intersection between the figures to interpret, and reinterpret, the subject of the painting, to explore the link between the figures. Sometimes what’s going on is intense, however, the playful expression of the paintings empowers further examination of challenging subjects. Some paintings from the series include:

·        Munich, inspired by the German silent film Pandora’s Box, Lulu (Louise Brooks) is a young woman with many “patrons.” She is so beautiful and alluring, no man nor woman can help but to fall madly, deeply, hopelessly in love with her… and despair. She stars in a musical production, prevails in a struggle for a gun, and escapes her manslaughter trial with the assistance of men under her spell and a fire alarm.

·        New Orleans, features Ann-Margaret from The Cincinnati Kid, where “The Kid” takes on “The Man” in a high stakes poker game in New Orleans, hoping to become “The Man” himself. The Kid is tempted by his best friend Shooter’s wife Melba (Ann-Margret), an unlikely Queen high straight flush makes an appearance as well as a penny pitch with a shoeshine boy.

Currently, Nelson’s works are on view at Cavalier Galleries with a show upcoming in the fall.