Prague is sometimes referred to as a fairy tale city come to life, and with that fact in mind it might suggest some bizarre things are popping up in hidden corners. The Czech Republic is located close to where the Brothers Grimm collected their crazy folk stories, and so the entire area has its roots deep in vibrant imagination. The Czech people are no strangers to mind boggling statues or unexpecting gems, but almost every one of Prague’s diamonds needs some context to be fully understood.

One little nook in the sprawling city of fable is centered around a rather interesting statue. “Piss” by David Černý is one of many pieces scattered by said artist throughout the city that is both interactive and absurd. It is fitting that the fountain-statue itself is located right near the Franz Kafka Museum, the father of absurdist literature that sends a message. Both Černý and Kafka were Prague natives, and both show a distaste for governing powers through their art. The Czech Republic has a rich and interwoven history, but it is marked by a lot of strife and turmoil. The little square in the Malá Strana district of Prague is an insightful peek into the workings of Kafka’s mind during the early 1900s, and into Černý’s in the modern era. Also, there’s a small gingerbread shop located there too, probably to counteract the bizarre workings of the two unique minds. 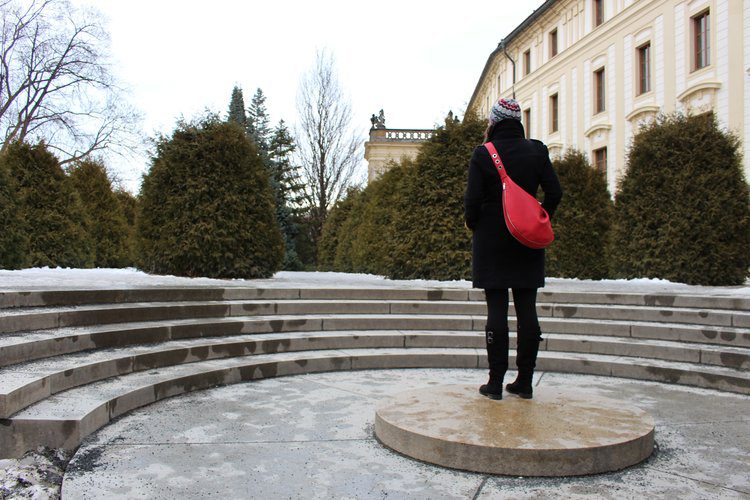 Prague Castle is a sprawling compound that sits proudly atop the city, but there are so many stories and little courtyards that it can be difficult to see it all in one go. If entering from the bridge tunnel where the guards keep a post, make an immediate right through the courtyard through a shorter tunnel. Doing this takes you out into a small courtyard where you’ll find a raised stone platform and a garden of trees. Our guide explained that these specific trees originated from Japan and were specifically brought to Prague Castle.

Now, you’re probably wondering why exactly this is of note. Well, if you stand centered at the edge of the platform as seen pictured above, you’ll be able to hear your own voice in your ears. The best way to describe it is that it sounds like you’re speaking into a microphone and the speakers are loud in your ears. Apparently, the way in which the trees are planted and the walls are situated causes your voice to travel in such a fashion that it bounces directly back into your head. The reason behind this was so that the prince could take time to practice his speeches, giving him a good idea of what he’d sound like while performing officially. It’s a really neat part of the castle, but it is super easy to look past.

The king of Christmas carol fame, King Wenceslas is a popular figure in Czech history. He once ruled from the city of Prague, and he is often cited as the “Good King”. He has a more formal statue right outside the Prague National Museum, but the more thought-provoking piece is found in the Lucerna Palace Gallery. Hanging from the ceiling, the king sits atop an upside down statue of a dead horse. This piece is also one of David Černý’s, who also created the aforementioned “Piss”. Like other pieces of Prague’s art collection, this piece has something to say. Wenceslas, the man whose legacy is based on his high approval rating, was infamously murdered by his brother. In some sense, the dead horse hanging upside down might represent the country itself, and what it became after Wenceslas was taken from them. The sculptures of David Černý are always up for debate, but going to the gallery and looking up at the hanging statue is a unique art experience.

Prague obviously has no lack of interesting pieces, and Černý plus many others have created countless other pieces, but the places I’ve mentioned here are just some that I’ve come across in my travels. Everyone will find their own little hidden corners of Prague, and each person has the chance to find some special pieces of art that can inspire some bizarre thoughts in their head. For that reason alone, the fairy tale city is worth visiting if you love art and applying your take to a controversial piece.

Social Distance: ​But Make It Fashion

Devils Tower Has The Internet Talking

International Students May Have To Leave The U.S. If Their Colleges Go Online