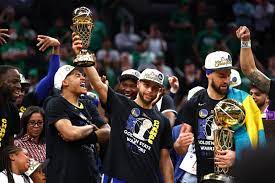 First Half of NBA Championships

It was win for the Golden State Warriors in the 2022 NBA Championships. Game 6 of the NBA Finals took place on Thursday night, a home game for their opponents, the Boston Celtics. At the end of Game 5, Golden State led the Finals 3-2. In this game Boston was hoping to make a comeback and push for a Game 7. Game 6 played in their favor as they ended the first quarter on top with 27 points, while the Warriors slightly trailed 5 points behind. By halftime, Boston’s luck had run out, giving Golden State a 15-point lead, the score now set at 54-39. Star players Stephen Curry, Jordan Poole, and Andrew Wiggins racked up a combined 21 points in the 2nd quarter putting them in the lead.

Second Half of NBA Championships

As the second half started, the game began to turn into a 3-pointer showdown. Both teams attempted 10 combined 3-pointers in three and a half minutes, causing some playful uproar in the crowd. The end of the 3rd quarter saw Boston striving for a comeback. Breaking down what was a 22-point lead into a 10-point lead. Center, Al Horford becoming a valuable asset to some nail-biting runs. As the 4th quarter came into play, the Celtics led with 76 points, the Warriors following with 66. Despite Boston’s efforts to keep that lead, Golden State managed a final push in the last quarter, taking over the board with a final score of 103-90 to win their seventh NBA Championship. Stephen Curry, having been the backbone to the Warriors’ last three NBA championships, was finally able to claim the MVP title.

In the post-game, Celtics Coach Ime Udoka seemingly blamed his team’s offense for the loss. Udoka stated they had a lack of consistency but left on a high note, saying this series set the foundation and the team’s future is bright.

Warriors Coach, Steve Kerr, by contrast, praised his spectacular defense. Specifically calling out his Power Forward Draymond Green as its forefront. Kerr later emphasized his MVP player, Curry, on his crowning achievement, yet recognized the full team effort it took to win.

These teams put forth an amazing effort throughout the playoffs to win their conferences and make it to this series. It was a great game and an amazing shot at victory.