It takes years and years for athletes to master their sport, but that doesn’t mean they have to be confined to being a one trick pony. Throughout the years athletes have ventured into trying other sports whether it be for charity, television, or just to switch things up. I am going to review some of the 4 most interesting sport career switches in history. 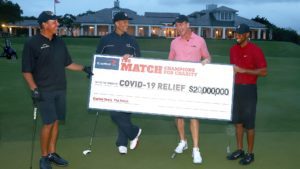 Peyton Manning and Tom Brady are known for being some of the best football players out there, but they reminded us that even they aren’t perfect. In a match up with esteemed golfers Tiger Woods and Phil Mickelson to raise money for COVID-19 relief organizations, the football players tried their best but ultimately had to depend on the seasoned veterans. Manning started off the game rough but managed to shush the twitter trolls when he holed a wedge shot on the seventh hole…but then he split his pants on national TV. Similarly, Brady wasn’t swinging too hot at the start, but he too seemed to improve as the game went on. In the end the Manning-Woods team up were able to edge out Brady-Mickelson in a close game.

I rate this attempt a 8.5/10. Was it perfect? Definitely not, but that’s what made the whole thing so much fun, and suprisingly Peyton and Manning had some good moments out there. Plus, the whole game came together for a good cause, and who doesn’t love a great charity event? 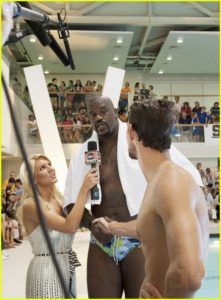 An oldie, but a goodie. In 2009, Shaq started his show ‘Shaq vs.’, a reality TV show where, you guessed it, Shaq pit himself against professional insert-activity-here. There are countless episodes where he goes against other Olympic and professional athletes. I chose this one because swimming is an unforgiving sport in the sense that it takes years of training to get remotely close to the level of elite caliber swimmers. Furthermore, Shaq’s basketball physique makes him great in most sports, but in swimming, he had a heck of a time getting through the water. In the most fun race of the three shown, Shaq teamed up with Olympic medalists Rebecca Soni, Ariana Kukors, and Dana Vollmer to 4v1 Michael Phelps. The trio of ladies got Shaq almost a full pool length of a lead, but Phelps still rocketed to the win in the last 15 yards of the swim.

I rate this event a 7/10. This show is super goofy and I definitely laughed out loud watching this. It’s a fun way to bring more attention to athletes who usually just get the limelight during the Olympics. 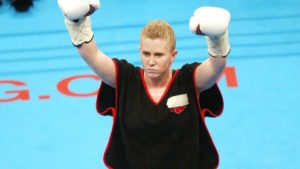 Tonya Harding was once a great figure skater, being the first woman to complete a triple Axel in competition. However, the world mostly knows her for her role in the attack of figure skating rival Nancy Kerrigan before the 1994 Winter Olympics. Flash forward to the year 2002 where Harding began her career as a boxer. She had mediocre results, coming out of her career with 3 wins and 3 losses. In her last two fights she lost to Melissa Yanas and Amy Johnson and then promptly retired due to asthma.

I rate this sports switch a 5/10. Like the results show, it was a pretty tame career, and it only lasted about 2 years. Her boxing career also did not earn her any points with the public as she reportedly was booed by the crowd in her last fight. 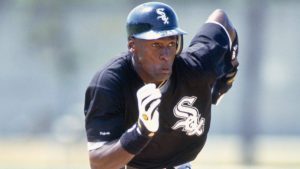 Everyone knows who Michael Jordan is, even if you’re not a huge basketball fan. He was the face of the sport even past his retirement in 2003. Following his temporary basketball retirement in 1993, Jordan picked up Minor League Baseball for the Chicago White Sox in tribute to his late father who always wanted him to play in the Major Leagues. By the end of his short stint he had a .202 batting average, three home runs, 51 runs batted in, 30 stolen bases, and 11 errors. At the time, people regarded his career as a very average run, however within the past five years, many have began reevaluating his career. Many cite it as nothing short of impressive considering he joined at the age of 31. Furthermore, people have said that his career was too short lived and he carried a lot of potential even though he joined late in the game.

I rate Jordan’s baseball career a 7/10. At the time it was a shock, but his career didn’t bring anything new to the sport of baseball. However, the recent look back at his career shows that he certainly had talent, and in a way his baseball career has left a legacy of its own.

These athletes may not have had super successful careers in different sports but they definitely shook up the athletic community. At the very least it reminds us that at the end of the day sports are done for fun and for our enjoyment. It’s not a bad thing to try new things every once in a while, even if you are big names like the ones in this list.