FKA Twigs surprised fans with a short film, “We are the womxn.” The film is a celebration of pole dancing and femme sex workers of color.

In the film, Twigs is joined by spiritual leader Queen Afua to lead a sacred moon dance. The film is personified by this quote from Queen Afua: “Whatever movement you make is perfect because it’s your language.”

Conjointly, Twigs launched a GoFundMe for sex workers of color affected by the pandemic in the UK through these organizations, SWARM Collective, Lysistrata, and the East London Strippers Collective.

On Instagram, Twigs explained that she began pole dancing while working as a hostess in a gentleman’s club. She continues:

“My lived experience as a very young woman in these environments has not only informed the strong and formidable woman that i am today, but also a lot of my work as a music and visual artist – sometimes even subconsciously. 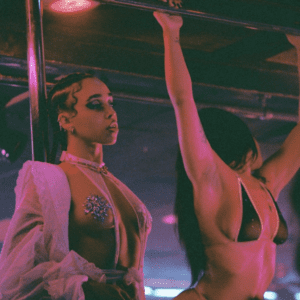 I feel like now is the time for me to step forward, pay respect, and shine a light on the challenges facing sex workers, especially during these uncertain times. Sex workers I know and have met have discipline, craft, talent and work ethic — not only do they deserve better long-term, but their income has been wiped out by the lockdown and many are invisible to the financial aid available to others.”

Since sex workers are still not allowed to work, Twigs is handing over her Instagram to  SWARM Collective, Lysistrata, and the East London Strippers Collective to supplement income for the UK sex workers. You can donate to FKA Twigs sex worker mutual aid fund below:

Art of the In-Between

Up and Coming Actor Spotlight: Kiera Allen Hollywood’s First Lead Actress in a Wheelchair Since 1948