Interview with Destiny Littleton, “One Of One” 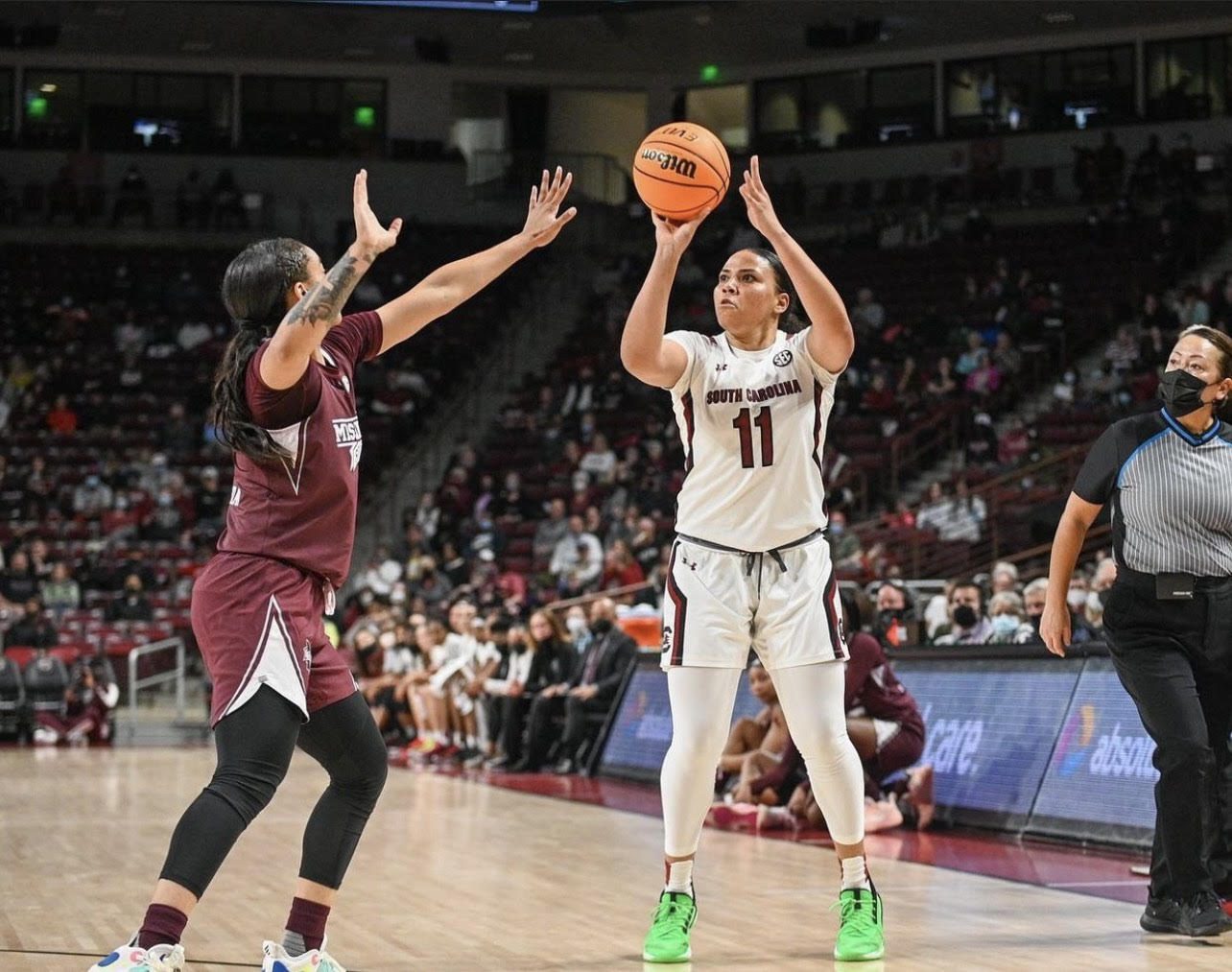 Interview with Destiny Littleton, “One Of One”

When did you first get introduced to basketball?

“I was sort of a late bloomer. I just started playing in like fifth grade, the start of sixth grade. Before that I played football.”

Do you have a pregame ritual that you do before every game?

“I’m not really big on rituals too much. I just keep it simple, I always have had to take a shower before a big game, I wear my chain, my basketball chain that my dad got me like seven years ago. I always keep that on until the last possible second. Then I just kind of listen to E-40 before games just to get focused and you know, do my thing. Then I take some special energy juice before the start of the games.”

How do you stay motivated after a loss?

“Just understanding that you know, the things that we did in the game that didn’t work out or you, even the things that we didn’t do in the game that worked out, just evaluating them and seeing what we have to do better. We lost one game this season and it was a huge game to lose, we felt like we were the better team and we felt like we put in the work to win that game and we didn’t win.“

“We didn’t execute the game plan and when we don’t do those things it’s kind of a reflection on me to have to go back and look and see what needs to be done. Obviously, after a loss, we’re all down and just kind of frustrated but it’s the next days after the loss that matters. Just believing in yourself and playing with a chip on your shoulder and understanding that anyone can beat you on any given night.”

Is there a particular significance to your jersey number? Why #11?

“There is. So actually in high school I wore number four. I love Kobe, and I’ve always wanted to be number 24. However, the coach at my high school, which is my dad, coached a player who was with the WNBA and had all these accolades. And so she was number 24 and he basically told me like hey you need to earn that right to wear 24. Finally my senior year he said I earned it, so I was 24 my senior year. Then when I went to Texas I couldn’t wear 24 because it was already taken, so I went back to my original number 4. When I transferred to South Carolina 24 was taken, and I listened to an E-40 song and one of one was one of his lyrics. And so I was just like hey I’m 11 I’m one of one.”

What have you enjoyed most about this current season so far?

“Just the team that we have. I mean, we have so many different pieces and personalities. Every day is different, you never know what you’re going to get. Playing with these girls is fun every day and you know they have your backs on and off the court. This season is really special for us. I mean, we fell short last season in the Final Four, and then the year before that, we didn’t even get to the tournament. I feel like we’re all antsy to go to the National Championship and win because we deserve it. This year is definitely special for us and I just can’t wait to see it through.”

Where do you get your style and fashion sense from?

“Nowhere really, I’m not a big fashion person right now. But, I do love to dress up and look nice, it’s just hard in college. Honestly, I don’t know how some of my teammates do it. It’s tiring to try and figure out the outfit you’re going to wear and what goes with what. But when I do get ready maybe I’ll see inspiration off Pinterest or Instagram. I’ll like a certain style and kind of pick out what I have in my closet and put it together. For the most part though, I’m pretty much just an athletic style. I’ll wear athletic shorts, leggings, sweatpants, those types of things. I just like the running style of clothes and just always feeling comfortable.“

“And, I love shoes, I have way more shoes than I do clothes it’s a real problem. I’ve always been into shoes and Nikes in particular, but I’m starting to venture out into the other brands as far as off-the-court wear. Definitely when I get out of college, I think I’m going to be more into fashion and taking more time with what I pick out and putting something together that fits me.”

Who is someone you consider to be a role model for you?

“I would say a male role model on the basketball side, it was Kobe, I mean, I played for him. I grew up watching the Lakers and Celtics series. Just seeing him be the dominant force that he is and just the mindset that he had. He just kind of motivated me to play the way I do. Even though he is not here anymore, he was changing the women’s game by his presence. He had NBA players back him, and back the WNBA. He was coaching his girls and he was quickly changing the landscape for women in sports. Just to see him go was like, now this is the time to reflect on the impact he had and to strive to make just half the impact he made on all of us. So that’s my role model basketball-wise.”

“I want to be a doctor once the basketball part of me dies down. I actually met Dr. Guy when I got to South Carolina, he is our team orthopedic surgeon. He just inspires me, we have real talks, we’ve talked about med school, we’ve talked about his journey and my journey. He’s just always there when I need him. I just look up to him, he’s a really good person. His story isn’t just the typical I got good grades and I got into med school. He works for where he’s at today and that kind of resonates with me.”

“My female role model is definitely Maya Moore. I’ve always loved her growing up and not just for the things she does on the basketball court. We all know she’s super super talented in the way she plays, she plays with heart. But, it’s also her ability to step back from the game and do something that’s bigger than herself. To get her husband out of jail and fight for rights that people don’t have access to. She allowed a lot of people to get the lawyers they needed and to see her do that, I can’t even put it into words.“

“At first when I found out she wasn’t playing I was like man, and then the bigger reason came out, and it all made sense. It all makes sense about who she is. I actually got to meet her when I was a senior in high school at the Jordan Brand Classic. Just seeing her mindset, how she only follows so many people on social media because she cares about what she feeds herself on a daily basis. I will definitely strive to be balanced like her one day. “

What has basketball taught you that carries over into other areas of your life?

“Patience. I use basketball as my stepping ground even when things aren’t going right in my regular life. I go to basketball, it’s always there for and it’s just my outlet for everything in life. When I had my injury I didn’t have basketball anymore. I was kind of lost for a second and it just taught me patience. Just to be patient and find yourself and to use this time and find what you love other than basketball.“

“You need to have something else to fall back on. My patience has grown. I’m not saying my patience is low or that I have a lack of patience but it’s just taught me patience in life and how something you love can be taken away so fast. Just being able to take a deep breath and realize I’m more than this and more than running up and down the court. It does wonders for me.”

What advice would you provide to other women out there who want to play basketball?

“Basketball is hard, but at the end of the day, if you have the will and you have the heart for it, anyone can be a star. Anyone can go pro, anyone can make their parents and family proud. Whenever you do go through a rough patch, just keep going because nobody is perfect. Even on the good days, you’re going to have faults, you’re going to have mistakes. The number one thing when it comes to basketball is you have to put in the time and work to be great, to be where you want to get. That’s honestly life in general, whatever career path you want to take if you don’t put in the work it’s not going to work out for you.”

“I love telling the younger generation, the middle schoolers, the early high schoolers, that it’s different with them. When I was growing up all I knew was work, getting to the gym, working on my craft, and my weaknesses. In this day and age, social media is so prominent. It’s all about highlight reels and who did I crossover this game, and balancing those two is going to be crucial for this next generation of basketball. Just keep in mind why you’re playing, why basketball is so important. And if your why is not strong enough, then it’s going to be easy for someone to just take basketball away.”

What is next for you after graduation?

“I’m going to pursue my professional career. Whether that be the WNBA or overseas, or both. Then, when I’m finally satisfied with my basketball career and I’m okay with retiring then I’ll do that. I will definitely pursue my career in the medical field. I have a lot of stuff to look forward to, but just taking it day by day right now I was I’m focused on.”