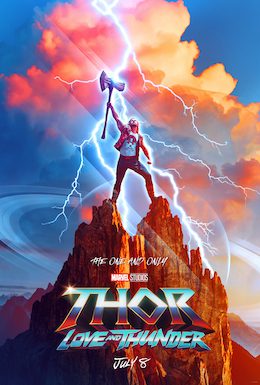 Marvel Studios announced the release date for “Thor: Love and Thunder” on Monday morning. Along with the release date came a brand new movie graphic and teaser, announcing the premiere for July 8. Here is the teaser.

What’s in the Teaser

The teaser starts off showing Thor, played by Chris Hemsworth, seeming to be on a mission of self-discovery. The character is shown as peaceful at the beginning of the teaser, but things quickly pick up as characters from “Guardians of the Galaxy” make an appearance. Some of the most notable pieces of the trailer include Thor walking away from Stormbreaker. This is symbolic because this is the weapon he used to kill Thanos. He seems to have given up being a superhero and wants to live a more peaceful life.

In a few brief shots of the teaser, viewers can see New Asgard. From the frames, it seems New Asgard has become some sort of tourist attraction with King Valkyrie, played by Tessa Thompson at the helm.

In a few other shots, viewers can see Olympus. The Marvel Cinematic Universe seems to be exploring new territory and Zeus, played by Russell Crowe, is at the forefront of it all.

The Guardians of the Galaxy make an appearance, bringing more humor into the upcoming film. Jane Foster, played by Natalie Portman, also makes an appearance, but she’s not her typical self. In the teaser, she seems to be the new God of Thunder, which will likely cause some problems in the MCU. In the one-shot, she is holding Mjolnir, which still has the signs of destruction from previous films.

Overall, this teaser had good vibes. Future teasers of “Thor: Love and Thunder” will likely show more of the villain side of the film. This will be fairly exciting to see in theaters as Thor’s films have done well before.