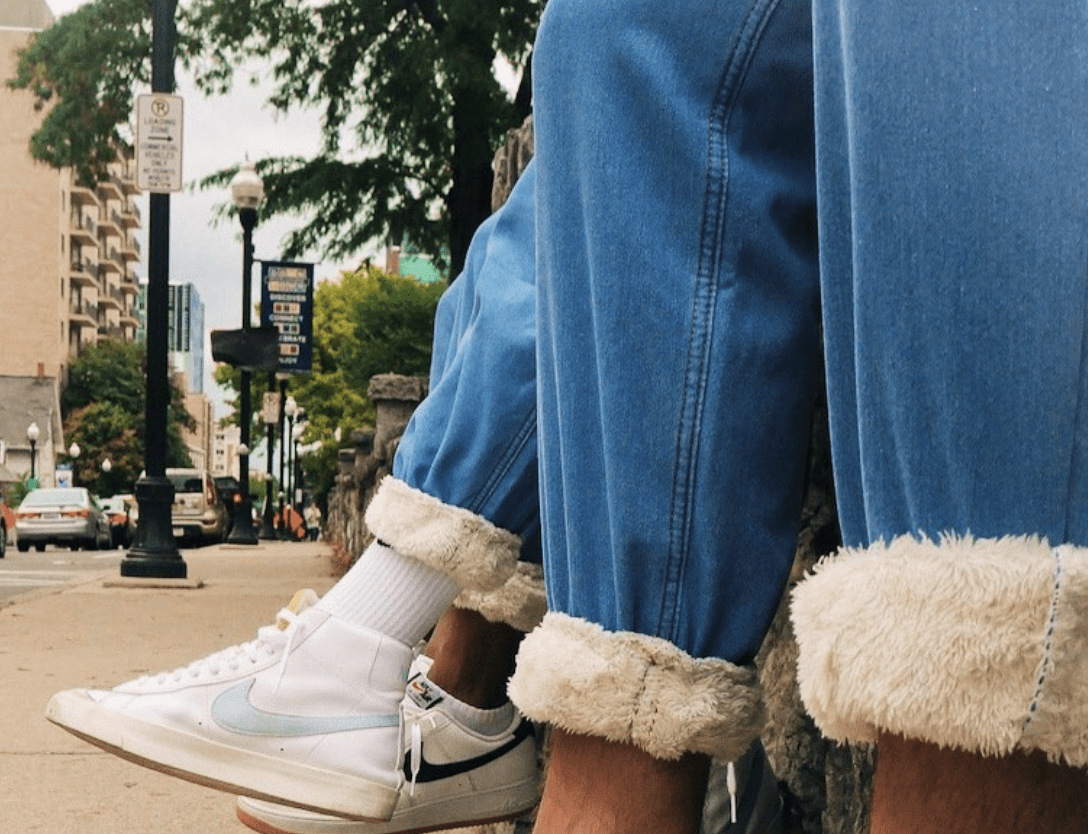 Trends in fashion come and go, but comfort stays consistent, especially with brands that specialize in outdoor wear. For JERPA, they focus on staying with the trends, providing warmth and being a company that focuses on communities of all climates.

In under 16 months, JERPA has generated over $80,000 in revenue. If that wasn’t impressive enough, the founder is only a senior in college. Austin Thomas is a student at the Pennsylvania State University studying Supply Chain Management at the Smeal School of Business. Being from Bucks County, Pa., Thomas is no stranger to the cold. However, it was not until he was at Penn State when an idea struck him. 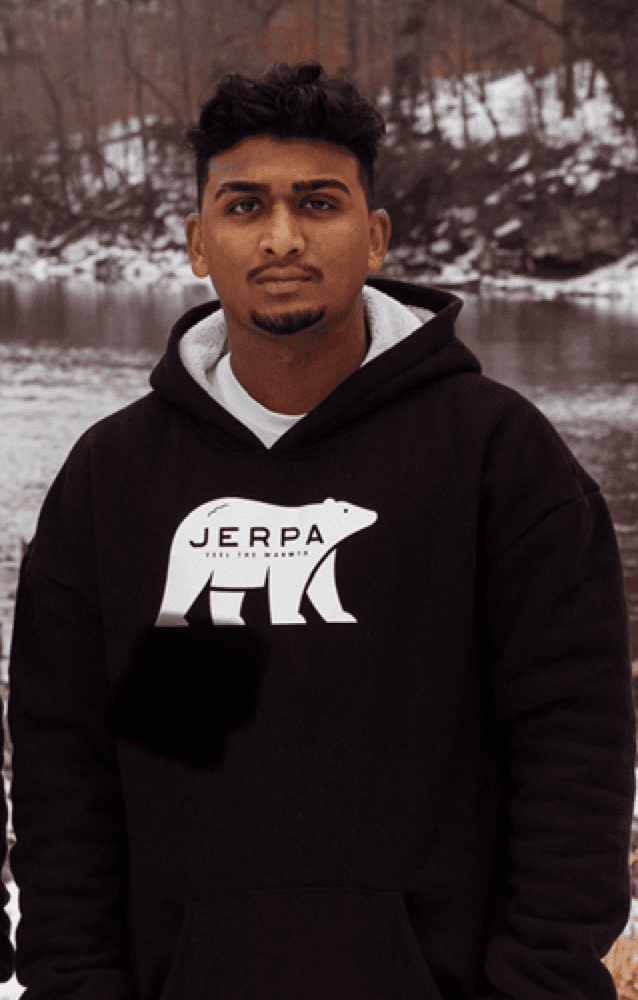 “Being at Penn State, we would go to tailgates and football tailgates wearing like thermal pieces under our jeans and clothes,” said Thomas. “It gets super cold.” The idea of incorporating Sherpa fleece into jeans to keep warm was something Thomas had never seen before, so he thought, why not make it.

At first, it was just Thomas and some trial-and-error. Working with a thick material like Sherpa fleece, he wanted to make sure the jeans kept you warm on the outside but did not cause a sweat indoors. Once he got the jeans just right, Thomas began working on the business and marketing plan. It was then he reached out for some help to get his company going.

“Capital was a big restraint, so I came up with a commission-based thing, like an ambassador program with friends,” said Thomas. With an ambassador program, Thomas uses fellow students to promote his clothing line around Penn State’s campus. His friend Brad Kraut, a sophomore at Penn State, helps Thomas out with shipping and running the day-to-day operations of JERPA.

Gaining more and more support from his collegiate community, Thomas began to expand the company. The company started out with only Sherpa-lined jeans but now has branched into masks, sweatshirts and more.

The Meaning Behind the Polar Bear

JERPA is similar to other brands like North Face, where they are heavily focused on keeping people warm during the colder months. However, JERPA is striving to be more than a seasonal clothing line with future transitions from a winter brand into a year-round company. 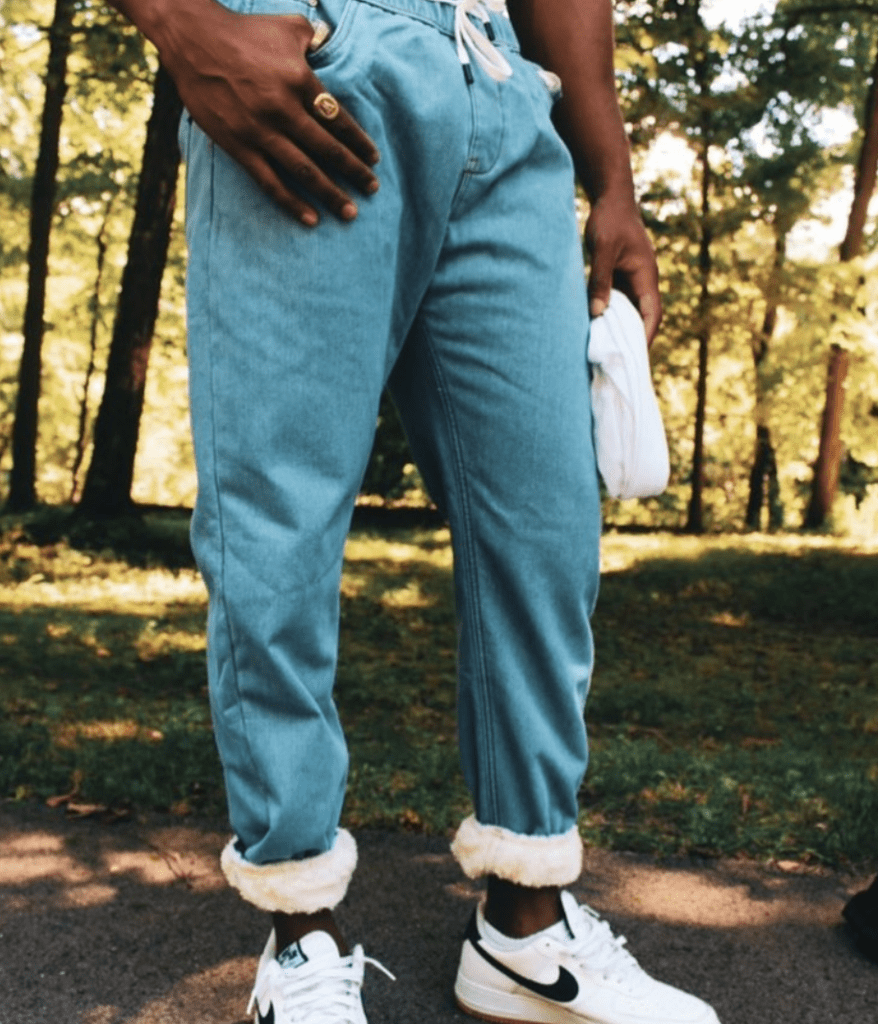 The name JERPA follows their first and signature product, Sherpa-lined jeans. The jeans are thinly lined with Sherpa fleece, making these jeans warm enough to wear outside, yet cool enough to wear inside.

With their mission, JERPA’s motto is “Feel The Warmth,” which incorporates their goal of making trendy, affordable pieces that are lined with Sherpa to ensure heat. To go along with their mission statement, Thomas wanted a logo that reflects the aesthetic of winter. JERPA’s logo is a polar bear, resembling the kind of “bear hug that the clothes provide,” said Thomas. “With all of our products being Sherpa, a cozy animal like the polar bear really signified all of those things.” 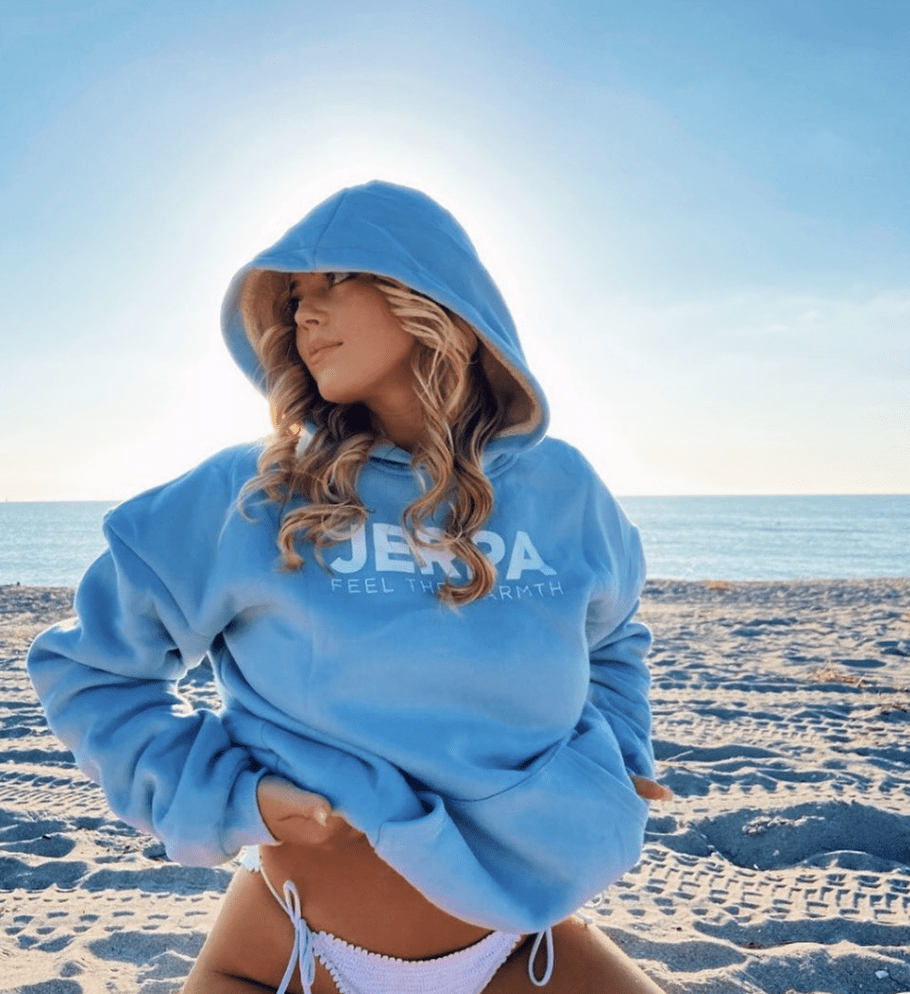 To complement the polar bear, JERPA’s clothes feature cooler and “wintery” colors to resemble the crisp weather of State College. “The blue color comes from the wintery, snowy, icy, blue vibe,” said Thomas. They do carry other colors like black, tan and even did a pink beanie for Breast Cancer Awareness.

While the appearance of JERPA reflects a cool and simple look, the inside is what makes JERPA’s clothes stand out from other outdoor brands. Their jeans, hoodies and cardigans are lined with Sherpa fleece to keep you warm from the inside out. Their hoodies feature a Sherpa-lined front pocket, acting as a hand-warmer for those who need it. JERPA is constantly evolving and innovating the way they combine fashion with warmth.

Penn State is known for its community-based alumni and students. Penn State pride is very much real and prominent on and off-campus. With JERPA, Thomas focuses on the community aspect of Penn State and incorporates those ideas into his brand. “So many people’s friends have it [JERPA] and now it is the cool, trendy thing to have rather than a question on what it is,” said Thomas. “Penn State students like knowing they are supporting a student-run business.” 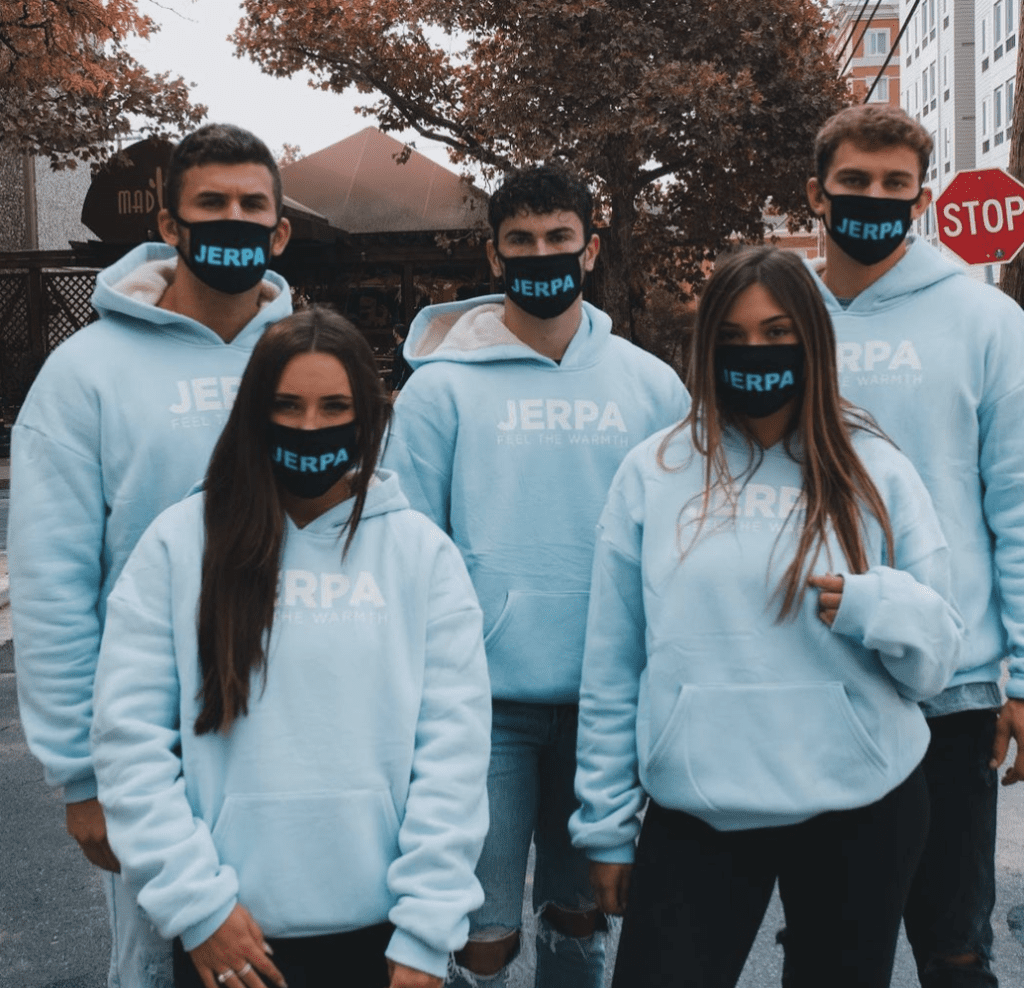 While JERPA began at Penn State, it has since reached out past the 40,000 students in State College, Pa. New York Giants Running Back Saquon Barkley, Dance Moms star Kendall Vertes and other established celebrities have promoted JERPA on their social media. Having people with a large following “repping a smaller brand has caused a wave effect on other people,” according to Thomas.  As of right now, JERPA has over 70 campus ambassadors and is present at over 20 different schools. 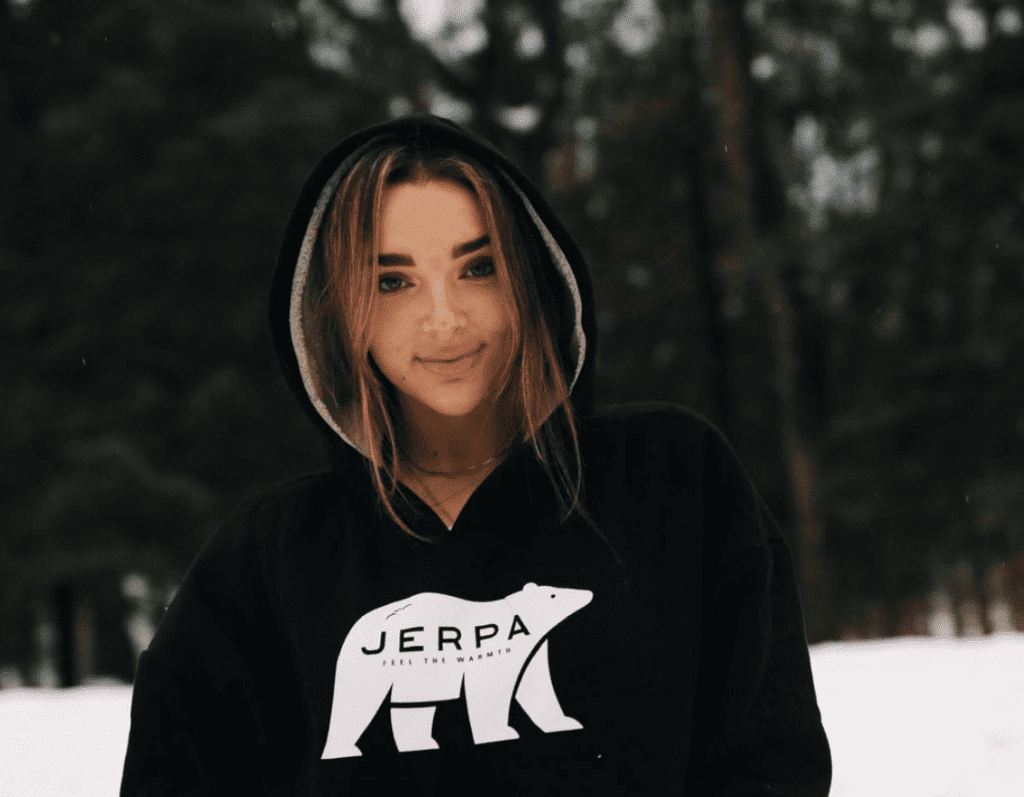 Thomas is not slowing down in terms of the kind of product he is working on. JERPA is planning on releasing cropped hoodies for the spring, Sherpa-lined joggers, reversible vests and more. JERPA wants to become more than a winter company, they want to become a one-stop-shop for warm yet fashion-forward clothes. While the near future is focused on new and innovative launches, Thomas has dreams for bigger collaborations.

“Thus far we have not done any collabs yet I would say a collaboration with North Face would be fitting,” said Thomas. “That brand is one of our role model companies and when it comes to releases like back-to-school, they are truly year-round.”

Along with North Face, Thomas equates his business model, of limited-edition drops, to Supreme. He would love to see his clothing brand mesh with other creatives to make high-fashion cozy.

JERPA is constantly growing. Thomas went from using his entire apartment for JERPA operations and sleeping on his couch to purchasing a storage unit to build his business. While Thomas focuses on JERPA and finishing his degree, fashion innovators like Thomas are ones to watch out for in the coming years. It surely won’t be long until JERPA is not just a Penn State secret.

JERPA currently sells domestically in America and you can browse their items on their website.