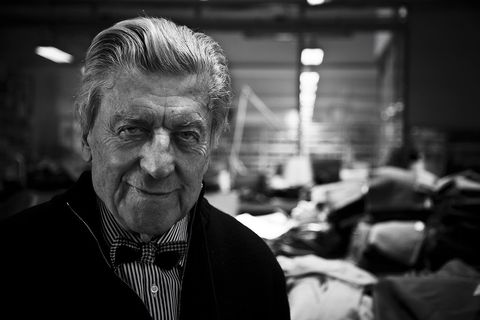 Italian fashion designer Nino Cerruti has died. A spokeswoman for Lanificio Fratelli Cerruti has said that his death follows complications with a surgery. He was 91.

Cerruti died at the Vercelli hospital in Piedmont. He was admitted for a hip surgery.

Nino Cerruti was born on September 25, 1930. First, he dreamed of becoming a journalist. After his father’s death in 1950, he left school and took over the family textile factory business in Biella, Italy.

Then, in 1957, Cerruti launched his first menswear company. Hitman was dedicated to elegance and a goal to become a part of the men’s ready-to-wear fashion sector.

“He was the first to understand the importance of creativity in menswear and to give space to a young designer of immense talent like Giorgio Armani, changing the very criteria of how to dress,” Carlo Capasa, president of Italy’s fashion chamber, told ABC News. “He was one of the first to have a strong international presence, representing to the world that unique combination of creativity and quality that came to characterize and still characterizes Italian fashion.”

As Capasa said, Cerruti gave Armani his break into the fashion industry. Armani remembers him as a creative with “an acute eye, a true curiosity, and the ability to dare.”

In his statement, Armani remembers their contact throughout the years. “I have always considered him one of the people who has had a real and positive influence on my life. From him, I learned not only the taste for sartorial softness, but also the importance of a well-rounded vision, as a designer and as an entrepreneur.”

Following that, Cerruti opened a boutique in Place de la Madeleine in Paris. The fashion house later grew to include fragrance and luxury lines. Additionally, he designed for films including Basic Instinct and Pretty Woman. Later on, he would become the official designer for the Ferrari Formula 1 team.

In the 1970s, Cerruti invented the deconstructed jacket — designed without an inner lining. He questioned the fashion norms by putting men and women on his runways wearing the same clothes.

Gilberto Pichetto, Italian Minister of Economic Development remembers him “with affection and esteem, for his institutions, competence and foresight with which he made Italian fashion great, exporting our made in Italy to the world.”

News of his death comes during Milan’s menswear previews.