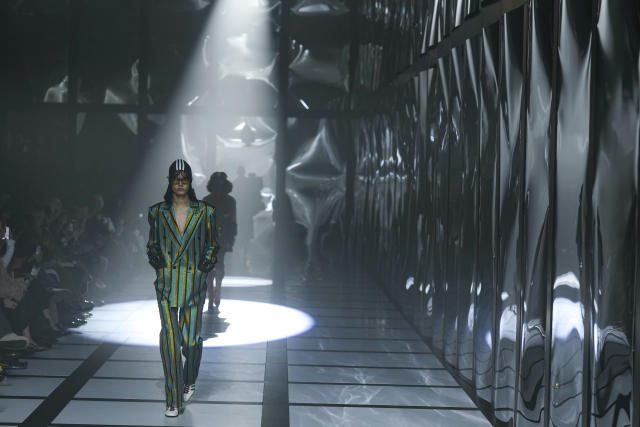 MILAN – It started in Michele’s press notes — a connection between mirrors and fashion. The Gucci Fall 2022 Ready-to-Wear collection is here and it’s exquisite.

“Clothes are capable of reflecting our image in an expanded and transfigures dimension…wearing them means to cross a transformative threshold where become something else.” The collection mixed sex and gender-fluid suits. “Women are really interested in men’s suits,” Michele said. The tailoring was the celebration of the show. The same silhouette appeared over and over again. It put gender fluidity and reminded us of our definitions of masculine and feminine.

“I thought it would be interesting to have a men’s collection during the women’s week, because we are so open to dialogue. I had prepared a menswear collection and I wanted to give a specific masculine image; my masculine world is very broad, I wanted to come back to this, to tell about this world,” Michele said.

Michele started suiting at the time of his anniversary show last year. He took what Tom Ford had done and made it boxy and genderless. “The line is so straight and neat on a men’s suit. With the neatness, the rigor of menswear,” he decided, that it would be styled and merchandised in that manner.

We received academic looks with tweed, double-breasted blazers in array of colors, velvet and fur lapels, boxy blazers, subtle Gucci monogram prints and knit berets. The collection was bright in chiffon, fur, corduroy, draped over color-blocking pieces such as single-breasted blazers in color-clashing ensembles. “You don’t need much to adapt them to masculine or feminine,” he said.

And we got a collaboration, an announcement. “I often thought about Adidas in my work, that was a hidden desire. I used pop symbols, I mixed things, I developed hybrids; three stripes for Adidas and for Gucci.” While the details of the collection are not yet known, we we’ve gotten a sneak peak: pieces that feature Gucci’s three strips and the Adidas logo on scarves and printed on pants.