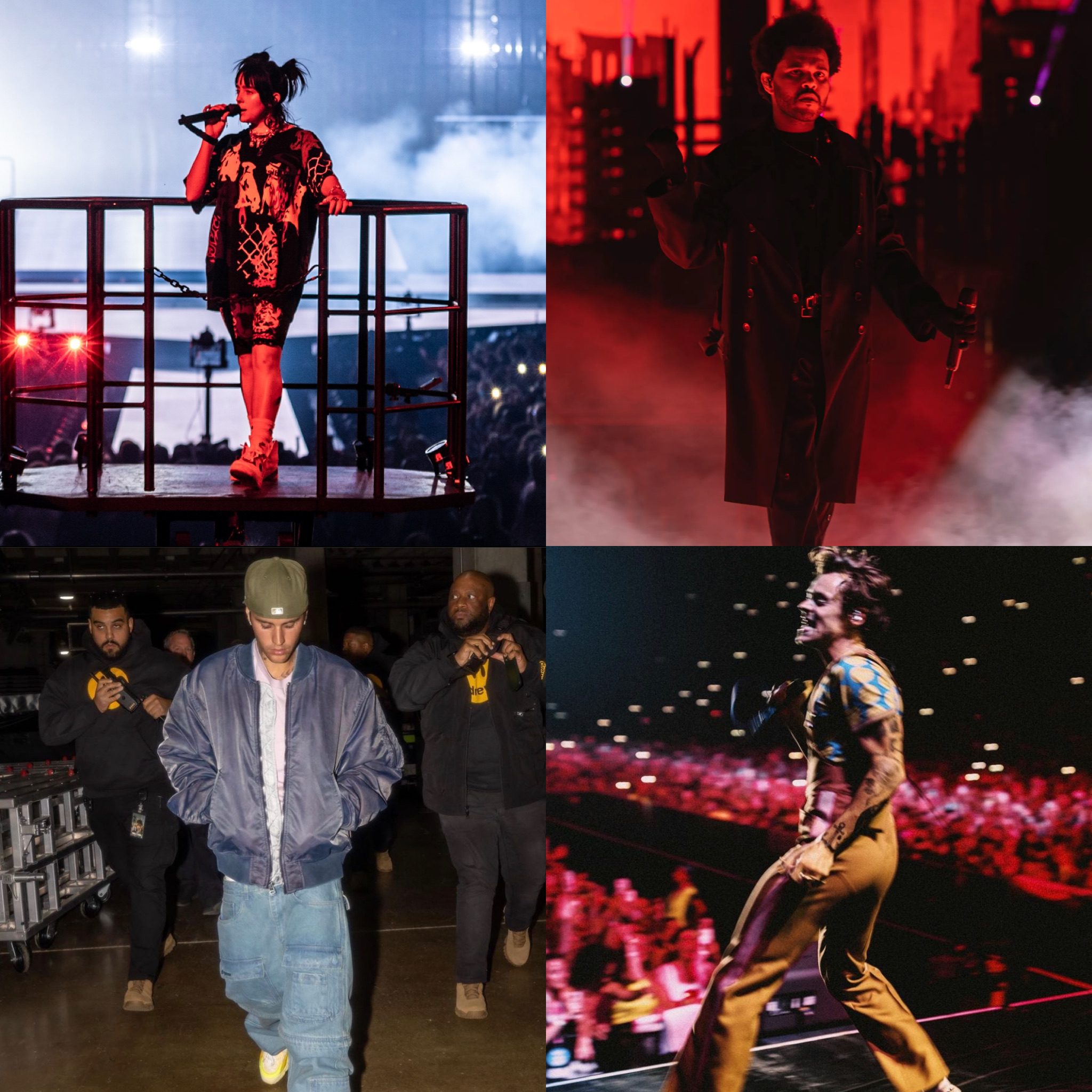 Images via Moment Factory, USA Today, Justin Bieber on Instagram, Harry Styles on Instagram. Musicians worldwide halted their concert tour plans for almost two years due to the coronavirus pandemic. However, with restrictions loosening, musicians are eagerly organizing their tours for their fans this summer. Highly anticipated tours such as The Justice Tour and The After Hours Till Dawn Tour are in full swing. In addition, musicians are sporting some of their best outfits onstage for their fans to celebrate their reunion. Here are the best dressed musicians on tour right now and some of their outfits.

The Weeknd – After Hours Till Dawn Tour

Abel “The Weeknd” Tesfaye started his tour in early July following the postponement of his After Hours Tour last year. This tour is comprised of a mix of songs from After Hours and his latest album Dawn FM. I personally attended the New York concert July 16th, and it was one of the best nights of my life. Not only was Tesfaye’s performance incredible, but the spooky skyline and moon set pairs perfectly with his melodic tunes.

Furthermore, Tesfaye chose to wear a custom black Yohji Yamamoto outfit that fits the concert’s moody theme. It is surprising and refreshing to see someone like The Weeknd wearing pieces from a designer who rarely does costume design anymore. Tesfaye’s black outfit consists of a double-breasted, fully-lined coat, trim slacks, a buckle vest, and an under shirt. It is simple yet bold with its structuring. Overall, Tesfaye’s dark and classic outfit completes the After Hours Till Dawn experience.

Justin Bieber began The Justice World Tour in February of this year. He was planning on going on tour for his previous album Changes that was released in early 2020, but he was forced to postpone it. Similar to The Weeknd’s situation, Bieber released Justice in early of 2021 which prompted him to use songs from both Justice and Changes in his concert. His set is full of vibrant neon colors and exudes light, happy vibes. In addition, all of his outfits compliment the energy of Bieber’s music and set. In contrast to The Weeknd’s single outfit, Bieber makes frequent outfit changes and wears different looks at every concert.

Although each outfit is different, Bieber sports consistent style trends in all of his outfits. For example, Bieber is very into the oversized trend and wears at least one oversized thing in each outfit. Furthermore, he usually opts for oversized pants with a fitted top or no shirt to pair with his pants. He takes risks and succeeds, such as a wearing a neon green denim jacket and matching oversized jeans with patchwork bees. Recently, he sported an adorable crochet bucket hat that added a nice contrast with his edgy tattoos, Balenciaga socks, and Nike Airs.

In addition, I also attended this concert in New York on June 3rd. He looked incredible in a chunky pearl necklace and dark green oversized leather pants. It is no surprise that Bieber takes his fashion seriously because he understands trends in fashion from his own brand Drew. Overall, Bieber is slaying the game with his innovative fashion and masterful music.

Love on Tour commenced in September of last year and will continue through March of 2023. Harry Styles is performing his album Fine Line and his newest album, Harry’s House. He was going to begins Love On Tour tour earlier in 2020 but postponed it due to the ongoing pandemic. Similarly to Justin Bieber’s aesthetic, Styles’s concert wardrobe is flashy, bright, colorful, and cheerful.

Styles likes to play with androgyny in his fashion, and this shows with pieces such as a rainbow sequin jumpsuit, flurry black trench coat, high waisted fitted pants, and vibrant jewelry. He displays different looks in each concert, but all of them send the same message of acceptance and creativity. Styles proves with his fashion that you don’t have to fit yourself into a certain mold because of what society deems correct. His fashion is avant-garde and inspiring for younger people who want to display their personality through their clothing.

Eilish kicked off the Happier Than Ever World Tour in February of this year. In contrast to other musicians like Bieber and Styles, Eilish’s tour sends off dark and mysterious vibes. Although she is enthusiastic and passionate, she isn’t always cheerful with her messages. Her clothing choices reflect her aesthetic, lyrics, and thoughts and are tools for spreading her beliefs. Eilish usually opts for oversized clothing displaying creative graphics. She layers this with chunky jewelry and accessories such as gloves, nike socks, and nike sneakers. Eilish’s fashion is groundbreaking because it shatters the belief that women performers must expose their bodies in order to gain attention. Eilish likes to wear more form fitting outfits as well, but her comfy oversized outfits send the message that women shouldn’t be forced to advertise their bodies in order to achieve success in the music industry. Her outfits are chic, simple, original, and radical.