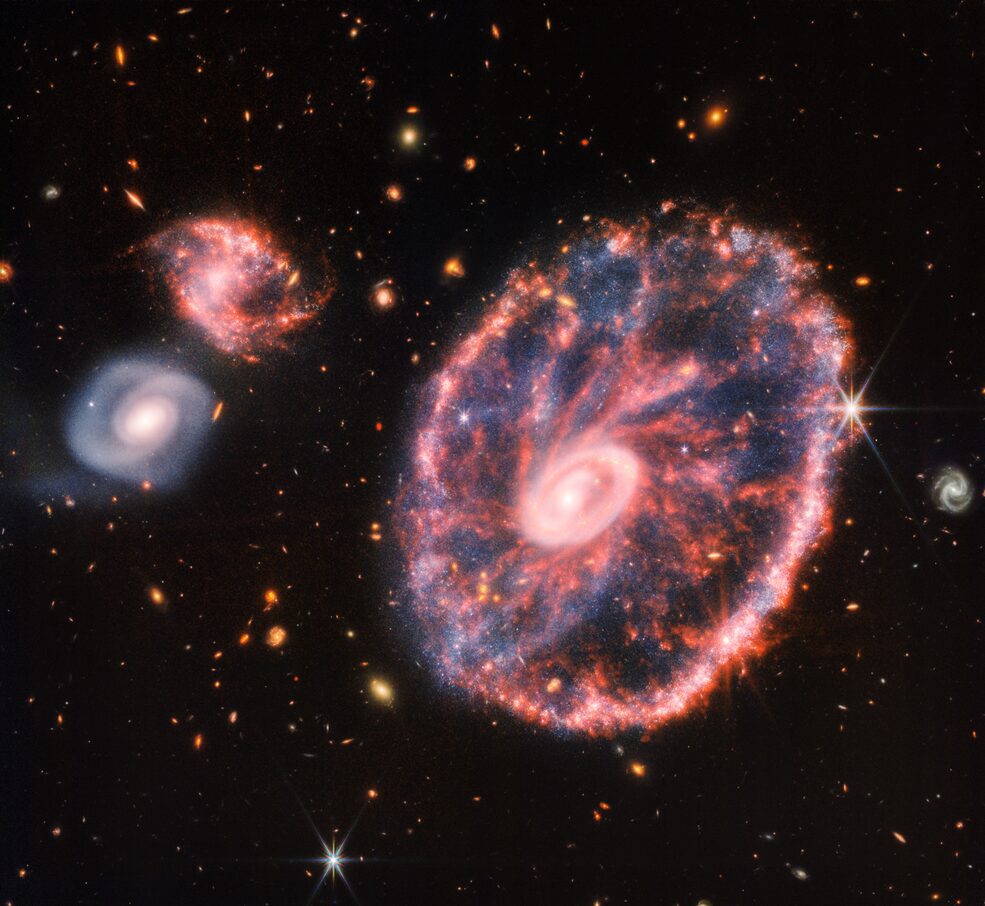 Following the James Webb Space Telescope’s launch on December 21, 2021, space imagery has changed forever. A departure from the Hubble Telescope, the Webb Telescope is better equipped to capture the cosmos. Using infrared technology, the observatory’s resolution is stronger and more precise than its predecessor. Exciting astronomers, the Webb Telescope provides the possibility for us to better understand our universe — to learn about the first stars, the formation of the galaxies, and, even, the potential for habitable planets. While most pertinent to the scientific community, the general public has thoroughly enjoyed the telescope’s findings.

Officially beginning its operations on July 12, NASA has released images to the public of the telescope’s discoveries. The agency’s most recent posting on August 2nd of the Cartwheel Galaxy is monumental in space exploration.

Even though the galaxy had been photographed by the Hubble Telescope, due to the accumulation of hot dust around the galaxy, the images have been limited in scope. The infrared technology of the Webb Telescope — its near-infrared and mid-infrared instruments which work hours to collect and process data —  bypasses the issue of clarity. What was once invisible to the human eye is now viewable to the entire world.

While the enhanced imagery aids scientists in identifying the galaxy’s evolution over billions of years, many have been mesmerized by its artistic beauty. Truly coalescing the fields of science and art, the observatory shows that the divide between the two is artificially constructed.

Located 500 million light years away, the galaxy was given its name for its cylindrical shape — following a collision between two galaxies, the produced structure took a ring-like appearance. The Hubble’s photograph was muted by its technological capabilities. Clouded by the dust, the galaxy is given a light blue hue. A granular void of space acts as the background to the image. The Webb’s photography is much sharper and more artistically pleasing. The photograph properly captures the two rings of the galaxy, a deep contrast between the colorful, intertwined red and blue rings. The void of space is fully imaged in the photograph — a darker than dark vacuum of blackness speckled with radiant stars.

Giving insight to our world, the Webb Telescope not only provides more information on the universe, but challenges our collective notion of the known and the imaginary.

In a 2018 interview with BBC, artist Nahum said:  “sometimes I think of space as a black canvas… Why should scientists have unlimited reign? Why can’t artists… have equal access to this new frontier?” Maybe it is neither scientist nor artist but the universe itself which has the final say. Who said it was a blank canvas?