Copyright Infringement Claim Over Banana Artwork Will Go To Trial 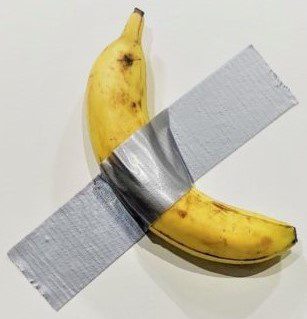 Copyright Infringement Claim Over Banana Artwork Will Go To Trial

COMEDIAN: Artwork of a banana duct-taped to a wall. Image via Wikipedia.

Following the craze of Maurizio Cattelan’s artwork “Comedian,” a banana duct-taped to a wall, many artists have since then claimed copyright infringement — most recently in Paris, France a few months ago. In 2019, Cattelan sold three identical (or as close as he could to finding the same shaped bananas) versions of “Comedian,” all of which sold between $120,000 and $150,000. The banana went viral after Art Basel in Miami Beach bought the first version of the art piece and placed it on their gallery wall.

With its simplistic design, solely a fruit and a piece of tape, Cattelan’s artwork drew both praise and criticism, both among the art community and general population. For some artists, the similarities between their own works and Cattelan’s warranted legal action for plagiarization. In a facebook post following the first “Comedian” sale, artist Joe Morford of Glendale, California claimed copyright infringement on his 2000 artwork “Banana & Orange.” Monford wrote, “I did this in 2000. But some dude steals my junk and pimps it for 120K+ in 2019. Plagiarism much?”

Now, three-odd years later, the claim has been recognized by the South District of Florida Court following Judge Robert N. Scola, Jr deemed the allegation sufficient for a case. Monford is seeking nearly $400,000 in his claim: a combination of the three sales of “Comedian” and court expenses.

Copyrightlately.com explains, despite now going to court, Monford’s case is an uphill battle. “Without any direct proof that Cattelan copied his work, Morford is required to plead and then establish: (1) that he owns a valid copyright in Banana & Orange; (2) that Cattelan had access to Morford’s work; and (3) that the two works are substantially similar in their protected expression.”