Walking around the Ancient Greek and Roman wing of The Metropolitan Museum of Art, it’s inconceivable to witness a homosexual couple on display. Sure, you would see incredibly detailed torsos, chiseled to the gods, crafted by male artists, but nothing explicitly…gay.

That’s why some are flabbergasted to learn homosexuality was socially acceptable with the polytheistic Ancient Greeks and Romans, with widespread Christianity being a large reason for homosexuality going underground in Europe.

This Pride Month, it’s crucial to acknowledge the history of homosexuality throughout ancient art around the world, the art you aren’t shown in your high school history classes. 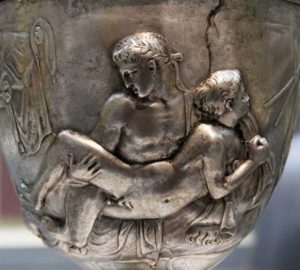 Depicted above is The Warren Cup, an ancient Roman silver drinking cup. The cup was most likely commissioned by wealthy members of society to serve as a talking point during meals. The high relief sculptures paint a scene of a homosexual act about to take place, with the dominant, older (usually bearded) “erastes” preparing the younger, passive “eromenos.”

Homosexual acts among older and younger men (aka pederasty) were common in Ancient Greece and Rome. Older men served as mentors to younger boys, teaching them wisdom and sexual activity. Most Roman emperors such as Hadrian, were known to have male lovers. Greek gods, like Zeus, also loved both men and women throughout myths. 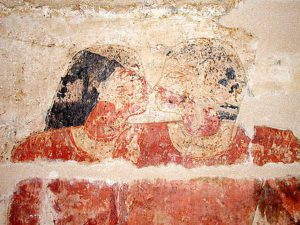 Jumping over to 5th Dynasty ancient Egypt, we have the tomb of Khnumhotep and Niankhkhnum. Both married to women, they ended up buried in the same tomb, a practice uncommon for the men of ancient Egypt. Even more uncommon is the fresco of the two men touching noses, a form of kissing in ancient Egyptian society.

Many scholars argue that this may be the first homosexual couple depicted in art, while others say the two men were conjoined twins. While ancient Egyptians were known to value fertility and heterosexual relations, medieval rabbinical philosopher Maimonides claimed lesbianism to be a characteristic of Ancient Egypt. 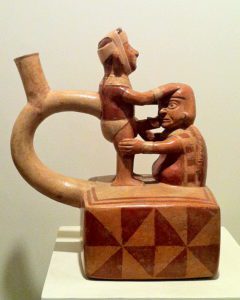 Across the Atlantic, in Ancient Peru, the Moche people left behind ceramic figurines of their sexual practices. The figures illustrate homosexual acts between men and women alike, giving an insight into an otherwise lost culture.

Ancient art authenticates that homosexuality has existed for thousands of years, if not always, liberally encompassing the globe.

Taraji P. Henson Surprises Target Guests in Celebration of the Exclusive Launch of TpH by TARAJI at Target!