Supreme Court Justice Ruth Bader Ginsburg (The Notorious RBG) passed last week at the age of 87 and it was a tough goodbye for a lot of people who admire her both professionally and personally. The iconic figure rose to her power on the highest court in the land in 1993 after being appointed by former President Bill Clinton. She continuously collected admirers over the years as she ferociously fought for women’s rights time and time again.

Especially when she contested laws for discrimination “on the basis of sex.”, like in the case of Moritz v. Commissioner 1972, in which Justice Ginsburg developed strategy for her succeeding cases. Portrayed in the most recent film, “On the Basis of Sex,” viewers get a chance to see how Ginsburg balanced her work life balance as a mother and wife, successful lawyer and professor, as well as champion of women’s rights. Her death has reignited a fire in people, especially women all around the world that have her to thank for her heroic achievements in fighting against gender discrimination.

But in such a politically motivated country, it’s tough to mourn such a massive figure, like Justice Ginsburg, without immediately looking ahead toward the next move.

Just one week after her death, arrangements began for naming her replacement.The recent passing of Supreme Court Justice Ruth Bader Ginsburg further raised tensions given the current state of the upcoming general election. Especially for those on the left who align themselves with her previous court decisions and overall ideology, and are looking to hold off until after the election. Although Republicans, like Mitch McConnell are urging a replacement, back in 2016 McConnell made the opposite argument to the American public. According to CBS News, McConnell’s statement in 2016 read, “The American people should have a voice in the selection of their next Supreme Court Justice. Therefore, this vacancy should not be filled until we have a new president.” The difference being a party alignment has adjusted with President Obama in office then, and now President Trump.

Regardless, the tune has changed in the past couple days as naming her replacement would certainly pass in a mostly republican Senate, in addition to lining the Supreme Court with right-leaning justices to uphold as well as tear down some previous decisions from the court. Perhaps the most well-known would be Roe V. Wade, which gives the liberty to the people to access abortions–free from government control. And if that succeeds as planned, it would be a major win for the republican party. But as Justice Ginsburg once said in reference to abortion, “This is something central to a woman’s life, to her dignity. It’s a decision that she must make for herself. And when government controls that decision for her, she’s being treated as less than a fully adult human responsible for her own choices.” 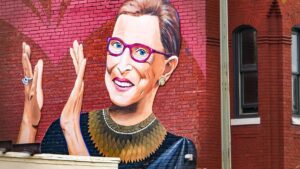 Justice Ginsburg held onto her position for as long as she could to uphold those beliefs that she fought for. And with her death as recent as it is, for many like myself, choosing to put aside politics feels like repayment. Instead of diving right back into the political atmosphere, taking some time to reread her opinions, search through her memorable quotes, and watch documentaries celebrating her life feels like a more rewarding option.

So, here are a few quotes courteous of CNN:

“When I’m sometimes asked ‘When will there be enough (women on the Supreme Court)?’ and my answer is: ‘When there are nine.’”

“Fight for the things that you care about, but do it in a way that will lead others to join you.”

“We are at last beginning to relegate to the history books the idea of the token woman.”

“I ask no favor for my sex. … All I ask of our brethren is that they take their feet off our necks.”

So, whether you refer to her as Ruth Bader Ginsburg, The Notorious RBG, and or Justice Ginsburg, she’s a legend and the influence she bestowed upon a generation is unparalleled. My only hope is that she may rest knowing that her job is done. We’ll take it from here.