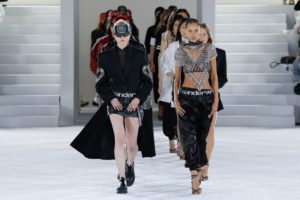 Traveling with his family for the first time in twenty years, Alexander Wang reflected upon his heritage, and how his journey through life as a Taiwanese-American designer could be represented in the present moment. Immigrant Americana fused both cultures to give off a bad ass yet laid back vibe, illustrating how America isn’t only about the labels or stereotypes, it’s about the freedom of spirit to change and become something greater.

Collection 1 was held at a South Street Seaport rooftop Sunday night, where many celebrities, top models, industry professionals and fans gathered together for the exclusive show. Alexander Wang’s family were sitting front row for the first time and at the show’s closing, Alexander gave his father a big hug where the pride of the moment was captured beautifully. 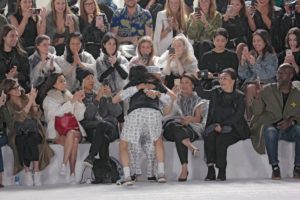 The line had Axl Rose inspired bandanas, sporty casual looks with bright and dark reds, high quality leather pants, shorts, and skirts with “alexanderwang” across the waistline in lowercase writing, as he is redirecting the brand to a more sleek mark. The velvet cloth with silver embroidery shows precision and the styling of all the pieces reflected true american grit meeting down the mysterious silk road and traveling through time and space to liberate all boldly stating how “This is America” according to alexanderwang. He used a munificent amount of safety pins to design a sexy look that made his origins come alive with so many accessories that complemented the “biker chic” attitude.

“I was inspired by them coming here and not speaking English, going to the grocery store and not knowing how to buy food, and all the jobs they had to do to build a better life for me. And taking that story and infusing it with pop culture Americana references that I grew up with like American football, motorcycle Harley Davidson culture, and rock ’n’ roll music. And then taking Chinoiserie and my heritage and infusing it into that world. I wanted to find a new way to express inclusivity and create a new narrative of what that might look like,” Wang expressed to an editor at Harper’s Bazaar. 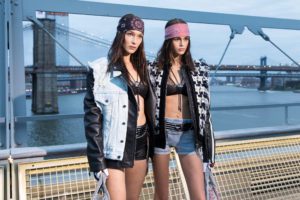 His visions are put to fabric with such creativity, unexpected angles and accessories that gives his designs a wave of “Je ne sais quoi” which keeps his audience constantly entertained and wanting to learn more about how his mind conceptualizes imagery, where his focus came from this time and how he sealed it all together. That is key to being a true visionary and as we get a preview through Immigrant Americana of what is to come in July and December, we will still remain astonished to the variety of influence for collections 2.

Not only is America defined creatively, but the seasonal shifts in retail should prove lucrative to his brand. Alexander Wang is making the most of his opportunity in this country and showing how with ambition, beliefs, and direction, you can build an empire.