Today on July 2nd we celebrate tennis player Helen Wills who, on this day in 1927, won her first of eight Wimbledon Women’s Tennis titles. Wills’ dominance in tennis made her the first female athlete to attain international fame. Despite her introverted and quiet nature, she was regularly in the limelight for her elegance, tennis skills, and famous friends. Though she grew to attain immeasurable success, she was not always the dominant athlete we know her to be today.

Wills’ was born in California in 1905, fragile and small. Her father encouraged her to pick up outdoor activities such as swimming, riding, and eventually tennis to improve her physical condition. By the time she was 16 she was barely 5’0, but her tennis skills had improved drastically, allowing her to win California State Championships. A year later, Wills would grow seven inches and become the youngest National Champion of her time. This was just the start of her highly decorated career. 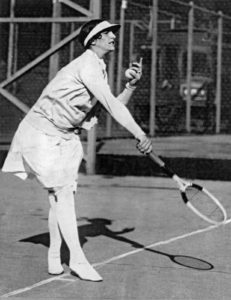 Though Wills’ skills on the court became undeniable as she amassed an 158 match winning streak, graced the cover of Time magazine twice, won two Olympic gold medals, and ranked No.1 nine times worldwide, she drew mixed reactions from the public for her stoicism. She rarely acknowledged the crowd or her opponent and constantly maintained a straight face throughout her matches. Described as awkward, quiet, and private, she earned the nickname “Little Miss Poker-face” from the press. Though in truth, Wills admitted that her stoicism in games was attributed to her intense focus during matches. Wills was the subject of media attention because she was relentlessly herself and did not care to fit the status quo.

Wills’ personality was not the only thing that intrigued the public, she also gained notoriety for training with men to increase her power and precision. Though she was always noted for her grace and fluidity on the court, her training also allowed her to have  unmatched stamina and strength in her matches. In 1933, this proved to be effective against a male opponent as well. In an exhibition “Battle of the Sexes” match, she went up against 8th ranked American male tennis player, Phil Neer. Wills won the game 6-4, 6-3, reaffirming why she was often called “the most dominant tennis player of the 20th century” 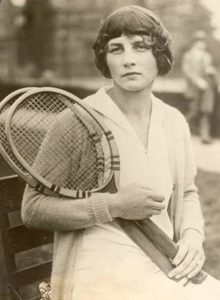 Wills was not only a great athlete, but an artist as well. She wrote poetry and avidly painted throughout her life. In 1930 she befriended infamous artist Frida Kahlo and her husband Diego Rivera. Wills was asked by Rivera to be the model for his mural ‘Allegory of California’. However, he was later asked to not include any living subjects in his mural, and thus darkened Wills’ hair and broadened her facial features in the painting to erase any resemblance to the international star. At the time, her appearance in that mural would be instantly recognizable as she built quite the reputation as a public figure.

Wills’ career ended in a way just as interesting and unpredictable as she was when her index finger was bit off in a dog fight between her dog and a fox terrier. Despite her retirement in 1938, Wills walked away from one of the most successful tennis careers ever. Wills lived until 1998, dying at the age of 92. She left $10 million to her alma mater, the University of California, Berkeley, in her will, to fund the creation of a Neuroscience institute.