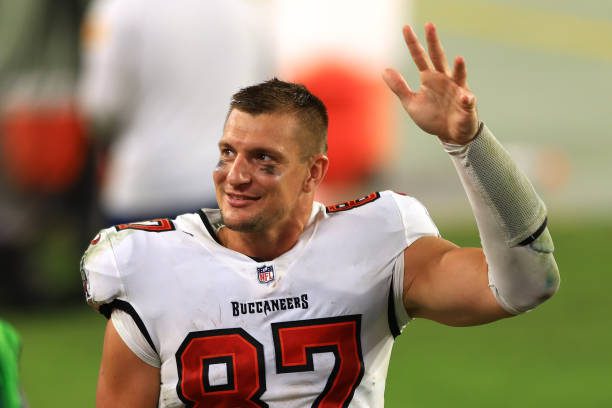 It’s official, NFL tight end Rob Gronkowski has officially announced his retirement. The thirty-three-year-old began his NFL career in 2010 as a 2nd round pick with the New England Patriots. He played 9 seasons with them, alongside longtime quarterback Tom Brady. This is not the first time Gronkowski has announced his retirement – back in 2019, he initially retired, stating his previous injuries had taken a toll on his mental health. The tight end is known to have been on concussion protocol since 2018 after suffering a head injury during a game with the Jacksonville Jaguars. His first retirement brought much needed attention to players who suffer head injuries that go undocumented.

Just a year later, Gronkowski re-entered the NFL. With pressure from a familiar Tampa Bay quarterback, he joined the Buccaneers for his last two seasons. Unfortunately, his injuries never seemed to leave him – in his last season he suffered a punctured lung during week 3. However, he made a successful comeback and by week 11, was putting out some amazing stats.

Yesterday Gronkowski announced via his Twitter page his second retirement. He made a statement that called on his college dream to “play in Tampa for the Tampa Bay Buccaneers”. Moreover, how his journey there had “blown away what he originally wrote in college”. Recollecting his first retirement, then rejoining the NFL to win his 4th championship, he states it’s “now back to chilling out”.

Life Outside of Football

Outside of his football life, Gronkowski has a Youth Foundation “dedicated to inspiring youth to reach their maximum potential through sports, education, community and fitness”. When he’s not on the field he visits children’s hospitals and is a regular with the Make-A-Wish Foundation. So much so that in 2019, he accepted a Merit Award from United Service Organization, an organization that recognizes persons creativeness and their commitment to volunteerism.

Gronkowski’s final stats for 11 seasons include 621 receptions, 9,286 yards, 92 touchdowns, being a 5X Pro Bowler, a 4X First-team All-Pro, and a 4X Super Bowl Champion. He is a beloved player and the action he brought onto the field will never be forgotten.