It’s been a rough year with melancholy hanging in the air. Unfortunately, we’ve had a couple of celebrity suicides, and Rick Genest, also known as Zombie Boy has passed recently from an apparent suicide. 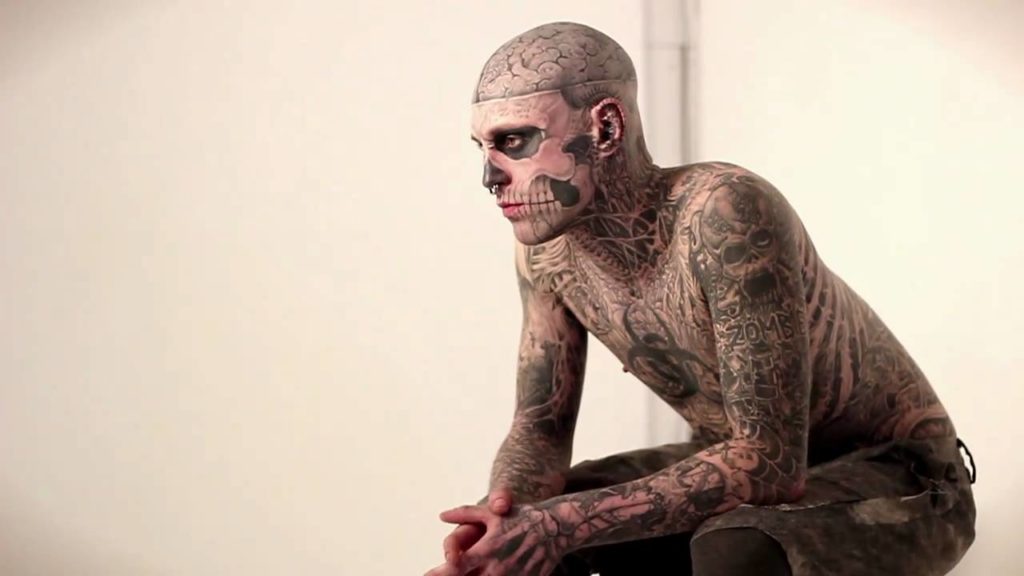 Genest was a model who was well known for his head-to-toe tattoos and he appeared in Lady Gaga’s 2011 music video for the song, “Born This Way.”

Genest’s career started in his home country of Canada where he starred in a circus show called Lucifer’s Blasphemous Mad Macabre Torture Carnival. The show was an imaginative recreation of what a night in hell would look like.

He is known as Zombie Boy due to his appearance. He had a shaved head and a tattoo on his face that made him look like a skeleton. Genest got into modeling when he was scouted out via social media by Nicola Formichetti. The designer cast him in a menswear show.

Genest has appeared in a few magazines like GQ Style (UK) and Vogue Hommes Japan. He was featured in a campaign called “Go Beyond the Cover,” where Dermablend covered up all his tattoos with makeup and then he takes off all the makeup.

Zombie Boy has also done some acting, mostly short films but he did have a small role in 47 Ronin with Keanu Reeves. Genest was multi-talented as a performer, he also worked on a collaborative album with ex-Rob Zombie guitarist, Riggs.

On Aug 1, Genest was found dead after a fall from the balcony at his apartment. Police ruled it as a suicide.

Lady Gaga made a comment on Twitter: “The suicide of friend Rick Genest, Zombie Boy is beyond devastating. We have to work harder to change the culture, bring Mental Health to the forefront and erase the stigma that we can’t talk about it. If you are suffering, call a friend or family today. We must save each other.”

If you are having thoughts of suicide, call the National Suicide Prevention Lifeline at 1.800.273.8255 or visit Speakingofsuicide.com/resources for additional resources.

Clear is the New Black

Clear is the New Black