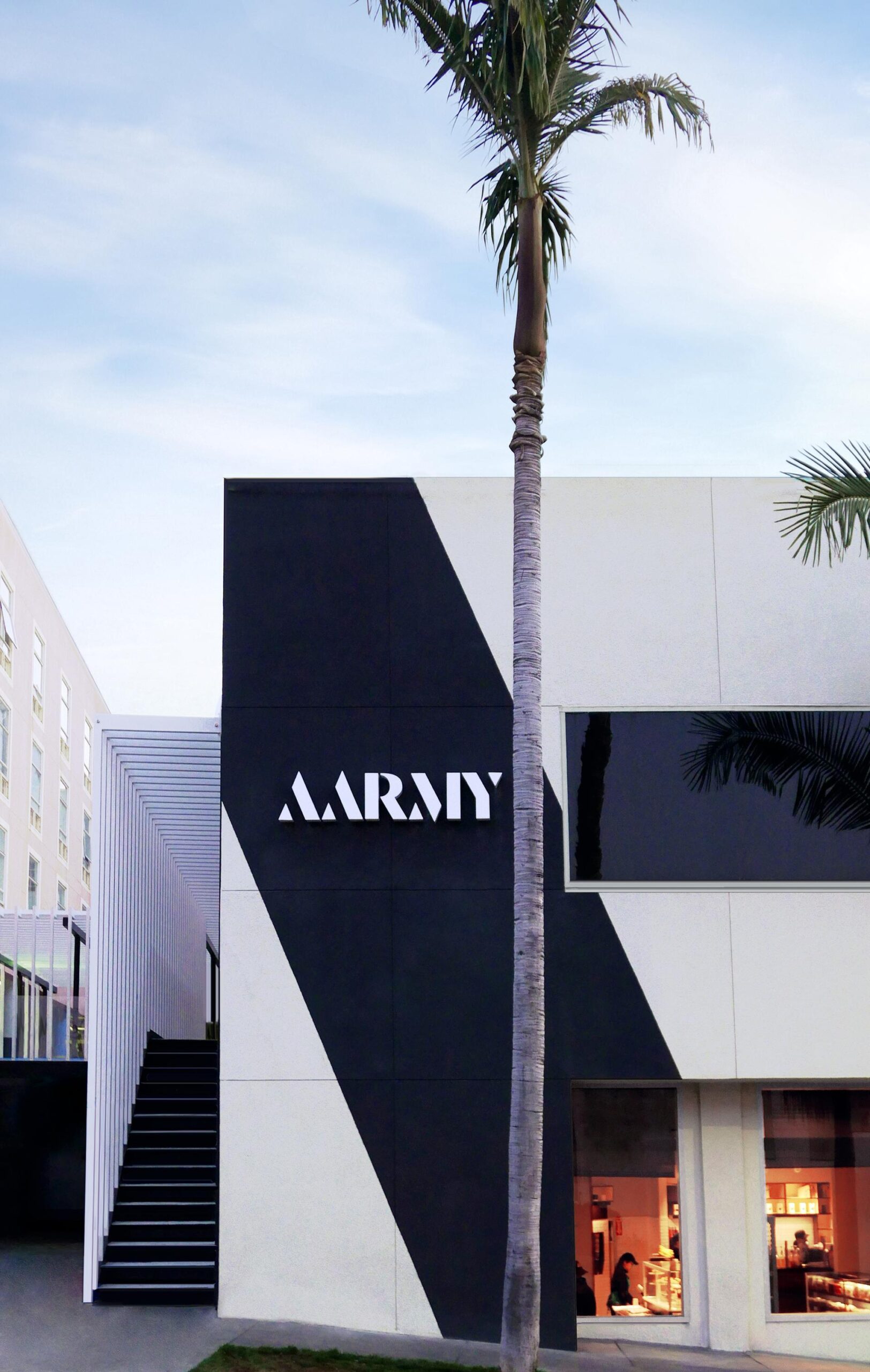 ARRMY’s co-founders, fitness visionaries Akin Akman and Angela Davis, and renowned creative strategist Trey Laird announce their second pop-up facility in West Hollywood, California. AARMY will bring its revolutionary approach to team training to the West Coast, introducing first-in-class coaching methods that condition the mind and body, creating athletes out of all of us.

The pop-up is designed in partnership with acclaimed design firm Alvarez & Vincent Architects, the design pioneers behind Nike’s exclusive Los Angeles special events space Room 72. In addition to two training rooms, one for boot camp and another 55-bike cycling room, this location features an outdoor terrace as a meeting place and recovery area for AARMY’s athletes. The pop-up will offer a retail space for AARMY gear that will have monthly releases of new product, and locker rooms supplied with Aesop products.

AARMY’s mission is to build athletes. To make the principles and practices of sports training usually reserved for pro teams or elite academies now accessible to a wide audience of people at all levels. Focusing on a higher quality standard of physical training, combined with mental conditioning and inspiration, AARMY seeks to transform the fast-growing boutique fitness movement and create a new category: community-based team training.

AARMY serves as the common thread to bring all types of individuals together in an inclusive environment to promote a higher standard in our physical, spiritual & mental state. Through AARMY, we can ultimately realize our full potential.

Ahead of plans to open permanent AARMY HQs in both LA and NYC in 2020, this second training facility is the next step in introducing the AARMY methodology to a wider population. Evolving past the gym experience, AARMY will also launch a subscription-based digital app with original on-demand fitness content early next year. Inspirational programming from leading forward thinkers will round out the content lineup. Also in 2020, custom designed equipment for each modality will launch with propriety technology to both measure your performance and track your progress.  AARMY plans to launch additional product categories in the immediate future.

Akman, the world’s top-performing group fitness coach, and Davis, the leading global force in motivational group coaching, both grew up training to be professional athletes. Akman, AARMY’s Chief Fitness Officer, was a tennis prodigy at the prestigious IMG Academy. At IMG, Akman trained under famed coach Nick Bollettieri, who instilled in him the drive and discipline he would later use to revolutionize group fitness. More recently, Akman’s innovative and intense Cycle and Bootcamp classes have amassed a wide and high-profile audience, including tennis champion Maria Sharapova, fashion supermodel Karlie Kloss, and actor Jake Gyllenhaal. “I believe there is a powerful athlete inside all of us,” said Akman. “A champion’s mindset waiting to be unleashed! I have seen firsthand the effects of this training philosophy my entire life and, along with my co-founding partners Angela and Trey, am incredibly proud to be able to now bring this to more people around the world.”

Davis, AARMY’s Chief Motivation Officer, is a decorated former track and field star who once ranked in the top 25 in the world for 100 meters and advanced to the semifinals of the USA Track & Field Olympic Trials. More recently, she created Los Angeles’ most in-demand group cycle class, training influential cultural forces such as Beyoncé, Jay-Z, David Beckham, and Kerry Washington. Equally a powerhouse in fitness coaching and motivational speaking, Davis was featured on Oprah Winfrey’s 2020 Vision Tour/Your Life and Focus and frequently appears as a motivational speaker at leading events across the country. “None of us fully know what we are truly capable of until we commit to putting a demand on our potential,” added Davis. “We are all created for a purpose, and to unlock what we are each called to do in this life is a true gift. AARMY will help get you there! Physically and mentally, to bring out the very best inside us all.”

Laird, AARMY’s CEO, is widely considered one of the world’s most in-demand branding, advertising and marketing experts, working with the most prestigious brands across fashion, beauty and luxury, including Tiffany & Co., Tommy Hilfiger, Estée Lauder, Tom Ford, Karl Lagerfeld, and Calvin Klein, among countless others. Laird said, “AARMY is about building constant progress. Practice, transformation, never giving up! It’s about taking the tools of advanced athlete training methods—focus, drive, discipline—and delivering them to all levels in an exhilarating music-inspired team environment. Whether you are following live at an AARMY HQ or digitally anywhere in the world, you will always have an AARMY behind you and an AARMY beside you, and nothing is more powerful than that!”