The Polo Bear has shown up before in Ralph Lauren designs from embroidery to patches. The first Polo Bears were introduced in 1991 as limited-edition stuffed bears produced by Steiff, the German toy manufacture, and dressed in miniaturized Polo Ralph Lauren apparel—think fashion forward Build-A-Bear.

The Polo Bear watches are the first time Ralph Lauren launches timepieces for the Polo brand. There are four different unisex bear watches that will be featured, the Flag Bear, Martini Bear, Preppy Bear, and Spectator Bear, each piece retailing for $2,000.

The Flag Bear wears the namesake sweater and a denim jacket with jeans. Martini Bear as you would expect is in a tuxedo with embroidered velvet slippers. Preppy Bear wears a navy blazer and khaki pants. Spectator Bear wears a camel hair overcoat, sweatshirt and saddle oxfords. 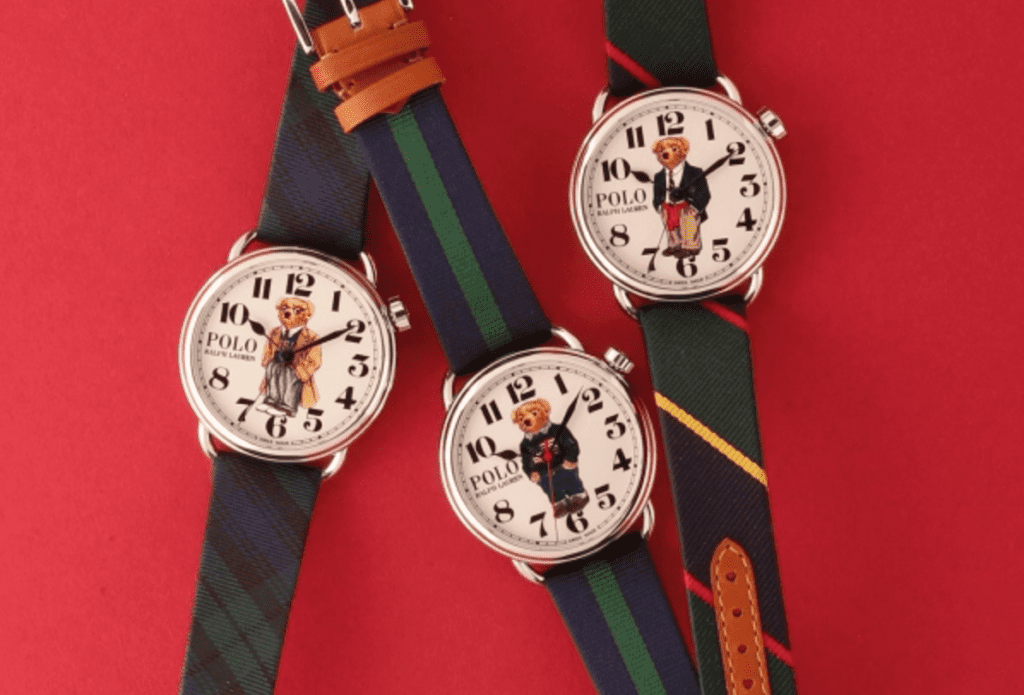 “It’s purely a fun project. It was not about who’s out there and what they are doing,” said Lauren in an interview at his Manhattan office last week.

Each watch can be customized with interchangeable straps crafted from silk twill patterns. The buckles on all the watches are engraved with Polo made from a stainless-steel pink buckle.

The watches are manufactured in Switzerland via a partnership with Compagnie Financiere Richemont. The watches will launch in select Ralph Lauren stores and on the Ralph Lauren web site, beginning next month.

“I’d like to kids to have it. That might be next,” Lauren said in an interview. A collection for kids might be in the works next. The Polo Bear watches are limited edition but come with the hope that the stuffed bears will make a comeback.

A biographical documentary by director Susan Lacy on Ralph Lauren will be coming to HBO early next year. An interesting way to get a look at the designers roots and the brands as it celebrates the 50th anniversary.