On May 29,2019 Rihanna launched her first fashion collection with emerging designers titled “Release 5-19” that was put together by her numerous amount of supportive team members. It accentuated all aesthetic ability in her creative format incorporating agamcus vibes to her premiered collection. Rihanna’s monumental, artistic pieces and more: 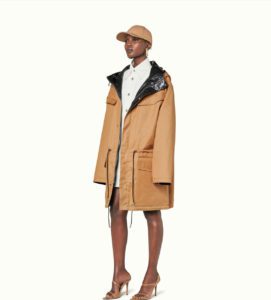 It will not come as a shock that some customers will have to put a good amount of money aside to get their hands on luxury pieces of her fashion line, but Rihanna has opened her launch with a other affordable prices for certain items for her consumers as well as you see on her website. Rihanna proved that as a business woman from her FentyBeauty make-up and Savage X Fenty lingerie collection, to her debut collection that her profit margins will be highly successful, enhanced credibility and competitive edge will expand her success.

Rihanna stated with New York Times interviewers that “Her design inspirations, she said, came from everywhere, particularly her journey as an immigrant, from Barbados to America and now London and Paris. “Angles, textures, colors — I screen-shoot them constantly, bookmark them, folder them, then text them all to Jahleel,” she said. “Later, we have a conversation. And hopefully, then, the magic happens.”

Her long-term Manager John Brown stated to New York Times “Rihanna has designed clothing and products for women to uplift and provide a sense of vitality for women across the world. She is setting the tone for mogul business owners whom are women. Her creativity is a combinational force with her ability to inspire those that value her keen eye of create art forms and her accumulated insight on the fashion industry itself.”

Due to Rihanna’s value in the process of her brand it has led her to go beyond her capabilities.

Father’s Day Gifts for All of The DILFs Out There!

When Art Collides with the World of Fashion

Father’s Day Gifts for All of The DILFs Out There!