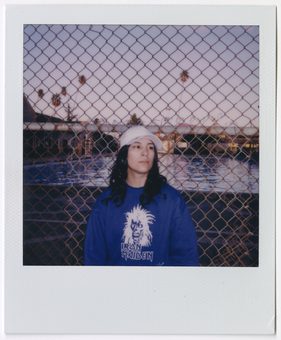 The track is taken from zzzahara’s debut album, Liminal Spaces, slated for release October 21 via Lex Records—pre-order/pre-save it here.

“‘julia’ is one of the first songs I ever wrote,” zzzahara says. “One of those where I knew I had nailed the chord progression. I was in highschool and the pressure was on because our school’s Battle of the Bands was taking place in a few weeks. This girl I sort of liked—I say sort of because she could never make up her mind about me—was performing at the Battle of the Bands show so I decided to get to writing! ‘Juliaaaa,’ I yelled with emotion while I was in my room, hitting the first chord. I remember that moment feeling like a big accomplishment. I knew I had made something catchy. When the day came and I went to perform the song on stage, she was there in the audience. I sang the first few lines and she ran out of the auditorium.”The new track follows initial album offerings “bulletproof,” featuring Los Angeles-based musician and producer Mareux, “get out of la,” “lust,” “gurl” and “cupid’s out tonight,” which FLOOD calls “a playfully bitter fantasy about a less-than-helpful evil cousin of cupid,” while American Songwriter calls it “mysterious and riveting,” comparing zzzahara’s voice to an “ancient secret.”Additionally, they have a host of tour dates this fall, including stops at Brooklyn’s Sultan Room, San Francisco’s Rickshaw Stop and LA’s The Echo and Lodge Room, the latter of which is the Liminal Spaces album release show—complete list of dates and ticketes are below.Born to Filipino and Mexican parents and raised in Highland Park where they still reside, zzzahara is the moniker of queer songwriter and guitarist Zahara Jaime. Growing up in Los Angeles, they felt disconnected from Southern California’s predominantly straight white male rock scene and discovered making music as a way to process the experience of living in an ever-gentrifying city.They became the touring guitarist for Eyedress aka Idris Vicuña in 2018, which spawned the collaborative duo The Simps, who released their Siblings LP earlier this year. Following their solo debut EP Simp.Wave in 2021, zzzahara signed to Lex Records and put the finishing touches on their forthcoming debut album, a collection of songs about queerness, love, lust, absurdism and feeling lost that trace their stylistic and emotional evolution from childhood through present day.