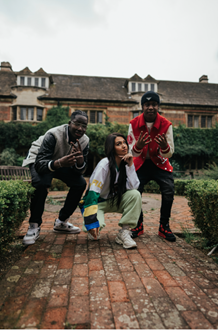 While their unique rapping style and blossoming partnership is noted as their most distinguishable feature, A1 x J1 are continuing to make stamps on the industry with their re-imaginations of classic pop tracks. This time, it’s Mabel’s ‘Finder’s Keepers’ that’s getting a creative upgrade. Filled with charm and a long swung trap beat, the track is easy whilst still maintaining a rich personality on the boys behalf, to make it the summer anthem.

Speaking about working closely with Mabel on the track, A1 x J1 have said:

A1: “Working with Mabel has been amazing – she’s been one of our dream collaborators since we started so it’s sick actually getting to work with her.”

J1: “Mabel is massive so it’s mad we got to work with her on this record. Her voice is sick”

Speaking about working with the boys, Mabel has said “When I first heard ‘Deal or No Deal’ and the ‘Finders Keepers’ sample that they’ve used I was so excited! It feels like such a fun full circle moment to be a part of this record with A1xJ1 and I’m very honoured to be a part of their journey!”

After meeting on the off chance through the Houseparty App in 2020, A1 x J1 have gained unimaginable success at the young age of 16 and 18, not to mention whilst doing so in the unprecedented circumstances of a pandemic, and school. It’s been a whirlwind year for the 16 and 18-year-old, who, in the short time they’ve known each other, have pulled off the impossible.

A certified festival essential, the new single is another example spotlighting the uncompromising rise of A1 x J1.