The 2022 Super Bowl Halftime Lineup Is Stacked With Dr.Dre, Snoop Dogg And More 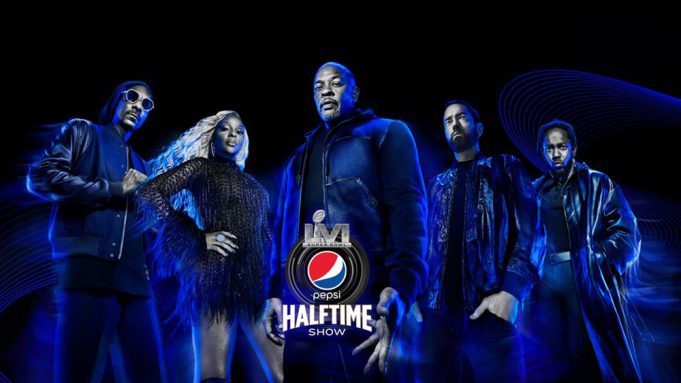 The 2022 Super Bowl Halftime Lineup Is Stacked With Dr.Dre, Snoop Dogg And More

For the third consecutive year, the NFL is teaming up with Pepsi and Roc Nation for the Super Bowl LVI halftime show. This year’s lineup includes Dr. Dre, Snoop Dogg, Eminem, Mary J. Blige, and Kendrick Lamar. The show will take place at SoFi stadium in Inglewood, California on February 13th, 2022.

In an epic tweet from Pepsi, they drew attention to the number of Grammys and No. 1 Billboard albums the artists have.

Dr. Dre has six Grammys, after co-founding Death Row Records. Death Row Records is the same record label that set off Snoop Dogg. Snoop Dogg is a 17-time Grammy Nominee. Eminem has 15 Grammys from 11 studio albums. Mary J. Blige has won nine Grammys and is one of the best female R&B and hip-hop artists to exist. Kendrick Lamar is another artist who has done an impeccable job making a name for himself. Lamar has 13 Grammys.

Jay-Z made a statement, mentioning how many of the artists have ties to California. In his statement he says,

“Dr. Dre, a musical visionary from Compton; Snoop Dogg, an icon from Long Beach; and Kendrick Lamar, a young musical pioneer in his own right, also from Compton; will take center field for a performance of a lifetime.”

Jay-Z went on to say, “They will be joined by the lyrical genius, Eminem and the timeless Queen, Mary J. Blige. This is the Pepsi Super Bowl Halftime Show. This is history in the making.” He was not lying, this halftime show will be history in the making. Although the NFL teamed up with Jay-Z and his Roc Nation Entertainment company in 2019, this will be the most memorable performance yet.

Dr. Dre mentioned how big of a show this will be for him saying, “The opportunity to perform at the Super Bowl Halftime Show, and to do it in my own backyard, will be one of the biggest thrills of my career.” Not only will Dr. Dre perform in his backyard, but he is performing with artists he has had multiple collaborations with. He went on to say, “I’m grateful to Jay-Z, Roc Nation, the NFL, and Pepsi as well as Snoop Dogg, Eminem, Mary J. Blige, and Kendrick Lamar for joining me in what will be an unforgettable cultural moment.” This halftime show will be an unforgettable one.