A Campus’ Art of Architecture and Student Space

A Campus’ Art of Architecture and Student Space

Most notable is The Fisher Performing Arts Center  (pictured below). On the very northern end of campus, this theatre and studio building was designed by renowned architect Frank Ghery. The building’s shiny, sharp metal exterior took three years to build and cost almost $30 million.

More classical structures still stand, like Stone Row, a student facility first built in 1891. Today, the grey brick building lays atop a hill, covered in lush ivy that blooms in the spring and summer while flourishing into all the tones of sunset in the fall.

A little less than 2,000 undergraduate students are enrolled, both on and off campus. Diverse in backgrounds and study, the student body is one to be reckoned with in all senses, but especially artistically. Though known for its scenic campus, the students are the powerhouse of this college. This population is known to push the College forward in its creative and professional endeavors.

One of the most common occurrences of student expression on campus is what could be called “graffiti.” The campus lends itself to open creation, as long as it is not offensive in nature. There are murals painted onto sides of the Fisher Studio Art Building, both by students and commissioned artists. This has led to the proliferation of student led spaces for the arts, like Smog. Smog is a music venue designed and entirely immersed in graffiti. Began back in 2012, an empty garage by a clearing was converted into the wildly popular student hub (seen below). 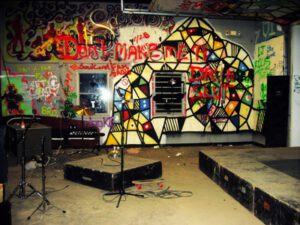 It’s held the likes of up and coming indie bands and artists like MICHELLE, as well as on campus student DJs. More importantly, its internal walls are a geography of graffiti art, painted by the students themselves. A pink, neon sign hangs in the entryway, its cursive spelling SMOG. From flowers, to anamorphosis aliens, to slogans like: “CONSENT MATTERS,” this music venue speaks to the power of informal graffiti. Opinions get heart; voices are given.