This Thursday, I got the chance to enjoy a rock concert titled “Punk Black: Battle of the Gods” at Union EAV. I hate to be the guy that comes late and leaves early, but ya boy had to wake up for work the next morning.

When I arrived, a band with an eclectic black woman with a shaved head screaming at the top of her lungs as the front man, or front woman rather, was performing. I knew I had to find a quiet enough place to get to know her.

I got a chance to speak to Denitra, the lead singer for Conkrete God, in the sound check area towards the back of the venue. I wanted to ask her about how style and being an all-black rock band reflects their music. The band has only been together since September of 2016 but their great chemistry makes it seem like it has been years. The name comes from Conkrete representing their hard-hitting rock and God represents the creative, godly-divine inspiration.

Concerning style, Denitra is definitely most eclectic style persona of the band. Not a trend follower, she likes to start trends. Concerning the men she says, “These dudes are straight rock heads. You’ll find them in jeans with some chains, chucks, funky t-shirts.” The bassist Cool will always have his fedora and the drummer wears kilts from time to time. Just like the style, Denitra says the music is out of the box and different while being an inspiring statement of art.

Though it is rock, there is a soulful aspect to the music as well. I told myself; well I am sure the soulful aspect is due to the fact that the band is all black, so I had to ask, “How do you think being black effects your music?” Denitra stated that music is very political and they have a song titled Black Phoenix about police brutality. Even when they have all white venues, the song is performed. They may be uncomfortable for some, but she states it is needed. “If we can’t cause change in the world, what’s the point of being?”

The band has several shows coming up with dates available on their social media accounts, which is Conkrete God on every social media platform. 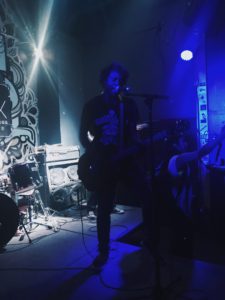 As the night progressed, I got to hear music by The Story Continues, a band from Macon, GA who was performing at the venue for the first time. Led by a black lead singer, the band had a very hard rock/screamo sound attached to them.

Finally, I got to listen to Honey Hips, a band that had two singers, a trumpet player, and a tape recorder. Talk about a production. They had a soft rock/indie sound and they were the band lucky enough to win the competition that night. Congrats to all the bands. I had a rocking time. 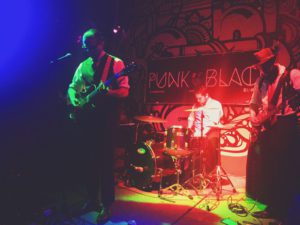