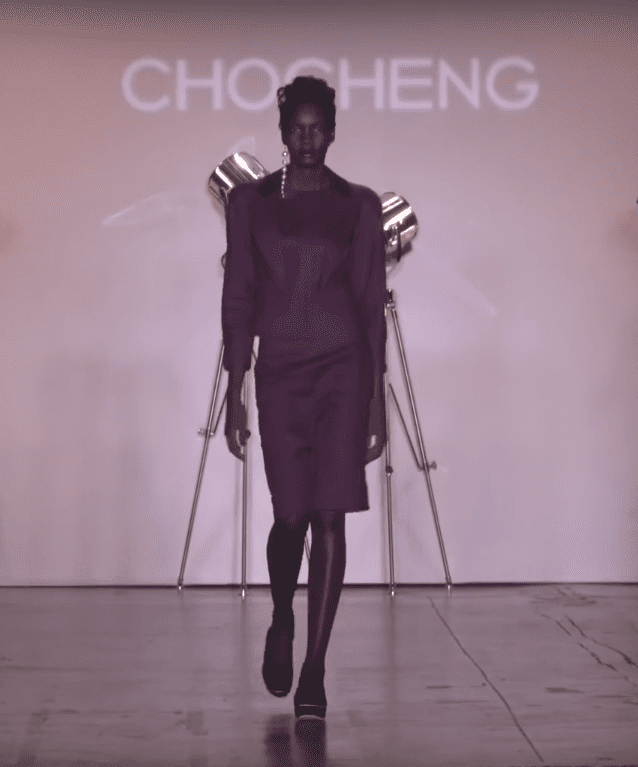 If you were in New York City on February 11th, you were either swathed in a persistent mist or, if you were unlucky, doused by an unrelenting rain.  The crowd that huddled outside of 775 Washington St., anticipating the CHOCHENG Fall/Winter 2018 collection, was the former.

On the sectioned-off sidewalk, we were a jumble of coats and beanies, lucky to endure the lesser of two weather evils.  The occasional glimpse of bare skin on a rebellious arm or leg suggested that weather was not enough to dampen the enthusiasm for one of the premier weeks of fashion worldwide.  The CHOCHENG Fall/Winter 2018 show just so happened to land on the literal peak of Fashion Week, 3 days after it had begun, and 4 days before it was over — and figuratively, it would become the peak of mine.

When we finally escaped the hazy mist, we were ushered into a crisp, white studio housing a runway fitted with ‘50s-esque glamour.  Well, 1958 glamour to be exact.  Appropriately titled, CHOCHENG’s “Mame” Fall/Winter 2018 collection was inspired by the 1958 American movie classic, Auntie Mame.  What does being inspired by Auntie Mame look like?  It means orchids, equestrian jackets, silk tulle, Scottish cashmere, and glass beads — all of which are only a handful of themes detailed in the three-page flyers dispersed throughout the studio. 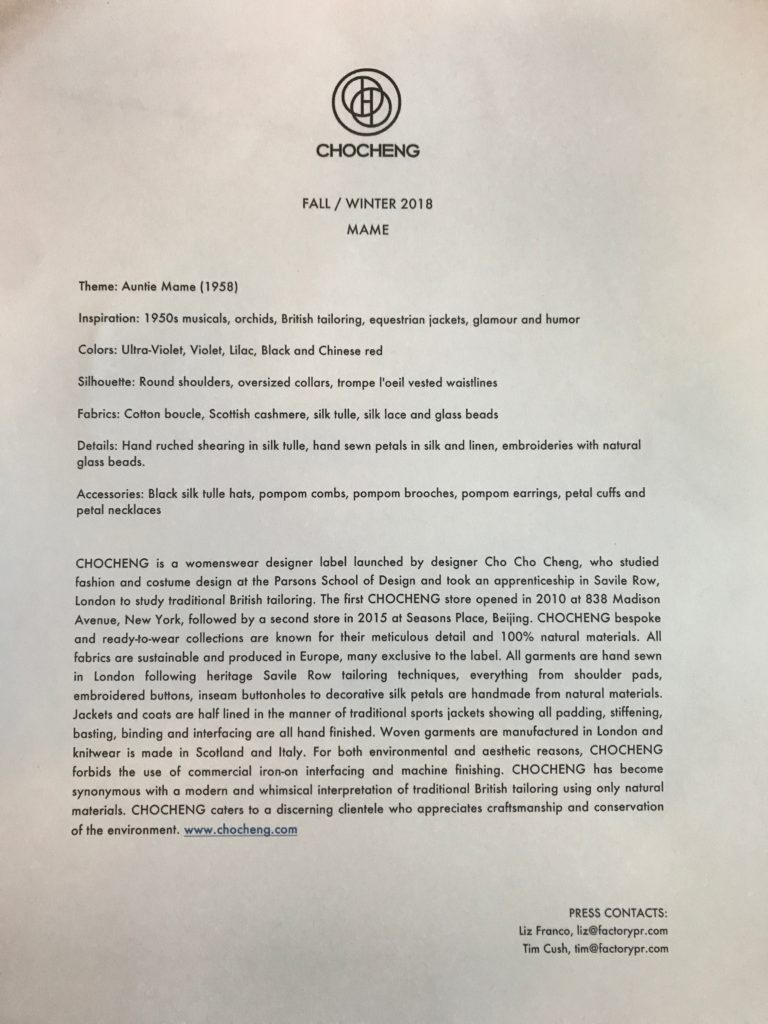 The milling crowd found their seats, which prompted the lights and the lively jazz music to fade in unison.  Silence lingered for only a moment before giving way to a roaring fanfare.  Blaring horns were accompanied by a flurry of spotlights that danced around the room, flitting across a number of enthralled faces.  The introductory bravado then came to an abrupt end and after a beat of silence, the familiar runway lights flicked on overhead, and the show began.

The first model strode out in a matching boucle jacket and skirt.  The outfit was almost exclusively purple, save for the black pom pom brooch made of hand sewn silk petals.  The collection continued with this color scheme for the next few ensembles, before seamlessly transitioning into various hues of black, red, and white.  The designs were flouncy, fun, and elegant, and the last outfit of the show managed to top it all — a black silk tulle gown with hand sewn detailing. 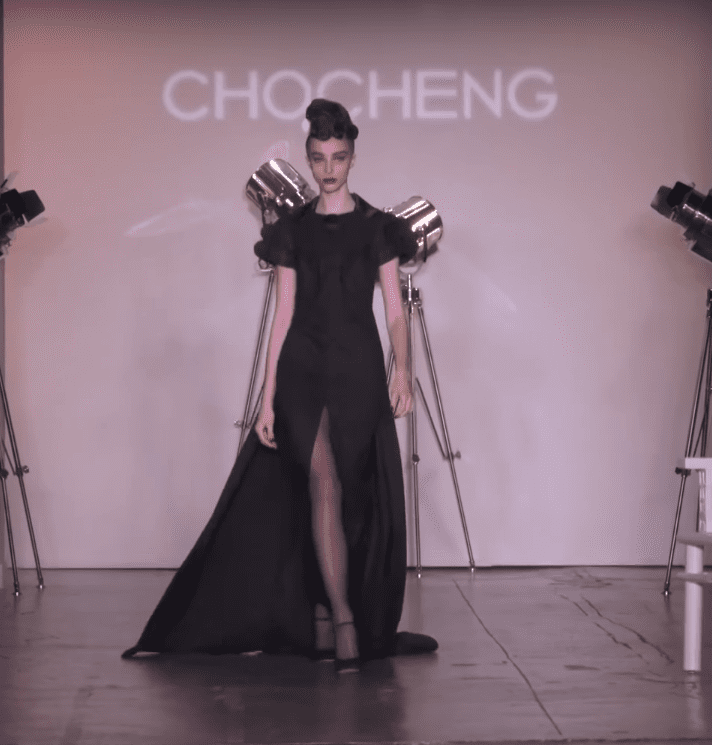 The collection had a Gatsby-esque refinement and similar to the modern iteration of this movie, “Mame” reflected a fusion of nostalgic leisure and modern celerity.  It’s a balance not easy to achieve, and it was one achieved not alone.  Kevin Edwards provided the runway music that, paired with the design’s visual impact, made the collection a completely visceral experience.  He is no stranger to the scene and has provided the industry with music for a number of years — and Donna Karan, for 23 of them.  Other notable clients include Tracey Reese, Zang Toi, B Michael, Pamella Roland, Joanna Mastroianni, and Betsey Johnson.  For this collection, the music and outfits alike were rooted in ‘50s swing, and a modern edge brought them to life.

And as quickly as it had begun, the show ended.  The crowd stood, either to resume their mulling or to dash off to their next event.  Outside, the same mist hung in the air.  But having spent the last half an hour immersed in a world of old glamour, the night felt more enchanting.  I walked the cobblestones of Greenwich Village alongside the throngs of those who had just been in that world, too.  Some hurried off to another fashion show, some to one after-party or another — I broke away toward home to preserve the night’s magic by putting pen to paper.

If you missed CHOCHENG’s Fall/Winter ‘18 runway show, don’t worry  — luckily, Fashion Feed published it!  You can watch it here.