It’s no secret that the NFL is a staunch supporter of the Black Lives Matter (BLM) movement and with the first two weeks of games coming to close, it’s apparent that their support is here to stay. Players helmets adorned with messages of inspiration like “Vote” or “Black Lives Matter”, and or the names of countless victims, like Breonna Taylor lost to police brutality in order

Those who are against the movement of Black Lives Matter have shown their distaste toward the decals, as if it’s taken away from the game, like the boos heard throughout the Kansas City Chiefs first game of the season as players stood with arms linked in protest. And while some are acting out against the call to action, it seems the majority of players and fans have displayed their support for the decision.

Athletes like Matthew Stafford from the Detroit Lions, Odell Beckham Jr. (OBJ) from the Cleveland Browns, and many more are speaking out as to why the inclusion of phrases and victims is so important to the overall message of BLM. Stafford tweeted, “ 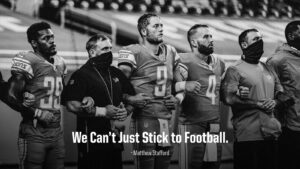 We can’t just stick to football.” While OBJ designed pregame shirts for their face off against the Cincinnati Bengals last week with a simple message to “Vote.”

Although the league is composed of players that are predominantly black, the NFL has only recently changed their tune on the matters at hand. 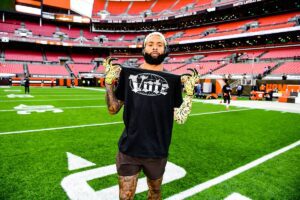 After Colin Kaepernick knelt in 2016 during the national anthem in protest of racial inequality and police brutality, the NFL was a hard and fast rejector of his actions and it is said that his abilities in the years after were often overlooked as a result.

However, this past summer of 2020, Roger Goodell, the NFL commissioner, issued a statement via Twitter saying, “We, the NFL, admit we were wrong.” Continuing the video to say, “ encourage all to speak out and peacefully protest.” For more from Goodell himself, click the link below.

We, the NFL, condemn racism and the systematic oppression of Black People. We, the NFL, admit we were wrong for not listening to NFL players earlier and encourage all to speak out and peacefully protest. We, the NFL, believe Black Lives Matter. #InspireChange pic.twitter.com/ENWQP8A0sv

The BLM movement goes beyond football and sports in general, but when an issue lacks any sort of response, then why wouldn’t athletes take to their platforms to demand change? It’s a question that doesn’t need to be answered, and certainly many players aren’t looking to either. So, when tuning into these games it’s vital to remember: yes, it’s OK to enjoy the game, but we must not forget the real issues plaguing our society and look inward at how we can make a statement just like those decals on their helmets. It’s small acts of change, but it matters: Black Lives Matter.

Empty Stadiums And Arenas Are Put To Good Use