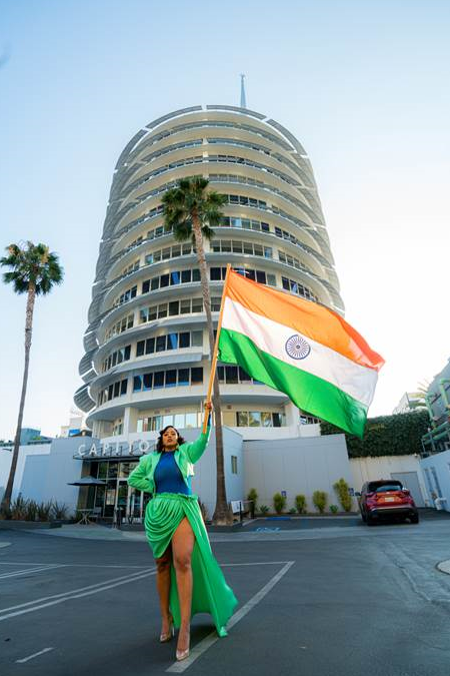 Born in California to Indian parents who emigrated to the U.S. in the 1970s, Raja Kumari is a GRAMMY-nominated rapper, dancer, and singer-songwriter. Kumari unveils her new single “Firestarter,” which was released via Mass Appeal India in partnership with Capitol Records.

The record mixes trap beats with Indian classical music, continuing Raja’s mission to trailblaze a musical connection between the East and the West. The “Firestarter” video is directed by MTV VMA 2020 titleholder Michael Garcia.

Kumari has been on a relentless mission to create art that blends her Indian roots with her American upbringing, with standout tracks that fuse the rhythms she absorbed as a trained classical Indian dancer with her passion for hip-hop.

Kumari’s unswerving alchemy has earned her a plum position as a powerful female voice in the modern hip-hop landscape, and ‘Firestarter’ reminds us that she’s conquering regardless of those who try to censor her artistry. Recorded in the thick of the pandemic, ‘Firestarter’ reinforces how Kumari has galvanized popular music by belting grandiose vocal runs of self-love, inclusivity, and gender equality.

Emerging as a disruptive force in hip-hop, Raja Kumari received a songwriter award at the BMI Pop Awards and is the host and curator of her own Apple Music Beats 1 show, The New India, where she spotlights some of India’s brightest new talents.

Kumari is a series judge and mentor on MTV Hustle, India’s first rap-reality show, a global face of MAC Cosmetics, and the first female rapper to be signed to Mass Appeal India. Indo-American Kumari has been sought out for collaborations with Gwen Stefani, Iggy Azalea, Fifth Harmony, Knife Party, Fall Out Boy, and more.

Speaking about her new release Raja Kumari expands, “After the last 16 months that we spent in the pandemic it was important for me to put out something that represented what I was going through. I just love how universal the record is and how it’s for everyone. The song represents being reborn and rising from the ashes like a phoenix and the need to constantly reinvent yourself and not being fearful about it. This is my 25th music video and I have accepted now that it’s my job to make these visual pieces of musical art. It’s been almost two years since I’ve been on the set, specifically for my own independent music video, where it’s about fashion and production. This is the first time that I didn’t take the whole creation process too seriously as I wanted it to be fun and free-flowing.”