M. Night Shyamalan Opens Up About his New Movie “Old”, in Theaters July 23 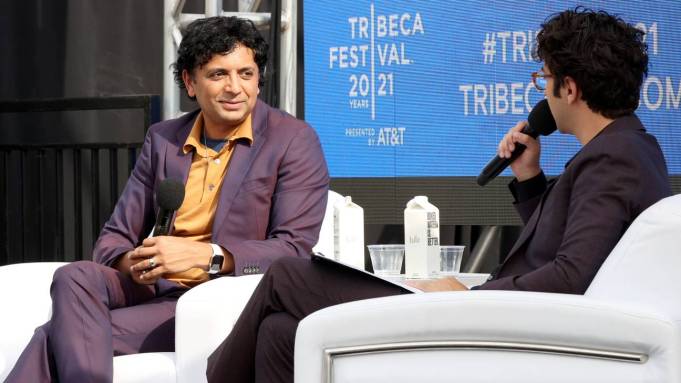 M. Night Shyamalan Opens Up About his New Movie “Old”, in Theaters July 23

Night Shyamalan’s newest thriller, Old, is coming to theaters this Friday, July 23. This film marks Shyamalan’s comeback to moviemaking since 2019’s Glass, which completed the trilogy beginning with Unbreakable and Split.

The inspiration from Old comes from Frederik Peeters and Pierre Oscar Lévy’s graphic novel Sandcastle and follows a family on vacation who discover the hard way that their secluded beach causes them to age rapidly, reducing their entire lives into a matter of hours. Starring Eliza Scanlen, Thomasin McKenzie, Gael Garcia Bernal, Alex Wolff, Vicky Krieps, and more, Old is expected, by Shyamalan’s own words, to offer moviegoers something they’ve never seen before.

Tribeca Film Festival 2021 saw Shyamalan take the stage alongside Old star Alex Wolff to discuss his upcoming feature. The 60-minute conversation was shrouded in ambiguity and intrigue. Most notably, Shyamalan admitted that the movie isn’t quite finished yet, despite its release date in less than a week. He explained, “I’m deciding on the minor note; how to end on a minor note.” The legendary director known for his twist endings has said that he was inspired by his own father and aging loved ones.

“My father’s very old right now. He has dementia. He comes and goes. And the kids are now directing and singing concerts and, you know, when did this happen? So, I made a movie about that feeling” The process of filming this movie was no small feat during the COVID-19 pandemic. Shyamalan recalled, “We all went to the Dominican [Republic], and at that time, the way we were making the movie was very new. I was making up rules because I was the first one, so I said, ‘We’re all gonna stay in this hotel. I’m gonna pay for everybody’—the cleaning ladies, the caterers, everyone, the reception person, the person parking our cars, everybody staying with us—and if they commit to these 10 weeks, I’ll cover everything and we just go from the hotel to the beach, back and forth, every day.”

This approach served the crew well, as the crew didn’t have a single positive COVID case the entire shoot. The bigger threat turned out to be the set itself. Hurricane season was in full swing, but because of conflicting schedules, this specific cast would not have been available at any other time. Unfortunately, a storm destroyed the sets halfway through filming, and the crew was tasked with rebuilding everything. However, Shyamalan revealed, “The beach had been eroded away. There was no beach for our beach movie.”

Luckily, the beach slowly returned. They shot at the behest of nature, coordinating with the tides and incoming storms. Ultimately, there was just enough time and peaceful weather that the film could be completed. “Honestly, we were allowed to be on that beach. That was Mother Nature allowing us to be there. We had 40, I don’t know, 40 days where we needed good weather—we got 40 days of good weather,” Shyamalan mused.

Wolff recalled that on the last day of shooting, the cast and crew paid their respects to the beach with a ceremony celebrated by the locals. “We did this one ritual at the end. I was like, ‘God, I don’t know any other filmmaker who would take the space so seriously to go and drop off flowers in the ocean.’” Otherwise clamming up about Shyamalan’s newest film, he said only “Get ready” for Old.