IMG is pleased to announce the preliminary schedule for New York Fashion Week: The Shows, taking place February 6 – 13, 2019, at Spring Studios, with additional shows at Industria. Please find full details below and attached. 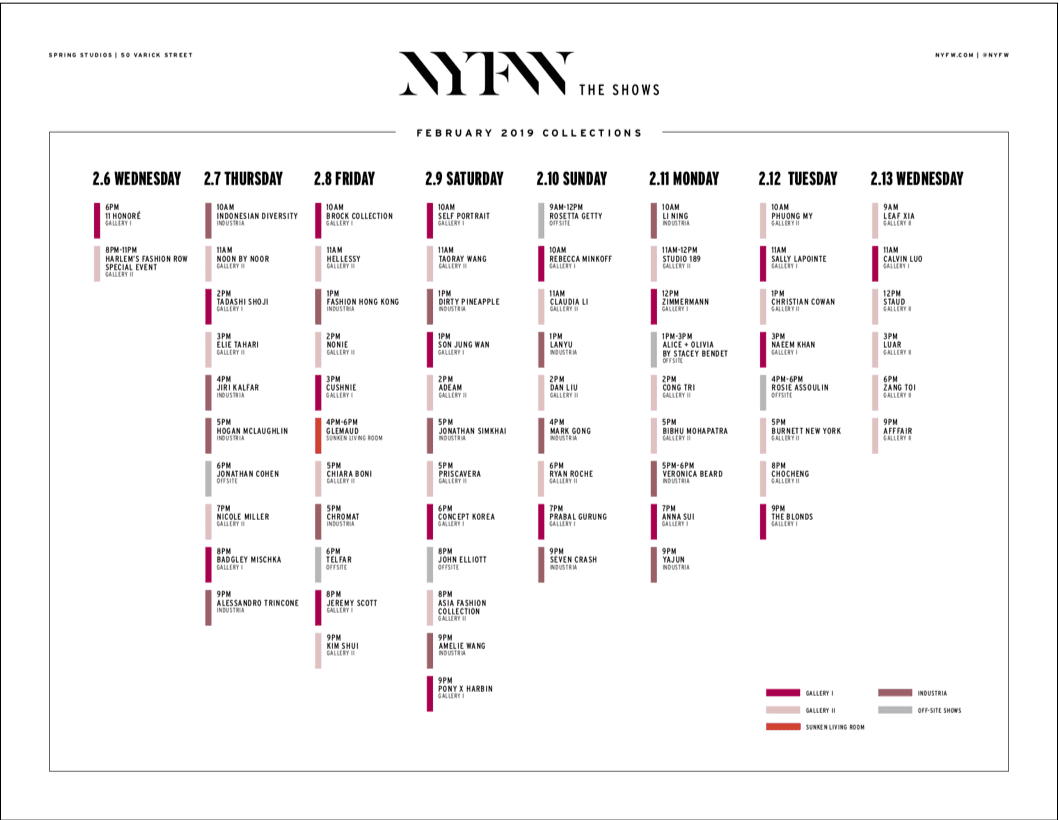 IMG’s preliminary schedule will appear on NYFW.com NYFW.com at 4pm ET today, January 10. You can visit NYFW.com and @NYFW across Instagram, Twitter and Facebook for continued schedule updates, exclusive designer content and more, leading into February 2019 and throughout the year.

Background Info: Designers who are NEW to NYFW: The Shows:

11 Honoré – A luxury size-inclusive online shopping site that, for the first time ever, gives more women the option to experience the best designer clothing and celebrate and honor their bodies. The retailer, started by Patrick Herning and Kathryn Retzer, has been adamant about building a luxury brand and bringing in the best designers they could. Designers include Prabal Gurung, Altuzarra, Zac Posen, Monique Lhullier, Marc Jacobs, Brandon Maxwell, Derek Lam, Theory and more.

ADEAM – Japanese born, Hanako Maeda is the Creative Director of ADEAM. Spending her time between Tokyo and New York City, she grew up surrounded in fashion through her parents’ fashion brand, FOXEY and later studying at Columbia University where she quickly developed a love for art and design. She launched her own fashion label, ADEAM which debuted at New York Fashion Week during the Autumn/Winter 2013 season. Since then, ADEAM has rapidly expanded its retail, editorial and red carpet presence gaining outstanding recognition and support from top magazines, celebrities and VIPs, and retailers globally including its three boutiques in Japan, global online retail platforms Moda Operandi and Net-A-Porter, and in coveted boutiques including Forty Five Ten, Neapolitan, and Fivestory. ADEAM has continued to evolve and build its name throughout the fashion industry expanding into the accessories market as well as collaborating with partners Hanako feels a strong connection with including: the New York City Ballet whom she was asked to design the costumes for their Fall Gala in 2015, Net-a-Porter where ADEAM collaborated on an exclusive room wear capsule collection and Bergdorf Goodman where ADEAM has been invited to present her collections at pop-up shops. In 2017, ADEAM celebrated its 5-year anniversary. With a deep connection to her hometowns of Tokyo and New York, Hanako fuses the two cities of her upbringing along with her love for the arts, travelling, food and architecture into her collections that are synonymous with her passions. Hanako takes the juxtaposition between traditional Japanese techniques and modern silhouettes that align with a modern and spirited sensibility that is ADEAM.

Alessandro Trincone – An emerging Italian fashion designer who prides himself on a genderless collection. He’s primarily focused on men, but will be introducing women this season. He has shown the past few seasons on the men’s schedule with the CFDA. He dressed Young Thug for the cover of “No My Name Is Jeffrey”.

Burnett New York – Designer Emily Burnett just launched her line of ready-to-wear, cocktail dresses and evening wear for pre-fall. Burnett was formerly at Dennis Basso where she served as the brand’s Creative Director for 10 years. She’s teamed up with Sterling McDavid as her business partner to launch Burnett New York, a female-led and founded business. This will be the first time Burnett New York will debut on the runway.

Cong Tri – One of the most established Vietnamese designers, Nguyen Cong Tri, launched his ready-to-wear brand, King by Cong Tri, in 2009, and KinConcept, his menswear line, in 2011. In 2013, he became the first Vietnamese designer to launch a dedicated house of Haute Couture. His handmade garments are easily identifiable due to their traditional aesthetic, imbued with an international contemporary spirit. He is known for his progressive techniques including laser cutting, interlacing, hand-ironed pleating with a particular emphasis on jewel and sequin embellishments and has worked with many celebrities including Katy Perry. This will be his first time debuting his collection in New York during NYFW: The Shows.

Elie Tahari – Iranian-Israeli fashion designer based in New York, known for his ready-to-wear and fashion accessories, who has been in business for 45 years. The internationally-renowned brand has a global presence on five continents and is sold in more than 600 stores in over 40 countries. This marks his return to the runway at NYFW: The Shows.

Harlem’s Fashion Row [Special Event] – An opening night event and immersive fashion installation celebrating an icon in American film, brought to life through a collaborative effort that will support emerging designers and fashion talent of color.

Kim Shui – New York-based contemporary womenswear brand founded in 2016 by namesake designer, Kim Shui. Shui is a Chinese designer born in the U.S. who is all about depicting an inclusive image of femininity and creating and a culture where people aren’t afraid of diverging from the social norm. Kim was named to the Forbes 30 Under 30 List for 2019.

Luar – New York-based designer Raul Lopez, who launched his own brand, Luar. The brand defies gender binaries and counts Rihanna as a fan. As a founding member of Hood By Air, he created an aesthetic that is completely limitless – as in unbound by gender, time or place. He was a CFDA/Vogue Fashion Fund finalist in 2018.

Phuong My – Born in 1988, creative director Phuong My may have only established her brand in 2013 but she has been featured in Vogue Italia, British Vogue and many more international publications, thanks to impeccable tailoring, striking silhouettes and beautiful feminine details. Already a darling in the Viet Nam fashion scene, her designs for PHUONG MY have been well received globally, especially in Singapore, China and the Middle East. In 2015, designer Phuong My was chosen to open Viet Nam International Fashion Week. In 2016, for the first time held in Hanoi, designer Phuong My was chosen to close Viet Nam International Fashion Week. In 2017, Phuong My became the first and only designer from Viet Nam to showcase her Spring Summer 2018 collection at the Arab Fashion Week in Dubai, where she was joined by members of the royal families in the Middle East. Each season, PHUONG MY presents new collection dedicated to separate themes honoring beauty of Asian women who are known for their talent, enthusiasm, feminine beauty, subtlety but also strong will. Designer Phuong My is well-known for her signature silhouette featuring hour glass, cocoon shape in the lower parts of dresses that highlight the beauty of women’s shape. Luxury materials are hand-selected from prestigious textile mills in Hong Kong, Korea, Japan, Italy and France to ensure the highest quality and perfection.

Ryan Roche – Designer who creates clean, minimalist modern romance for women. She is known for her harmonious relationship to color, subtle feminine shades and luxurious textures, inherent to each collection. She’s committed to supporting responsible manufacturing via sustainable, low-impact production. She was a CFDA Vogue Fashion Fund finalist in 2014.

Staud – Womenswear brand founded in downtown Los Angeles in 2015 by Sarah Staudinger and George Augusto. Staud was founded on a commitment to producing accessible, yet innovative, pieces for the contemporary woman. The brands is known for their modern classics and refined pieces that reflect an eye toward the future and nostalgia for old-school elegance. This is Staud’s second time showing during NYFW, and its first showing at NYFW: The Shows’ central venue.

Studio 189 – Rosario Dawson and Abrima Erwiah co-founded Studio One Eighty Nine as an agent for social change. The luxury fashion label’s collections are made in Africa by skilled artisan that celebrate traditional crafts.