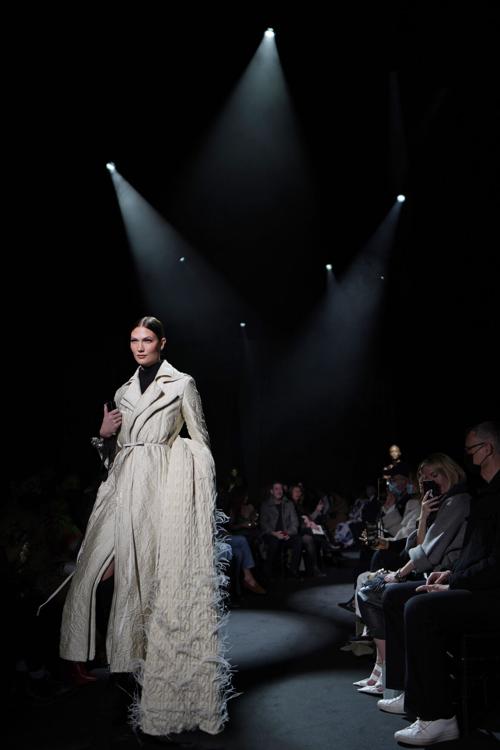 New York — To love someone who is fading away creates a shift — leaving one in a permanent limbo between enjoying their last moments to grieving someone who is still there. This is a painful reality to some and one that Brandon Maxwell knows well.  He paid an emotional tribute to his grandmother, who suffers from Alzheimers, with his fall 2022 ready-to-wear collection.

The show opened with a video montage that asked the question “Who is Brandon Maxwell?” Siri read his Wikipedia page, with photos and videos of family, friends, and his Mammaw’s voice poignantly asking, “We had a good time, didn’t we?”

Maxwell spent much of his youth in her clothing boutique in Longview, Texas. “She’s a big part of my life. I was going back to when I was a kid. While she was cooking I’d be in the back room taking blankets and wrapping them around my sister, emptying out her jewelry box, and making my sister carry one of her bags. When we decided to do a show, I wanted to make something that, if it was my last one, it would be a bookend that I was proud of,” Maxwell said in a preview.

The Brandon Maxwell brand is sophisticated and timeless — slick. “I’ve done a lot of shows where I was thinking about the process of what everybody else would think. And this was probably the first one where I did not consider it,” Maxwell said after the show. “We go on this road of going, going, moving forward. In the end, we are lucky if we have one person that really just sits by the bedside with us.”

The Fall/Winter collection closed on a floral print that was originally designed by Maxwell’s grandfather as a part of “a literal valentine”. The Texas-born designer decided to focus on antique jewelry, clutch bags, and blanket shawls. There were fisherman sweaters and satin maxi skirts with oversized chenille stitches and rich brown textiles.

Models walked to Brandi Carlile’s cover of John Denver’s ‘Take Me Home, Country Roads” — dressed in corset tops and bodice dresses. It paid homage to his childhood in a dusty Texas palette, reflecting familial love and joyful living through melancholy.

There was a small card on everyone’s seat that noted a donation was made in each attendee’s name to the Alzheimer’s Association. Maxwell, at the end of the show, grabbed his grandfather from the front row for his walk. Maxwell’s voice was heard, asking her what she wanted him to remember most about their relationship. “Just remember how much I loved you,” she responded.

In 1956, a shoe salesman met a young woman by chance. They were married two weeks later. They both loved family and the business of fashion, so they made their own.  In the early days, she would travel from city to city by his side helping to sell those shoes that would build their home, and in the later days, he would sit transcribing at the kitchen table the dress orders for her clients that would sustain them. Somewhere in between, their family made their own families; they went from Mom and Dad to Mammaw and Pappaw, and in that little home overflowing with love on Groveland Avenue, we all became who we are.

The school of Mammaw was one of hands-on discovery. I found my way to her closet of treasures, the same way. I found my way to those pictures of her and her sisters in all their 1950s glamour. The world in those pictures folded seamlessly into my own styling vernacular at the time: bed sheet and blanket ball gowns accessories with her emptied-out jewelry boxes. Mammaw’s clothes, and those in the store she managed, taught me forms that I wanted to take further. I liked this idea so much that I made it my life’s work.

Now I have the privilege of dressing women of all ages and backgrounds and still it is always Mammaw’s approval that I seek. When I try to dazzle her with the theater of the runway, she only has eyes for my seams — (typical of someone who pursued a life adjusting them). Sometimes it feels like they are the most important lines between us. Because when communication gets harder, clothes step in as a telephone, a way to dial into a shared frequency. Recently, when we get together, we hardly talk at all. The show goes on in our eyes.

Over the past years, I’ve struggled with the reality of losing shared threads, I’ve never considered memory’s ability to keep us close. This season required me to summon the past to move forward. To this end, the FW22 collection is an exercise in confrontation, acceptance, reverence and legacy. The finale is a literal valentine. It is a painting lifted from a letter from a shoe salesman to his bride. It pays homage to 65 years of love and the seams that hold it together.