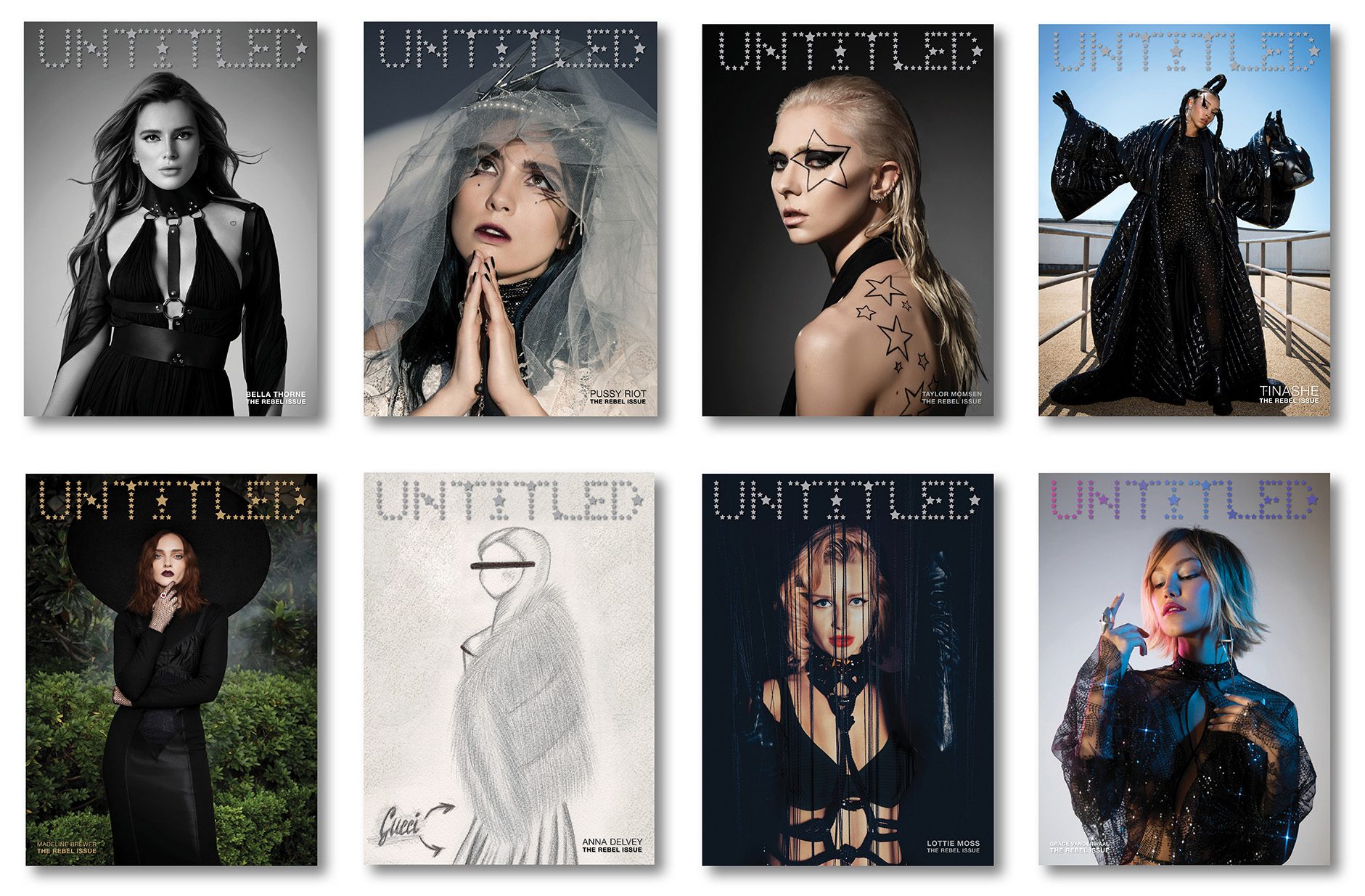 “When I started working on ‘The REBEL Issue,’ I asked myself, ‘What makes a rebel in 2022?’ Over the last six months, we scoured the planet in search of the most inspiring, controversial, and talked-about living rebels. Putting together an entire issue of the most badass, rebellious humans on the planet was no easy feat. This has probably been the most challenging issue to produce to date, but I can honestly say that it is also one of our best since we launched our globally distributed collector’s print issues in 2012. Not only is this our 10th Anniversary edition, but it is also lucky issue number 13 – which couldn’t be better suited to the REBEL theme.” – Editor-in-Chief Indira Cesarine

One of the first productions for “The REBEL Issue” was with the intensely captivating Nadya Tolokonnikova of Pussy Riot, perhaps the crown of contemporary rebels, who was photographed on the day of her UkraineDAO NFT drop for the issue’s first cover. It was impressive to watch her in action as she literally raised over $7 million for Ukraine relief in between shots for the magazine. Tolokonnikova isn’t the only revolutionary featured in the issue. Editor-in-Chief Indira Cesarine sat down for an intimate conversation with a former leader of the Black Panther Party, Ericka Huggins, who shared with the publication details about her groundbreaking work as party leader as well as insights into her latest book Comrade Sisters, a photographic journey of the party’s pivotal women.

For “The REBEL Issue,” The Untitled Magazine flew to Los Angeles to work with a number of iconic, rebellious women from the world of entertainment, including the stunning multi-hyphenate Bella Thorne, who shares details of her latest projects on and off the silver screen. The publication headed to the landmark Chateau Colline in the City of Angels to photograph actress Madeline Brewer of The Handmaid’s Tale and channeled retro inspiration for a photo series featuring Chandler Kinney of Pretty Little Liars: Original Sin.

Additional talent from stage and screen includes actress Sophia Anne Caruso, who joined Untitled for a shoot at The Untitled Space in New York City and shares insight about her forthcoming film The School for Good and Evil. In London, we chatted with rising actress Dafne Keen, and Jemima Marriott photographed up-and-comers Ben Radcliffe, Tom Glynn-Carney, and Nathaniel Curtis, who shares the nerve-wracking experience of his debut role in the groundbreaking It’s a Sin.

From the world of music, “The REBEL Issue” features superstar singer Tinashe, who graces the magazine with a 10-page exclusive that includes a futuristic photo series and an interview on her latest album 333 Deluxe. The Pretty Reckless frontwoman Taylor Momsen, who also covered The Untitled Magazine’s “Music Issue” in 2013, is a seamless fit for “The REBEL Issue.” At the peak of her acting career, she gave it all up for her dreams of rock and roll and literally embodies the true spirit of a rebel. Singer/songwriter Grace VanderWaal draws back the curtain on growing up in the spotlight, while pop artists KO aka Koala and GIRLI get intimate about their plans for the future. Singer Sizzy Rocket aptly encourages everyone to rise up for the “Rebel Revolution,” and “fashion art band” Palaye Royale show exactly why they take on that title with their series by Jeaneen Lund.

On the fashion front, Nick Rhodes of Duran Duran got behind the lens in London to photograph the luscious Lottie Moss, who left her career as a top model to shake things up as a content creator on OnlyFans. Photographer Simon Emmett captured unconventional beauty Sophia Hadjipanteli, who is making waves with her viral #UnibrowMovement. In New York City, Untitled hit the streets for several fashion stories, including Fine Young Rebels by fashion editor Tony Jones, and New Gen, a photo series by Indira Cesarine featuring the unique models of We Speak agency styled by Ty-Ron Mayes. Musician/fashion muse Ash Stymest tears up Los Angeles in a number of rebellious looks by the likes of Maison Martin Margiela and Junya Watanabe. Photographer Daniela Federici treated us to a wicked series featuring the one-and-only drag queen phenomenon Sasha Velour, who chatted with Untitled’s Features Editor Jason Daniel Levy about how political and rebellious drag inherently is.

“The REBEL Issue” features over 30 contemporary artists from all corners of the world who are challenging the status quo with their progressive artwork, including interviews with the mysterious Miss Meatface, vivid photographer Parker Day, and surrealist Petite Doll. Artist Fahren Feingold painted an ethereal series inspired by historic fashion rebels, including Vivienne Westwood, Issey Miyake, Thierry Mugler, and Alexander McQueen.

Last but not least, the controversial socialite-turned-artist Anna Delvey dialed in from behind bars for an exclusive candid interview sharing her take on the media, prison reform, and insight into her exhibitions and artwork created while in detainment. She also created a unique graphite on paper artwork for The Untitled Magazine’s “REBEL Issue,” boldly titled “No Regrets,” which will premiere in The REBEL Exhibition at The Untitled Space. The artwork will be on view throughout the month of October 2022 alongside over 60 works by other contemporary artists featured in the issue.