According to the Royal Family’s official Instagram post regarding the wedding, Beatrice’s gown and tiara were lent by Queen Elizabeth. Although it’s not a secret that most Royal Family members borrow tiaras for their wedding or important events, it’s the first time that the wedding gown is provided by the Queen.

Princess Beatrice’s wedding gown is a vintage design from Norman Hartnell, circa 1950s. Norman Hartnell is one of Queen Elizabeth’s favorite designers who also designed her wedding gown. In 1962, the Queen wore the exact same gown to attend the film premiere of Lawrence of Arabia. Thanks to Princess Beatrice, we can once again witness the beauty of that timeless design.

The Norman Hartnell gown is made of elegant ivory taffeta, with classic 50s A line silhouette, the hem of the skirt is gathered to form a bubble. The front bodice has rhinestones arranged in geometric shapes and lines which extend down along the folds of the skirt, like dripping crystals. In order to comply with the Royal Family’s wedding dress code and to better suit Princess Beatrice’s style, the Queen’s personal stylist Angela Kelly altered the gown. She replaced the spaghetti straps with organza puff sleeves following the fashion trends, and also shortened the hem which made the gown appear chic. 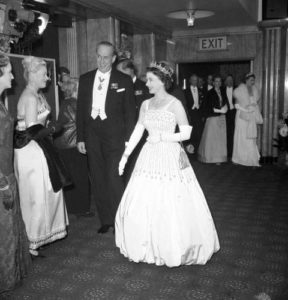 Princess Beatrice’s tiara is called the Queen Mary Diamond Fringe Tiara, crafted by British jewelers Garrard & Co. Like many royal tiaras, this tiara belonged to the Queen’s grandmother, Queen Mary. It was originally a diamond necklace gifted to Mary by Queen Victoria to fashion the fringe design, Queen Mary had it altered into a tiara. She then passed it on to her daughter Queen Elizabeth. When Princess Elizabeth married Prince Phillip in 1947, this was also the tiara of her choice. On the day of her wedding, the tiara suddenly snapped in the middle. “Determined to wear this tiara on her special day, the princess’s tiara was rushed away by a police escort to the Garrard workshop, where it was repaired in haste and returned just in time for the ceremony,” recalls the House of Garrard on its website. If you look closely at the Queen’s wedding photos, there is a crack in the middle of the tiara due to the limited time given to the jewelers for the repair. The Fringe tiara was also worn by Princess Anne in 1973 but hasn’t appeared anymore until Princess Beatrice’s wedding. 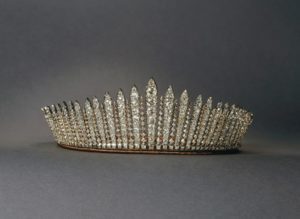 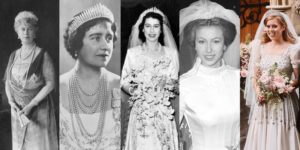 Compared to other Royal brides’ luxurious couture gowns and almost lavish wedding celebrations, Beatrice’s borrowed wedding attire seems quite shabby. However, she is also the only princess who had the privilege to use the Queen’s vintage gown for her wedding. Beatrice’s wedding pays tribute to Queen Elizabeth, it also contains the Queen’s love and support for the newlywed couple, which makes it a ceremony to cherish forever. 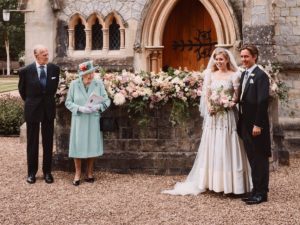 The Queen and Prince Phillip takes a photo with the newlywed couple within social safety distance. Photographed by Benjamin Wheeler.

Museum of Graffiti Presents – The Fabric of America: Artists in Protest

How To Achieve The Off-Duty Model Look

The Moschino x H&M Look Book is Out