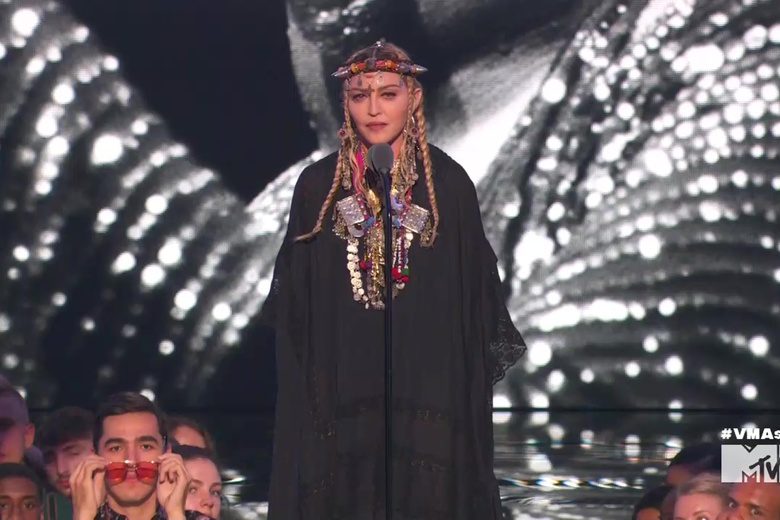 At 1:53 p.m. today, Madonna clarified her Aretha Franklin tribute at the VMAs after going through so much backlash for speaking about herself more than the legend. The pop star explained on Instagram this afternoon:

Here are some responses from people in regards to Madonna’s tribute to Aretha Franklin.

When Madonna is supposed to be honoring Aretha Franklin but goes on about her self for 10 mins straight #VMAs pic.twitter.com/Br6I8dknxb

Madonna made Aretha Franklin's death about herself and her own musical journey, and honestly, this is some of the whitest shit I have ever seen. #VMAs

Me: It's weird that #Madonna is doing a tribute to Aretha Franklin, but what's the worst that could happen?

Are you fucking kidding me?!?! WHOEVER LET THAT WHITE WOMAN WITH A GRILL GET UP THERE AND TALK ABOUT HERSELF LIKE A FOOL SHOULD BE SMACKED IN THE FACE WITH A FROZEN STEAK!! THAT WAS A COMPLETE DISGRACE TO ARETHA!!! Ugh. Whyyy Madonna?! WHY?!?!

Did Madonna make her Aretha Tribute about Madonna with a sprinkle of Aretha's name in it??

Aretha watching Madonna’s tribute to her from heaven …. pic.twitter.com/fuMkCCf1AT

Not only did she receive major backlash from the tribute, but she also received some from her outfit. Fans, really let Madonna have it for this year’s VMA’s.

#VMAs #Madonna
Did she pay hair & makeup and a "stylist" for this? Did she collide with a wind chime? I don't get it. pic.twitter.com/2wfojmoniY

This was the speech that Madonna made that caused so much backlash.

“I left Detroit when I was 18,” she continued, mentioning Franklin’s hometown. “Thirty-five dollars in my pocket. My dream was to make it as a professional dancer. After years of struggling and being broke, I decided to go to auditions for musical theater. I heard the pay was better. I had no training or dreams ever ever becoming a singer, but I went for it.”

“So. You are probably all wondering why I am telling you this story,” Madonna said at the end of the tribute. “There is a connection, because none of this would have happened, could have happened, without our lady of soul. She led me to where I am today. And I know she influenced so many people in this house tonight. In this room tonight. And I want to thank you, Aretha, for empowering all of us. R-e-s-p-e-c-t. Long live the queen.”

More can be seen below of the speech:

#VMAs: The Queen of Pop @Madonna pays tribute to the Queen of Soul, Aretha Franklin: "I want to thank you, Aretha for empowering all of us. R-E-S-P-E-C-T. Long live the queen." pic.twitter.com/ugdxbr48Gz