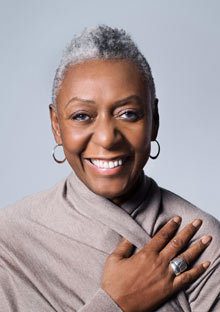 Fashion model, activist and industry leader Bethann Hardison may be known as a groundbreaker in the fashion role, but she is now adding a new line to her resume- actress. Yes, the model and actress is set to have a recurring role in the fourth season of the CW’s “Black Lightning.”

The DC Comics-inspired show will feature Hardison, who is set to play a marriage counselor for the show’s two leads. “I have about six episodes plus. It’s amazing. I’m nervous as hell,” Hardison shared. In fact, the show’s creator Salim Akil sent Hardison a text mentioning he had a role for her.

With a career spanning more than four decades, Hardison is more than just a model or name in the fashion industry; she is a titan credited for help paving the way for models as both a booking agent and agency owner. In 1988, she founded the Black Girls Coalition with Iman to celebrate and to provide a platform and voice to Black models. This community, including names like Naomi Campbell (who even calls her ‘Ma’), Veronica Webb and Karen Alexander, quickly grew into a watchdog group advocating for the support of African-American models working to address the underrepresentation of people of color in advertising, runways shows and editorial fashion magazines.

While the fashion industry is significantly different from when she got her start in the ’60s Garment District, her activism only grew. Hardison now consults and advises for the CFDA (Council of Fashion Designers of America) and is on their Board of Directors, and most recently, becoming Gucci’s Executive Advisor for Global Equity and Cultural Engagement. In an interview with Emmy-Winner Zendaya, Hardison shared for the past two years; she’s been working with young designers of color, helping them build their brands and businesses.

Bethann Hardison serves as an icon for women to break barriers, using her beauty and intelligence to inspire women of all generations. Bethann can continue to connect with women, aside from those who knew her through the modeling world, through her acting role now serving as a guiding figure to a whole new generation of women.

While “Black Lightning” is a new opportunity for the legendary Bethann Hardison, this isn’t her first acting role, appearing in Christine Turner’s 2017 Sundance Film “Hold On.”