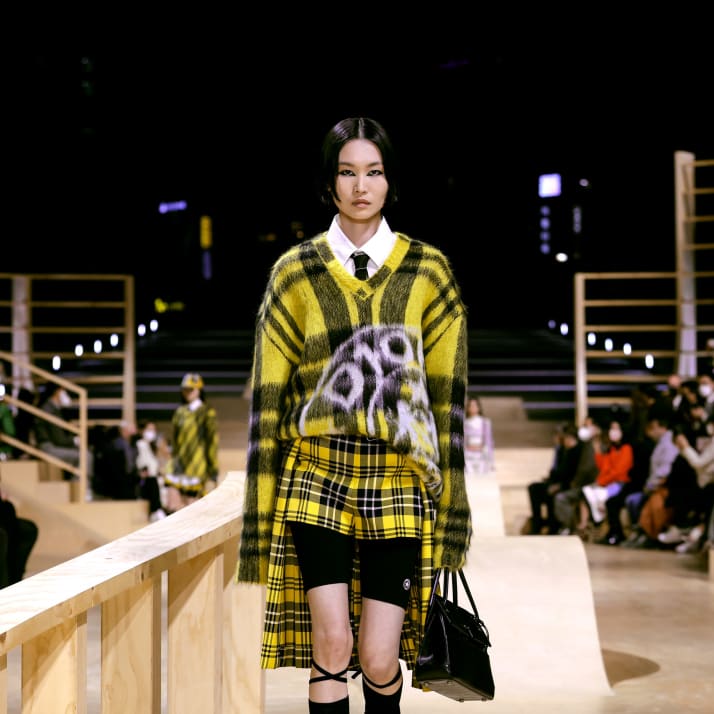 LVMH-owned French luxury house Dior brought its pre-fall 2022 collection to Seoul, staging its runway at the Ewha Womans University. The skatepark inspired runway was the stage for Dior’s first ever show in South Korea.

Prior to the show, chairman and CEO of Christian Dior Couture, Pietro Beccari, said that the label is “forging new powerful ties” with South Korea. In addition to hosting the show at the Ewha Womans University, the company will be partnering with the university as part of Women@Dior, which is a mentoring and education program for students that launched in 2017.

The show was held on Seoul’s Ewha Womans University campus, with Korean female skateboarders both opening and closing the show while doing tricks on ramps on the runway. They were clad in jumpsuits with the Dior business logo, “l’union fait la force” (united we stand), which references Maria Grazia Chiuri’s artistic spirit of sisterhood. The women’s university, chosen by Chuiri, was selected due to its mission of women’s education and gender equality.

To close the show, Chuiri took a bow in the university’s traditional green and white teddy jacket. “When I arrived, I fell completely in love with the jacket. I said I would like to stay here like a student, so I decided to dress myself like it,” she said to students at the university.

The collection featured yellow plaid, sheer tulle, pleated outerwear, blouses, neckties, short skirts, and biker shorts, which Dior described as having “punk overtones.” It intended to put a contemporary spin on traditional school uniforms. Launched in Korean stores prior to launching worldwide on May 5th, the aim was to stage a show for a collection that usually doesn’t get one. At Dior, there has been an executive commitment to physical shows. The upcoming cruise show will be taking place in Seville, Spain on June 16th.

The South Korean luxury market has grown 2.6 percent from 2020 to 2021 and has reached $14.2 billion as of December 2021. Dior has named K-Pop singer Jisoo of Blackpink as its new global embassador for both fashion and beauty. Bain & Company, a consulting firm, has released a 2021 Luxury Goods Worldwide market Study which noted that Korean shoppers are choosing to buy at home instead of overseas and that it has “more than compensated for the lack of tourism” in the country. South Korea is now the seventh largest luxury goods market in the world.

The region is becoming increasingly important for LVMH as coronavirus concerns and restrictions continue in China and Japan. Both Louis Vuitton and Tiffany have have South Korean stars BTS and Blackpink’s Rosé as brand ambassadors. Other stars present at the event were figure skater Kim Yuna and Korean American rapper Jay Park. Other fashion houses have been appointing South Korean stars as brand ambassadors, including Gucci, Loewe, Givenchy, Chanel, Prada, and Alexander McQueen. The country is being viewed as a lab for trends.

Dior has 23 boutiques in South Korea, seven of which are in Seoul’s Gangnam district. After the show, Dior opened a new concept store in the trendy Seongsu-dong neighborhood, which was inspired by Dior’s Paris headquarters. It features a garden and a lounge, furnished with the work of various Korean designers. The neighborhood is described to be in the beginning stage, reminiscent of the early days of New York’s Meatpacking District. The store will be there for at least a year and a half, with access to the store resting upon reservations. Within two hours of the launch, all appointments for May were filled. It is now fully booked until the end of June.

“The Korean market is important, period. But it’s clear that we take advantage of the growth here to compensate for some of the challenges in China,” says Beccari. Dior, however, is optimistic about China — “The curve of turnover follows exactly the curve of traffic In store.” When asked about future of Dior in South Korea, Beccari responded by saying, “Our retail footprint here could be much moree important.”

All Blackpink bandmates have partnered with major luxury brands as ambassadors. Rosé with Saint Laurent and Tiffany & Co., Lisa with Celine and Bulgari, and Jennie with Chanel and Calvin Klein. Squid Game star Ho-yeon Jung is working with Louis Vuitton’s womenswear.