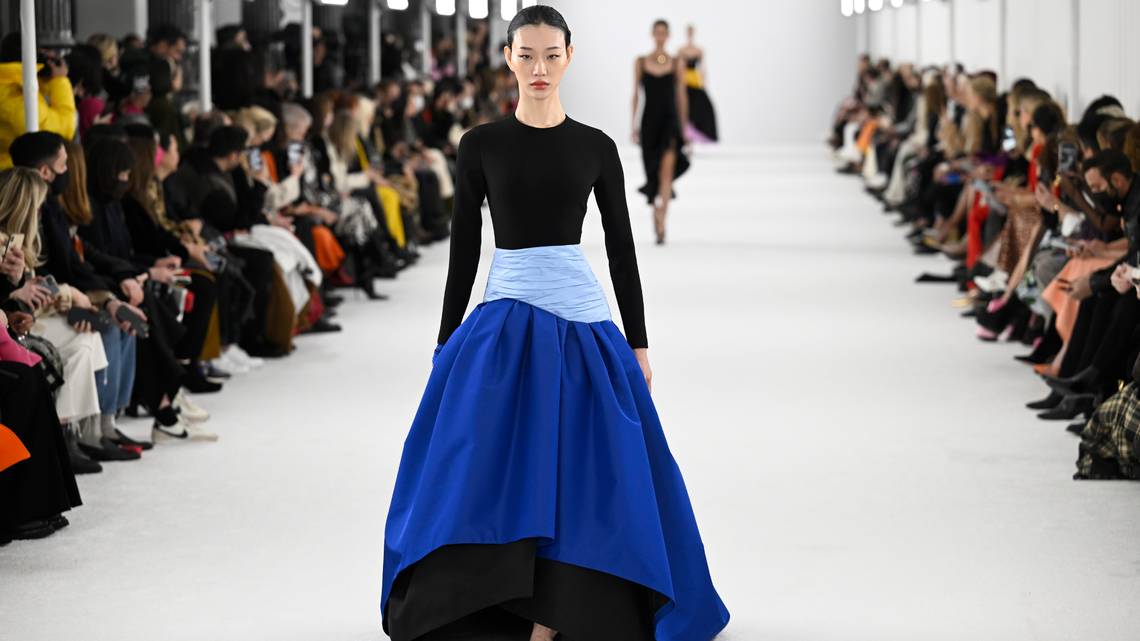 NEW YORK — Carolina Herrera’s models walked to Georges Bizet’s Habanera in an operatic crescendo that revealed one rich piece after another. The design house, iconic for its timeless formal wear, opted for a dramatic display of art.

The collection, designed by Wes Gordon, aimed to create “bold, heart pounding pieces” and that, it did. While the design house showed their signature uptown gala cocktail dresses and ladies-who-lunch knits, we fell in love with the sexy deep Vs and floating cups.

Shatteringly, the ball gowns are corseted, the waists accentuated with tulle — full of practical grandeur and dramatic full sleeves. The silhouettes are “markedly linear, featuring moments of exuberance like an undulating cascade”. We were treated to a bubble gum pink plissé tulle train, peplum skirts with color reveals at the hems, stove pipe trousers and classic crisp button downs.

Breathtaking florals and the exaggerated scale of Gordon’s sketches are enriched by shades of crushed berries, anemone blue, fire opal, deep peony, evening primrose yellow, and dahlia — as referenced in the show notes. The saturated jewel tones and embellished plackets, “inspired by the self-assured, strong, and full of fire Carolina Herrera woman.”

Wes Gordon’s Notes on the Show

“I’m obsessive when it comes to color; the first part of my process is to create the palette. I never like to use drab, dusty colors; the world is drab enough. So our colors are almost 110-percent pure pigment, and I find when they’re all on that same level of vibrancy, you can mix them in unexpected ways,” he said of the rich palette.

Gordon said he took inspiration from the Carolina Herrera global clientele — “They really are looking for the bold, dramatic, fabulous pieces, and it was really keeping them in mind that led to this collection.”

There were massive, oversized bows, structured blazers, jewel-encrusted collars, silk moirés, denim, and crisp taffetas and failles. The final leg of the showcase, featuring a Giambattista Valli-esque use of tulle, was the magnum opus — exhilarating and breathtaking, all at once.

The end of the show featured the traditional finale carousel with all of the models. It did not end there. Miro Hermes and Francois Bouchet, long time pattern-makers for the Carolina Herrera brand, joined Gordon for a final goodbye. They are retiring and this was their final show. Gordon noted, “Ultimately the craft is about everything we do, and I believe the moment is now to celebrate beautifully made clothes, and to enjoy wearing them as well.”