Barbie x Balmain and the Metaverse

Barbie x Balmain and the Metaverse

She’s a registered nurse, a rockstar, the perfect older sister, and the model of American iconography. In a Barbie world, why wouldn’t she wear Balmain? Mattel, American toy company, and French luxury house Balmain have unveiled their unprecedented partnership — BARBIE X BALMAIN.

The capsule collection features 50 + signature Balmain designs and accessories in an array of Barbie pink hues. In an interview with Vogue fashion writer Sarah Spellings, Balmain creative director Olivier Rousteing touches on one of his most prized pieces: a replica of a dress featured in his fall 2012 Fabergé-inspired collection. “‘I reproduced it exactly in pink, with all the straps and padding and Swarvoskis,’” he said.  In addition, three NFTs depicting Barbie and her friends will be auctioned. A one-of-a-kind Barbie scale version of the doll will be awarded to the highest bidder. 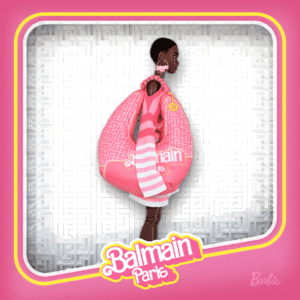 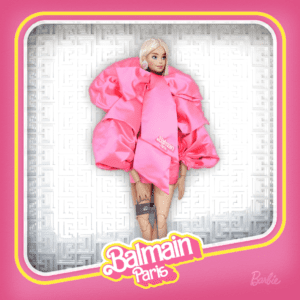 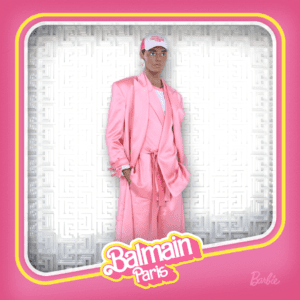 The three digital looks feature a striped sweater dress with a shoulder cut out and a bubblegum pink maxi pillow bag, a short voluminous dress with a maxi bow in pink silk satin, and a Ken avatar in a white cotton t-shirt with pink trim, a double-breasted blazer, and loose, pleated trousers — in pink satin, of course. Physical looks feature maxi puffer bags with the Balmain Paris logo scrawled on them in Barbie script, striped pajama sets, bouclé jackets with gold buttons, a mermaid gown, and baby-pink silk-satin suits, amongst other things.

“As our campaign images make very clear, Barbie and Balmain are embarking upon a distinctly multicultural, inclusive, and always joy-filled adventure,” said Rousteing. “For this collaboration, we are building upon the New French Style of Balmain’s most recent collections, once again showing that Balmain is inspired by the truly diverse and exciting beauty found on today’s Parisian boulevards and avenues. This collection also rejects any arbitrary gender limitations — this is an almost 100% unisex collection.”

The collection was designed by a boy who felt he wasn’t supposed to play with dolls and felt social rejection for it. “‘Having Barbie in my Balmain army, making a collection inspired by her where there are no boy clothes or girl clothes, is my small revenge,’” said Olivier Rousteing, the creative director of Balmain, “‘I think Barbie represents a joyful dream world. There’s nothing wrong with a dream. But let’s push the dream and not dream of the 1950s or 1960s, but 2022. For me, it’s a lot more than just a commercial project. It’s very emotional,’” he said in an interview with Vanessa Friedman of The New York Times.

In an interview with Vogue, Balmain Creative Director Olivier Rousteing touches on his inspiration for the collection. “‘It’s not only the dream of a designer, but it’s also a dream of a kid, you know?’ he says, adding that as a kid he was told not to play with the dolls. ‘That I can create a collection with Barbie today shows how the world has changed, and how good it feels to be free with yourself without being judged.’”

This isn’t Balmain’s first run with Barbie. In 2021, Barbie and Ken sat front row at a Balmain digital runway show, as Rousteing had made doll-sized clothes for her and the Claudia Schiffer Barbie. He isn’t the first to make clothes for her — there’s a long list of designers who’ve taken inspiration including Versace, Lagerfeld, and Jean-Paul Gaultier. More pointedly, let’s remember Jeremy Scott’s Moschino Spring 2015 Ready-to-Wear collection that had the crowd cheering at New York Fashion Week when “Hiya, Barbie!” rang through the loudspeakers.

With Omicron cases on the rise, the BARBIE X BALMAIN collection offers an escape from darkness, offering a peek into childhood. Richard Dickson, Mattel president, and chief operating officer believe that toys have the potential to be credible in fashion. In an interview with The New York Times, Dickon says, “People are looking for optimism and joy, especially now when life is very heavy. Toys are that by definition.” Created by Forget Me Not for the Balmain x Barbie® collaboration. Image sourced from Vogue.

The digital auction will take place on January 11 at 9 a.m. PT at NFT.MattelCreations.com. BARBIE X BALMAIN will be available on January 13 worldwide, with a special pop-up store featured at Neiman Marcus in North Park Dallas from January 13th to January 30th. Prices range from $295 to $42,494.