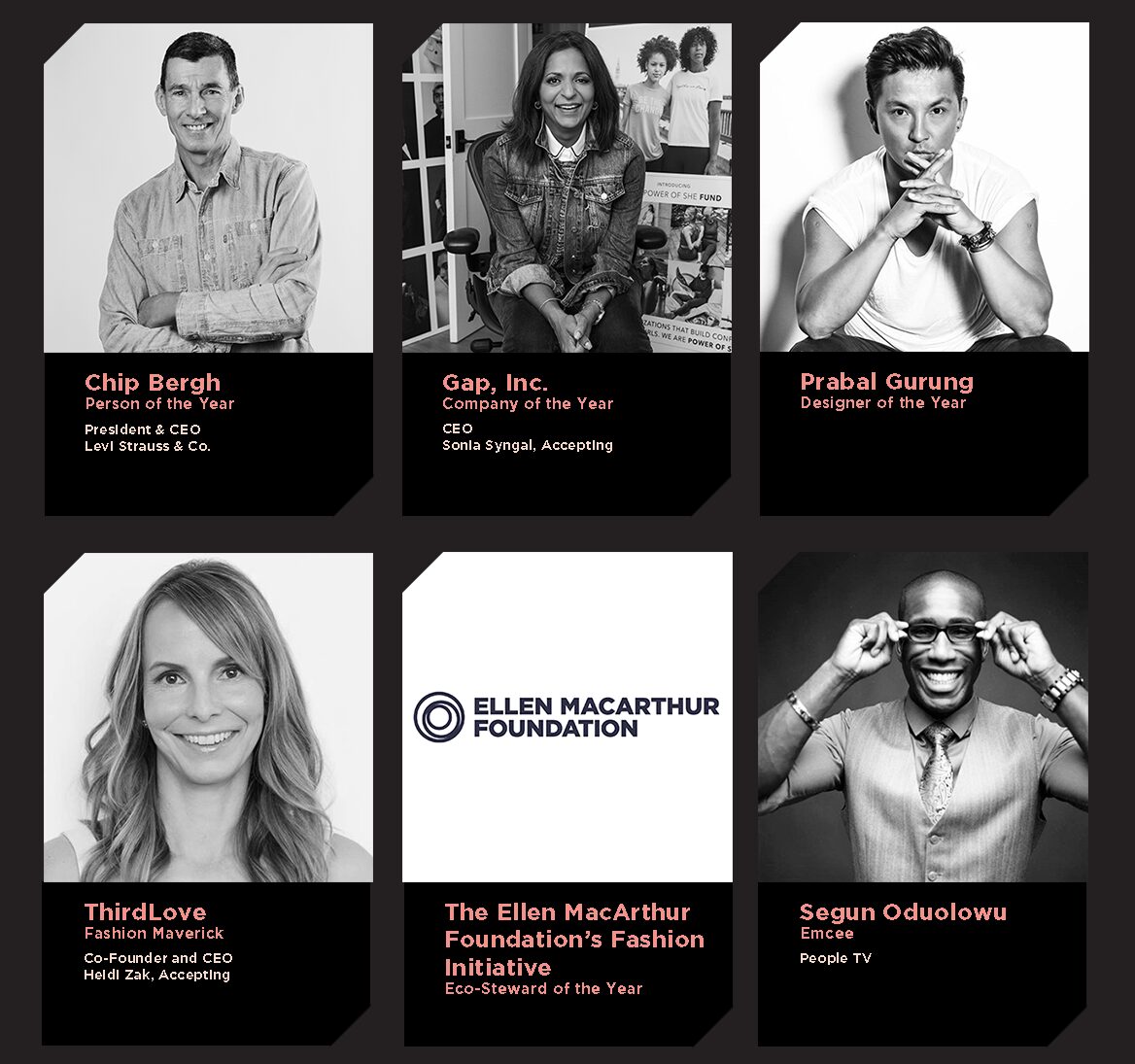 The American Apparel & Footwear Association (AAFA) announces outstanding individuals and companies to be honored for their leadership, excellence, and extraordinary achievements in all sectors of the apparel and footwear industry, including design, manufacturing, and retail. They will be honored at AAFA’s American Image Awards being held on Tuesday, April 26, 2022 at The Plaza Hotel in New York City.

Honorees include Chip Bergh – Person of the Year; Gap Inc. – Company of the Year; Prabal Gurung – Designer of the Year; ThirdLove – Fashion Maverick; and The Ellen MacArthur Foundation’s Fashion Initiative – Eco-Steward of the Year. The event will be emceed by Segun Oduolowu of People TV and will benefit the Council of Fashion Designers of America (CFDA) Foundation for a sixth year of philanthropic partnership.

“The American Image Awards has always been about excellence and achievement. In a new climate –both the realities of a global pandemic and the increasingly challenging business and environmental realities – innovation and stewardship continue to remain paramount,” said Steve Lamar, president and CEO of AAFA. “The 2022 honorees are truly trailblazers who galvanize their employees and their peers across this industry’s far-reaching supply chains to ensure impactful contributions to the American and global economies, to our stakeholder community, and the future of fashion.”

At Levi Strauss & Co. – one of the world’s largest brand-name apparel companies and a global leader in jeanswear, Chip Bergh has led the company to continued global expansion, a dramatic turnaround market by outstanding performance, and a return to the center of culture. The Levi’s® brand along with Dockers®, Signature by Levi Strauss & Co.™ and Denizen® are sold in more than 110 countries through a combination of chain retailers, department stores, online sites and a global footprint of approximately 3,000 retail stores and shop-in-shops. In April 2019, Chip was named one of the World’s Greatest Leaders by Fortune Magazine, and he has been widely recognized for his position on values-driven leadership, including his statements and actions on issues like gun-violence prevention, climate change and social and racial justice.

Gap Inc., a collection of purpose-led lifestyle brands, is the largest American specialty apparel company offering clothing, accessories, and personal care products for men, women, and children under the Old Navy, Gap, Banana Republic, and Athleta brands. The company uses omni-channel capabilities to bridge the digital world and physical stores to further enhance its shopping experience. Gap Inc. is guided by its purpose, Inclusive, by Design, and takes pride in creating products and experiences its customers love while doing right by its employees, communities, and planet. Gap Inc. products are available for purchase worldwide through company-operated stores, franchise stores, and e-commerce sites. Fiscal year 2020 net sales were $13.8 billion. Accepting the award will be CEO of Gap Inc., Sonia Syngal.

Designer of the Year – Prabal Gurung

Prabal Gurung launched his eponymous collection in February 2009 with a philosophy encompassing modern luxury, indelible style and an astute sense of glamour. The designer chooses to manufacture in New York City to uphold standards of quality while supporting the local community. The brand recognizes the importance of domestic production, particularly in respect to the quality of the finished product and helps to bring this awareness to an international audience. His focus on quality and innovation has placed Gurung at the forefront of American fashion with designs worn by leading ladies including First Lady Michelle Obama and the Duchess of Cambridge, to name a few. The designer has also collaborated with Target, MAC Cosmetics, TOMS, and Lane Bryant. He was named Global Creative Director of global jewelry brand Tasaki in September 2017.

ThirdLove is a women’s lifestyle brand focused on elevated essentials across bras, underwear, loungewear, and more, which are designed to support women feeling effortlessly comfortable and confident. To date, over 19 million women have found their fit with ThirdLove’s original Fit Finder® quiz and can now experience the next-generation 3D interactive fit and style experience via ThirdLove’s new virtual Fitting Room. ThirdLove supports the broader community through its TL Effect program, created to encourage and support early-stage companies run by female entrepreneurs of color and through the donation of more than $50 million worth of products to women in need.

The Ellen MacArthur Foundation’s Fashion Initiative ‘Make Fashion Circular’ was launched by the Ellen MacArthur Foundation at Copenhagen Fashion Summit 2017 and brings together leaders from across the fashion industry to work with cities, philanthropists, NGOs, and innovators. The Foundation’s Fashion Initiative is leading international efforts to stop waste and pollution by creating a circular economy for the industry, where products are used more, are made to be made again and are made from safe, recycled, or renewable inputs.

“Through the American Image Awards, the AAFA brings awareness to important issues facing our industry while celebrating its leaders who spearhead progress and change,” said Steven Kolb, CEO of the CFDA. “We are thankful for AAFA’s continued support, and look forward to our continued collaboration for years to come.”

Additional information on the American Image Awards, including table purchases, can be found at www.americanimageawards.org.

Supporters are encouraged to join the conversation using #AmericanImageAwards.