Once you hit it big in the sports world, it isn’t unheard of to see an athlete transition into acting for a bit. This can lead to some really fun surprises in movies even if there’s a little bit of stiff acting. The following is a list compiled of some of the biggest athlete cameos in movies.

MMA fighter turned actress, Gina Carano has a long list of films on her filmography. She often gets roles because directors specifically have her in mind for the part. One of her arguably best films during her successful acting career is the 2016 superhero comedy film where she plays mutant Angel Dust. The role suits her perfectly as her character is the do-more, talk-less kind of antagonist.

Angel Dust remains one of the most memorable parts of an already fun, hard-to-forget film. She currently stars on the Disney+ series Mandalorian as Cara Dune. 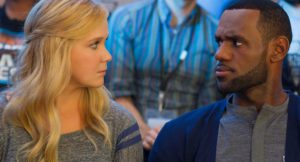 Lebron James is considered one of the greatest athletes of all time, but in 2015 he ventured into acting when he joined the cast of Trainwreck. He played opposite Bill Hader’s Dr. Aaron Conners as a cheapskate, fictional version of himself. One of my personal favorite cameos on this list, while some other athletes on this list are stiff in their roles, James is legitimately fun to watch on screen.

This may not be the end of his Hollywood career. He is slated to return to the big screen with the Space Jam sequel that Michael Jordan previously starred in in 2021. Following his retirement from basketball, I think it is safe to say that James has a real future in acting if he wants it. 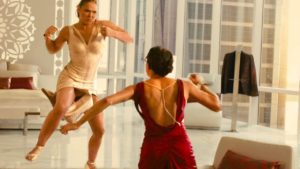 2015 saw another big athlete join Hollywood for a cameo. In the seventh installment of the Fast and Furious trilogy, Ronda Rousey played the head of security for a billionaire in Abu Dhabi. Her big scene is also one of the most entertaining scenes of the film where she fights Michelle Rodriguez’s Letty in skin tight evening gowns.

This movie and scene is pretty fitting for Rousey who is a bit of a stiff actor. Her inclusion in the high-adrenaline inducing action film allows her to show off her UFC chops and play a tough character that doesn’t sway too far from her UFC television persona. These days it seems her acting resume is only growing. Most recently she starred in a brief cameo in the 2019 remake of Charlie’s Angels. 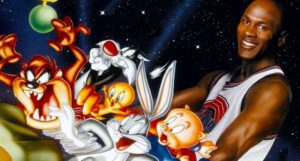 Unlike the other entries on this list, Michael Jordan played the titular role in the classic sports comedy. Like Lebron James, it’s safe to say Michael Jordan has made a name for himself on the court. This only makes the movie’s fictional take on what happened in the years between Jordan’s 1993 retirement and 1995 comeback from the NBA all the more fun.

Jordan more then holds his own as an actor in this film and is able to bring a lot of heart to the screen. 24 years later, this film still holds as one of the best comedy sports films. 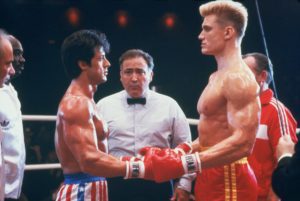 Dolph Lundgren was a former karate champion in the 80s and would later grace the screen in the iconic role, Ivan Drago in Rocky IV. Though this turn as Drago would just be the beginning of his acting career, it is certainly his most iconic role.

Though not an Academy-caliber actor, he still gets the job done in intimidating the audience and raising the stakes of the film. He would return in the role as Drago in the Creed sequel which would delve further into the psyche of the Drago character through the match between his son and Creed. Both films are definite must-watches.