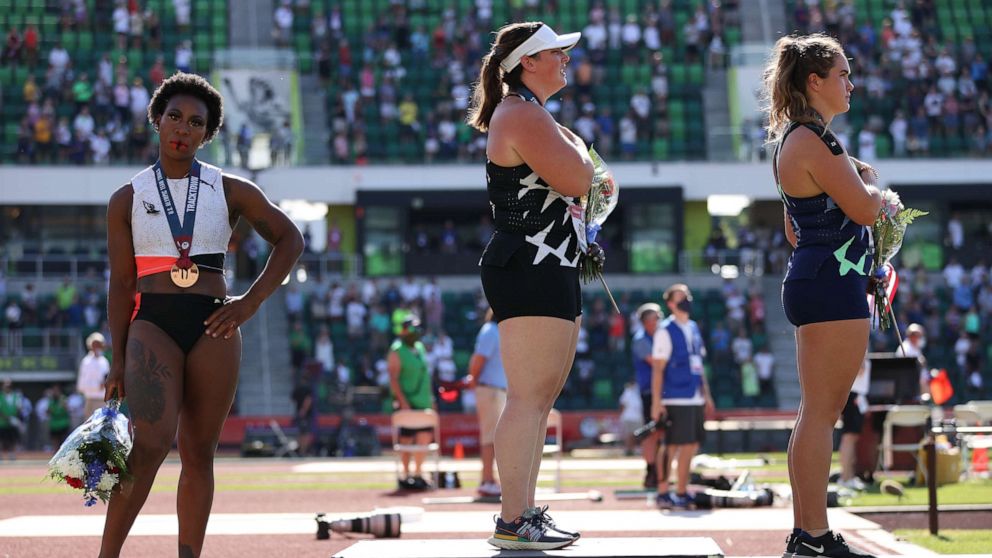 In a society where Blackness has always been seen as inherently political, Black athletes have always been on the receiving end of criticism and controversy, whether they initially intended to be political or not. Due to their hypervisible status as public figures and expectations to be a credit to their race, Black athletes are often held to a much higher standard than non-Black athletes, with their every move constantly being placed under a microscope.

With that being said, the general public has often frowned upon Black athletes for practicing their first amendment rights. Whether it be Naomi Osaka refusing to do press and media coverage for the sake of her mental health, or Colin Kaepernick kneeling to bring awareness to police violence against Black bodies, Black athletes have often been demonized for not keeping quiet and just playing the game.

Recently, olympic hammer thrower Gwen Berry has been the recipient of much disdain and scorn. On Saturday, June 26th, Berry turned her back on the American flag during the playing of the “Star-Spangled Banner” at a sports event. She did this because of her belief that the American flag is disrespectful to Black people. So, she refused to show respect for a flag that she knew wasn’t respectful to her.

“I never said that I hated the country. I never said that. All I said was I respect my people enough to not stand for or acknowledge something that disrespects them. I love my people. Point blank, period,” she said in an interview with the Black News Channel.

As a result of this, many conservatives have utilized their platforms in order to call her out and shame her for what they see as unpatriotic and disrespectful behavior. Big time members of the GOP, such as Senator Tom Cotton of Arkansas (R-AR) and Representative Dan Crenshaw (R-TX) have both expressed their outrage, calling for the removal of Berry from the olympic team.

For Black American athletes, standing up for what you believe in and taking the heat for it is not a new phenomenon. Berry comes from a long line of Black athletes who came before her and paved the way for her to speak her truth when she finds it necessary. To be a Black athlete in America is to see people that look just like you become victims of a corrupt system that doesn’t value human life, and then receive little to no justice afterwards. Furthermore, many Black athletes were either blacklisted or lost their endorsements when they were said to have done something wrong, even during times we’re not speaking up was simply not an option because of dire circumstances.

At the 1968 Summer Olympics in Mexico City, Tommie Smith and John Carlos, two Black American athletes, had their careers destroyed after raising the Black Power salute to protest racial injustice and discrimination in the United States. The Reverend Dr. Martin Luther King. Jr, had only been assassinated a few months prior. The actions of Smith and Carlos caused them to be vilified, and as a result they were both suspended from the U.S. team and faced much mistreatment once they were home in the states.

50 years later in 2018, two Black athletes were once again vilified by the press for expressing their opinions as it relates to politics and race relations. In an interview for ESPN, Kevin Durant and LeBron James both shared their feelings of dissatisfaction towards President Donald Trump, saying that America as a team isn’t being run by a good coach, nor are they shocked anymore when they hear him make racist comments.

In response to what she felt were inappropriate comments, Fox News anchor Laura Ingraham stated that they should both “shut up and dribble,” suggesting that they simply focus on being athletes rather than discussing politics, because athletes are what they get paid to be.

Gwen Berry’s act of protest is not just an isolated event, but rather, a warranted reaction after a long history of attempts by other Black athletes to make their voices heard in a world that wants their talents and nothing more. To Black American athletes, Berry’s act of resistance is another in a long line of rightful protests against the mistreatment of those who look like her. It represents the fact that the fight for justice is not yet over, and that the struggle still continues to this very day.