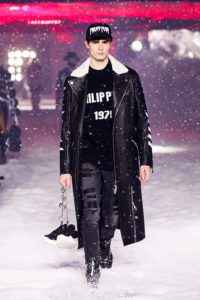 It’s crazy to think that such a generic trademark as skull and bones can have such a big impact on the world! Or is it his claim to wealth before diving into the fashion industry that gave him his boost of popularity? Originally from Munich, Germany, Phillipp Plein was recognized for his designs in 1998 where he switched career paths from studying law to pursuing interior design after receiving notable praise, motivating him to get into the business beginning in one of the richest countries in the world: Switzerland.

In 2004, his namesake initiated, after designing a lounge set for a Moet & Chandon event in Germany. His ready-to-wear line didn’t launch until 2008 where he moved on to create military embroidered jackets with Swarovski crystals, the notorious theme to his brand. Constantly seeking opportunities gave him the luxury to be luxury, opening superfluous amounts of boutiques and showrooms in the all the major fashion capitals worldwide and he did so rapidly.

By 2008, he was in Couture and continued to stay busy promoting his label at major events in Europe and Asia,  gaining momentum in America after he landed a spot in the Fall/Winter 2011 Milan Fashion Week where the buzz on the streets traveled like wildfire. Lindsay Lohan was the face of his campaign in 2012. He even negotiated a deal with AS Roma to design the uniform for soccer teams for four seasons.

Just like his scattered designs reflect profligacy, his business ethic seems to follow the same pattern, dispersing himself in so many directions like glitter popping out of a balloon. In 2013, he opened more stores in Moscow, Paris, Miami, New York, Hangzhou, Casablanca, and Seoul. That’s not to say it was difficult popularizing a logo in these places where youth is abundant and the logo raises brows effortlessly. People everywhere especially heavy metal fans and rock lovers embrace the symbol of the “skull and bones” and with a little celebrity limelight to keep it flowing mainstream and a lot of money and support from powerful companies and organizations, the brand gained much attention that caused waves of interest.

Rita Ora, Naomi Campbell, Grace Jones, Floyd Mayweather, and Fergie are just a few people who wear the label. How that naturally affects all avenues of marketability from different genres in music, sports, and fashion, gives the label potential to be lucrative, as these faces attract people to follow in their foot steps, and consumer behavior works well with its flashy impulse.

In 2017 he entered New York Fashion Week both men’s and women’s. His extravagant scenery and outrageous style is captured through all his sets and after parties. That said, his explosively wild and lavish persona can make him feel like too much of a trend.

As seasons continue however, he defines “Phillipp Plein” authentically with the high quality leathers, crystals and fabrics that complement the ostentatious code of fashion the label represents. Take a look at some items in store!