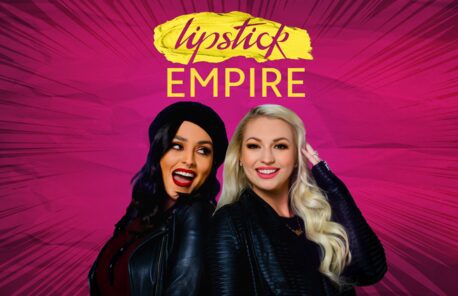 If you’ve ever wondered how complicated and daunting starting a makeup brand could be, Lora and Dana couldn’t tell you. For them, it all started out when they worked at opposite beauty counters and realized they share a love for matte lipsticks. For them, it was the need to have more colorful matte lipsticks, but having no where to find them. Starting the brand Melt Cosmetics was as simple as thinking, “well, if we can’t find any bold lipsticks on the market, we’ll make our own.” With a little saved up money and determination, Melt Cosmetics was born, and has been thriving as an independent makeup brand ever since.

Right away, Lora and Dana aren’t afraid to show who they really are. Their personalities speak through the products they launch, and their differences between each other even more.

Lora’s office is decorated in red, with bat decals and dark furniture. Even when she takes us on a tour of her house, she said herself she likes going for a dark, strange and eerie feel. Dana is on the opposite side. Her office in the Melt Cosmetics HQ is bright with big art pieces–and with modern taste. To me, Lora and Dana are the perfect example of “opposites attract.” Lora and Dana’s different tastes and ‘vibes’ surely reflect in the brand they have created together: that any look and any creative spark in the world of makeup can melt into something never seen before.

Melt Cosmetics is the counter culture of makeup. It’s every aspect you don’t think of society’s norm melted together that creates this brand of rebellion and makeup. Makeup can be edgy, makeup can be whatever you want it to be. This idea is shown throughout the series. Lora and Dana put so much time and thought into campaigns for new products, such as the star of the show the ‘Gunmetal Stack’ eyeshadows. Instead of a modern studio for the photoshoot, they opted for an antique house, to showcase the ‘feel’ of the ‘Gunmetal Stack.’

The first few episodes show the two, along with their team of friends and family, prepping for the launch of the eyeshadows. Not only does that mean making sure the photoshoot is done, and also planning a BBQ sale, but it means perfecting the formula of the shadows–multiple times. It is stressful and at a times worrisome, since they have a launch date to meet, but Lora and Dana aren’t afraid to take risks and slow the process if it means getting the product absolutely perfect. It is refreshing to see so much thought put behind a brand with customers and fans being top priority.

Aside from the makeup, Lora and Dana are dealing with their busy lives. Lora loves running the business with Dana, but she also has to take her personal career as a makeup artist seriously. She meets with her agent once in the show, and she is faced to make a decision to leave for two days to do Shaunie O’Neal’s makeup, right before the big launch of the eyeshadows. Dana has to plan her wedding with her fiance, Jake. Still, Lora and Dana find an even balance between work life and personal life, and of course, makeup.

Lipstick Empire is as entertaining as you can imagine a series about makeup is: product development, getting to know the creators behind the brand, how business deals work and the discussions that need to be had before making a deal, planning special events and maybe finding inspiration to go to the next level when it comes to playing with makeup. What Melt Cosmetics stands for all comes from the creators behind it: boldness and being yourself.

From Stage13, Lipstick Empire is now streaming all 12 episodes on HBOMax.