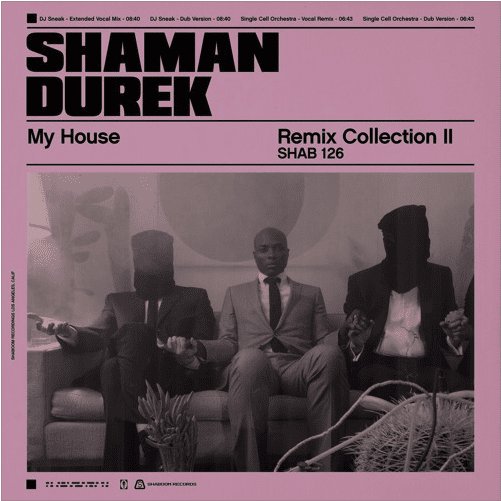 In September of 2022, Shaman Durek released a set of My House Blakkat Remixes. Now in January 2023, he is back!

He returns with a new collection titled My House Remix Collection II, featuring five remixes of the single “My House.”

Significantly, Single Cell Orchestra’s first successful track “Transmit Liberation,” released in 1995, became one of the leading influences towards the development of the cult-classic sub-genre trip-hop. Having him featured on these remixes with Durek is a real treat to the electronic music genre, calling upon its roots.

The first track titled “My House-DJ Sneak Radio Mix” is a song of loving trance, with a hypnotic and striking high-hat driving the rhythm along. His spoken word through the whole song has a commanding and exciting presence.

Durek is sending motivation out to his fans with lines like:

In his new remix collection, Durek is breathing new life into listeners, by emitting positivity and self-empowerment. Urging them to get up and dance care-free for a moment.

The song also features ambient techno textures with the inclusion of piano, employing a very upbeat and fabulous intonation. This kind of inflection speaks to Durek’s spiritual healing roots as a 6th generation shaman.

Durek’s remix “Single Cell Orchestra Dub Mix” is a stark and colorful re-imagination of the first song “My House.” While keeping the original spoken word lines “You can dance in my house” they have created whole new rhythm with this song.

Some of the elements include the use of electronic instruments, and a prominent bass line. This adds a hypnotic sound with a new-age flare to this remix about character and spiritual awakenings; All the while it still maintains the songs original message.

Overall, the My House Remix Collection II is a fun loving and cheeky romp for reclaiming your own personal power, and gives plenty opportunity to let loose and just dance, which is liberating in and of itself.