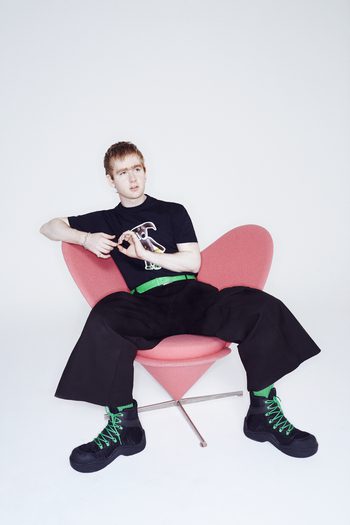 Vert, PinkPantheress and Shygirl, the album’s lead single released in February, which was featured in The New York Times Playlist and praised by FADER as “undeniable.” Late last year, Mura Masa teased Demon Time with the surprise track “2gether,” which followed collaborations with Shygirl—on a rework of Lady Gaga’s “Sour Candy” for her remix album Dawn of Chromatica—and PinkPantheress—on “Just For Me” from her breakout debut.While making Demon Time, Mura Masa— the 25-year-old songwriter, producer and multi-instrumentalist Alex Crossan—only had one question in mind: “What’s the most fun thing we can do?” The “we” he is referring to is the extensive roster of friends and collaborators he wrangled for his third album—including Shygirl, Channel Tres, Erika De Casier, Nao, Bayli, Isabella Lovestory and several others—with Mura Masa acting as the puppet master of sorts, employing his technical mastery to splice the most exciting elements together and hone the album’s central theme—pure, unbridled fun. For previous albums, Crossan busied himself compiling documents of musical references, moodboards and various thoughts and ideas to steer his creation process. This time, he was inspired by a note on his phone that just said one word in capital letters: FUN.The name of the album refers to those early morning hours at a party or with friends where a delivish yet innocent sense of mischief prevails, a headspace that Mura Masa felt was crucial to tap into following two heavy years of pandemic blues.

Rather than continuing to explore his last album’s preoccupation with nostalgia and a world of imagined memories, Mura Masa went in the opposite direction, opting for a tongue-in-cheek, hedonistic response to combat the absurdity of it all. “It’s devil on the shoulder type fun. Not necessarily the most wholesome, but it’s a really good time,” he says with a wink and a smile.Mura Masa—the 25-year-old songwriter, producer and multi-instrumentalist Alex Crossan—has released two critically acclaimed albums, toured the world, and collaborated and shared stages with some of today’s most thrilling artists. His self-titled 2017 debut catapulted him into the international spotlight, and his 2020 album R.Y.C. attracted widespread critical acclaim with collaborations from Tirzah, Clairo, slowthai, Georgia and more. Known for his ground-breaking, boundary-pushing production, Mura Masa won his first Grammy Award in 2019, following two additional nominations for his acclaimed self-titled debut album, making him the first artist in history to be nominated as both a musician and creative director for the same album. He’s nominated for his fourth Grammy this year, up for Best Remixed Recording for his rework of PVA’s “Talks.” Throughout his career, Mura Masa has toured the world over, headlining shows worldwide and playing sets at Coachella, Primavera Sound and many more.