Director David Serero Unfolds The Making Of The Ten Commandments, The Musical! 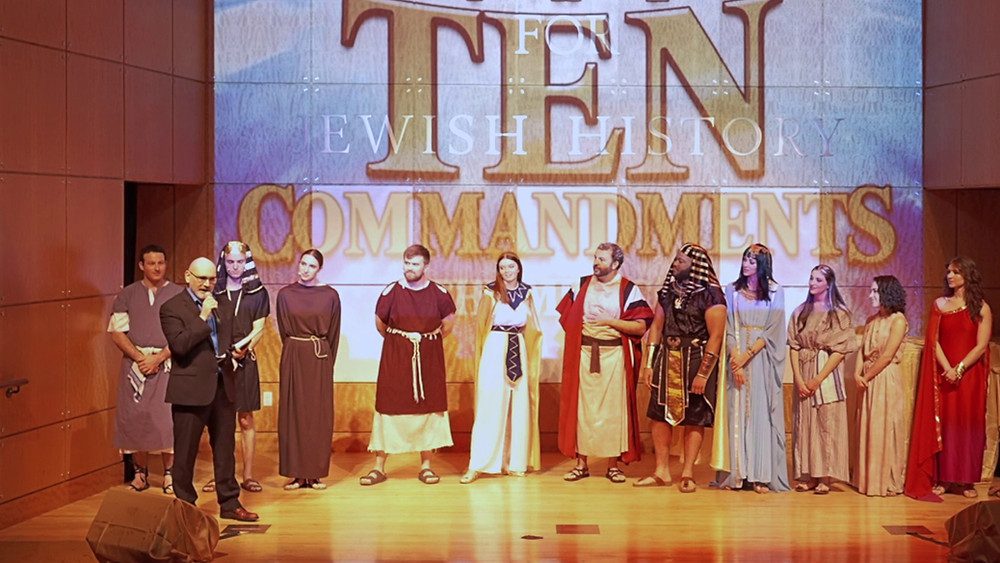 Director David Serero Unfolds The Making Of The Ten Commandments, The Musical!

Almost 20 years after its opening in Paris,” The Ten Commandments” (Les Dix Commandements) was premiered on May 5th at the Center for Jewish History for the first time to English-speaking audiences. The Musical’s U.S. premiere was brought in with standing ovations for its beauty of love, truth, and freedom. Its Off-Broadway cast is a diverse group of twelve artists who bring the story of Moses and the Jewish people to the stage, touching audiences’ hearts for its limited showing.The artistic work with over 3 million spectators in Europe has a newfound revival recording and a stage adaptation created by the baritone and producer David Serero, who wrote the English adaptation and the American theatrical production with its first single recording, titled The Maximum Pain (La Peine Maximum), released on all platforms. All performers in the original show sang the music of Pascal Obispo, one of France’s most notorious composers, with original lyrics by Lionel Florence and Patrice Guirao. The Musical was originally staged by Elie Chouraqui, who wrote the book. David Serero, director, producer, and actor, brought this musical to life and staged the show to respect Broadway standards and culture. The Ten Commandments, The Musical dramatizes the biblical story of the life of Moses. This adopted Egyptian prince becomes the deliverer of his real brethren, the enslaved Hebrews, and after that, he leads to Exodus to Mount Sinai, where he receives the Ten Commandments from God. David Serero, starring as Moses, leads the cast with DaShaun Williams (Ramses), Caroline Purdy (Nefertari), Lisa Monde (Bithia), Cale Rausch (Joshua), Zachary Harris Martin (Aaron), Kristyn Vario (Myriam), Stephanie Craven (Sephora) Julia Anne Cohen and Andy Donnelly (various roles).

This is the unfolding of the making of the Ten Commandments, The Musical! coming from the extraordinaire Director, Producer, and Actor David Serero:

HOW DID YOU GET THE TEN COMMANDMENTS TO NEW YORK? WHEN DID THIS ALL START?

When I saw the Ten Commandments, I told myself that I would bring it to New York, the city of musicals. I thought the theme, the music, and what I wanted to show in the musical were forever contemporary. The talk at the show’s end is as important as the show. I want people to leave with something to think of. Even though it is the oldest story of all time, it is still the most contemporary story today regarding love, trust, jealousy, ego, and the hunger for power. Even though the Ten Commandments was first produced in 2000, I needed to find a way to bring it to the American audience of 2022. I had the idea right before COVID started. I spoke with one of the authors I invited to New York. I told him I really would like to put this musical together because I am in a position where I can schedule anything I want in New York. I worked hard to make the musical happen. Even though I had not yet the authorization, I proceeded to do the demo recordings.

Afterward, I sent the recordings to the authors, and they kindly agreed to let me proceed.

It’s very modern because I Americanized it with America’s vocal culture, different from France’s. I used Broadway and lyrical singers, and the audiences of both France and worldwide were very impressed with the results. This era that we live in with coronavirus separating each other motivated me, even more to bring this show to life and bring people together.

WHAT ARE THE DIFFERENCES BETWEEN THE FRENCH VERSION AND THE AMERICAN VERSION? HOW DID YOU HONE DOWN A TWO-HOUR SHOW TO AN HOUR MUSICAL?

The French version was a gigantic production. I didn’t only make an English adaptation but an American musical adaptation of the show. I wanted to detach the piece from the original French show. The French version had 50 dancers and 200 people on stage, so it was challenging to tone it down to a theatrical realistic Off-Broadway production. I believe that each director has their style and color. As I like to call it, my signature is very “champagne.” It’s very efficient, and I go straight to the point and move the plot fast, as action movies do. If a word or a line isn’t necessarily in the script, I remove it. I go through each phrase to make it the best. I wouldn’t say I like things that take forever on stage. I want to give the most concentrated juice! I add a speech after the show and improvise with the audience to connect with them and offer them the most outstanding theatrical experience.

WHAT WAS THE CREATOR OF THE ORIGINAL SHOW, ELIE CHOURAQUI, FEELINGS BEHIND THE MAKING OF THE MUSICAL?

Elie, but also Mr. Obispo, Guirao, and Florence all totally encouraged and supported me. They gave me all freedom to go for it. I couldn’t work properly without that freedom to express my vision. Any businessman would tell you to know your audience, and I know mine very well. I knew that if I brought the show the way it was presented in Paris, to New York, it wouldn’t have worked because it’s not part of the American culture to have a musical without any dialogues. I wanted to bring the story arc through dialogue. The authors know that I’m very detail-oriented, and I would do everything that I physically and humanly possibly could to make the best rendition possible. I’m the only person who received all the author’s approval to do it in English.

HOW DID CASTING GO? HOW DO YOU CHOOSE ALL OF YOUR ACTORS?

I’ve always been very efficient at casting the right elements as I am a singer and actor. When I direct singers, I know a lot about how they feel inside and how to make the best out of them come out. When you cast people, you can always find better singers and better actors, but my priority is to find people with great personalities and where I can make them grow. Some directors will tell actors that they can do whatever they want on stage, and then they direct a bit there. For myself, I know exactly how I want each character to speak, sound, move, walk, and breathe on stage. My actors combine to that vision and enhance it with their personalities. Rest assured, after each performance, before every show; I have three or four pages of notes that I give to all the actors. I am even more critical of myself. I do everything to inspire everyone to be at their best every night. I owe it to everyone, as well as the audience.

THERE IS AN ARRAY OF DIFFERENT WALKS OF LIFE THAT WERE APART OF THE PRODUCTION OF THE TEN COMMANDMENTS. HOW IMPORTANT IS DIVERSITY WHEN IT COMES TO THE PEOPLE THAT GET TO WORK WITH YOU?

I’m very proud to have brought a lot of diversity to my production. From the actors I chose to the technicians, there is always diversity in every production of mine. Significantly, people need to know that diversity is not a charity. Diversity is not just based on a person’s skin color but on bringing their own culture to something. It can also connect to the training and career, such as I gave Shakespeare roles to standup comedians, and they delivered the lines as no one would. I encourage all ethnicities not to be afraid to go for any role they are trying to get.

SINCE THE SHOW HAD LIMITED SHOWINGS, WILL THE TEN COMMANDMENTS BE EXTENDED? WILL IT TRAVEL AROUND TO OTHER PLACES FOR MORE PEOPLE TO SEE?

Many people have left the city of New York. They have moved, and many people are now used to watching entertainment at home. The good thing with the English language is that it can travel to many countries, so I have some meetings and offers already scheduled for places that accept the English adaptation. This would be more established this month of June. I have some offers to bring to Dubai, as it has become a symbol of tolerance and bringing people together. The show would be very successful in Dubai, and I have a firm offer from Dubai also; why not get it to Israel and do it at Mount Sinai itself? Maybe Egypt and Israel. I hope to make an extension in New York and more locations in the United States.

WHAT OTHER PROJECTS ARE YOU WORKING ON RIGHT NOW? WHAT’S NEXT?

I’m currently following the success of my documentary, The United States of Elie Tahari. It was my first documentary. It’s available on Vimeo on demand. It toured to more than 100 film festivals and has won many awards. I have six documentaries that I’m working on. Three of them have been filmed, and I’m currently working on editing in post-production. The studio album for The Ten Commandments, the Musical is recorded. I was offered several iconic French works to adapt to the English language and record. I would love to bring the musical to Miami, which I’ve heard doesn’t have a big musical theater scene. As always, upward and forward!

David Serero recently received the Musical Theater Radio Award for Theatrical Excellence after his performance in The Ten Commandments, The Musical! from the President and Founder of the Musical Theater Radio, Jean-Paul Yovanoff. A critically acclaimed award-winning opera singer, actor, director, and producer, Serero has performed in more than 2,500 performances in. more than 45 countries, directed and produced nearly 100 theatrical productions, starred in over 100 films and TV series, recorded and produced almost 100 albums, and has played around 50 lead and title roles (in several languages) from the opera, theatre, and musical world. In New York, he starred off-broadway in iconic roles such as Shylock, Cyrano, Othello, Barabas, King Lear, Don Giovanni, Figaro, Romeo, Nabucco, and new works such as Napolean by Kubrick, Queen Esther, Anne Frank a musical, among others. In his native Paris, he also starred as Don Quixote (Man of La Mancha) and Happy Mac (Beggar’s Holiday by Duke Ellington).

Serero is inducted into the esteemed Who’s Who America for demonstrating outstanding achievements in the entertainment world and for the betterment of contemporary society. In 2019, David received the Albert Nelson Marquis Lifetime Achievement Award, the Trophy of the Culture of Morroco, and was named among the fifteen most influential Moroccans worldwide by Morroco’s airline Royal Air Maroc. David is a member of the Recording Academy and the Television Academy and a voting member of the Grammy’s and Emmy’s.

In 2020, David Serero received the UNESCO Award for Diversity in Paris and became an Honorary Member of the United Nations of Arts and Science. In 2021, he won four BroadwayWorld Awards for Best Performer of the decade, Best Opera singer of the Year, and the Certificate of Recognition by the Mayor of New York (Bill de Blasio), for his contribution to the City’s dynamic cultural landscape and enriching the performing arts sector for uplifting and inspiring diverse New Yorkers, In 2021, his first documentary film. on fashion designer Elie Tahari received nearly 100 film festival selections and won dozens of awards including Best Director, Best Documentary, Best Fashion Documentary, and Best Producer.